Blackie and Twinkydink are six-year old Australorps. Last fall I was sure that Blackie wouldn’t last the winter. She slowed down and spent most of her days sleeping in the sun. Egg laying ceased. She went from being a dominant hen to one that kept to the sidelines. She felt skinny. Other hens died of tumors and reproductive diseases but Blackie continued to roost, eat, and poop. Her feathers became scraggly, then her neck went bare, which is like a bull’s eye target calling for the other hens to peck it. I sprayed blu-kote on the reddened skin. Dark again, the hens left it alone.

Blackie has been looking worse and worse. She’s lost the feathers along her back and so she’s been subject to more pecking. Blackie hides on the roost during the day and tries to avoid the other hens during her brief forays in the yard. She’s not getting enough to eat. I’ve been hand-feeding her in the morning, but her crop is never full. Her time has come, and yet she doesn’t die. 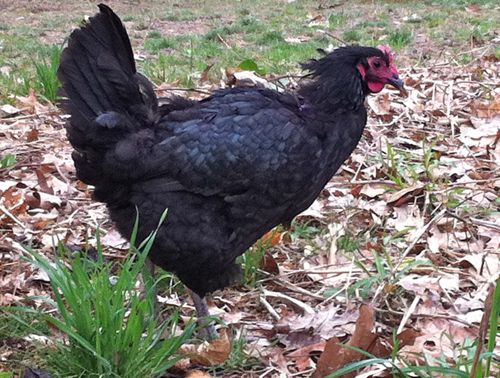 I like to let the hens live out their days, and, although Blackie looks moth-eaten, she’s still ticking. I’ve no idea how long she can last like this, or what is going on inside of her, but, it’s become clear that the biggest threat to her are the other hens, especially the young and active Golden Comets. Those two have been going after all of the hens, asserting their dominance and being all-around trouble. The other hens get out of their way, but Blackie can’t. I don’t want Blackie to die by bullying, and so today I moved her into what was to be the broody coop.

This is the first springtime that I haven’t had a broody hen. Of course, this is the one spring that I’ve wanted one – to care for the new chicks. I’m sad not to have a clutch of little peeps in the charming house that Lauren and I made, but instead of being a nursery, it’s become a retirement home. 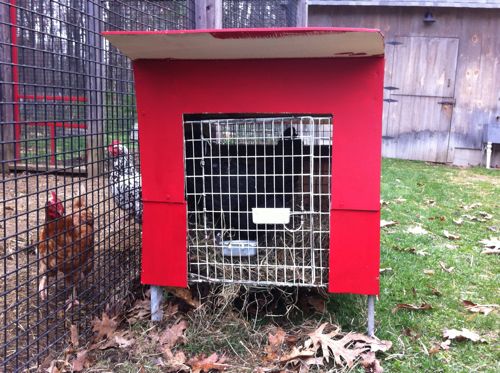 Blackie is inside, nestled in hay, with food and water all to herself. I’m sure she’ll be restless this evening, wanting to roost. Chickens hate change. But, I think she’ll quickly settle into her new place. I’m not sure where we’ll end up putting it – I want the house inside of secure fencing at night. For now, though, she can see the other hens, and they can see her. Lulu is jealous.