For most people, the day of eating and eating and gathering at the table, and sitting and talking, and eating some more, is over. You’re on to leftovers. My Thanksgiving food tradition is still two days away. This year, I’ll have just under 30 people to my pie party. Each person eats a half pie each. I kid you not. Well, that’s an average, taking into account a few teenage boys. Do the math. I need fifteen pies.

All year long I keep an eye out for pie recipes. I collect pie cookbooks, and I have a folder filled with clippings from magazines and newspapers. Each year I craft a menu that’s different from the previous years’. I like a variety and I like some of the pies to be ones that my guests haven’t had before. But, I also need to have classic apple pie (my specialty.) I never have pumpkin pie. I figure that everyone has had enough of that. My menu is balanced between custard and fruit, chocolate and nuts. In recent years, due to requests, I’ve added savory pies. Some of the pies are complicated. Very. Some pies can be made ahead. I have eight in the freezer right now. Some crusts can be made ahead. Here I’m rolling out a savory, peppery crust for a butternut squash galette. 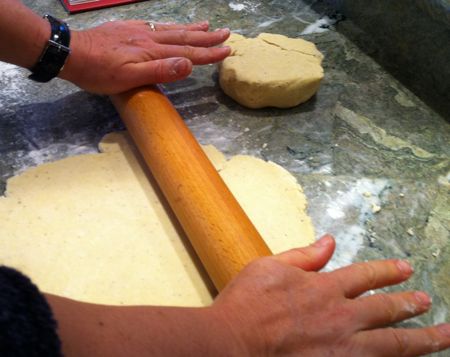 This crust can be frozen, but the pie itself can’t be put together until the last minute. Other recipes have to be constructed at the last minute. A detailed to-do list is essential. I have a master list, and a schedule of when to prep what.

I fume and fuss, and yesterday I had a snit over a poorly written recipe for a ground peanut crust that was too heavy on the sugar, but I do love all of this baking. And I really love eating the pies.

Here is the pie list for 2010. It might change. You never know what will need tweaking as those last pies are made.

Did you have a special pie yesterday? Tell me about it! I might be able to find the time to make another.