When I go into the coop in the morning, all of the hens are on the floor, waiting at the pop door, eager to go out. All except Petunia. She is still on the top roost, fluffed up. Hopping up the roosts to her sleeping spot isn’t too hard, but getting down is difficult for this old hen. I pick her up and gently put her on the coop’s floor. She doesn’t hurry outside with the others. I worry. 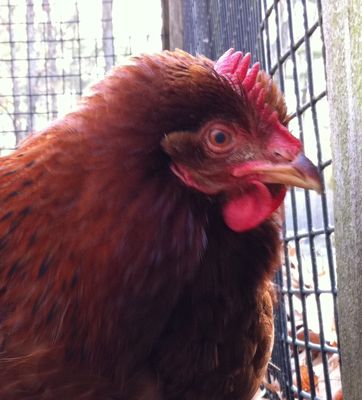 Her eyes are bright. Her wattles red and flexible. Her feathers luxurious. She’s eating. But, her body language tells me that she is uncomfortable. Possibly not here for much longer. 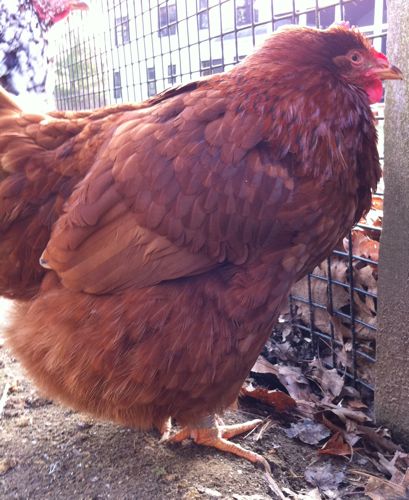 See how she holds her shoulders hunched? And how her bottom is low to the ground? And, she is facing out, with her back to the other hens. That’s a protective stance. Old hens get arthritis and tumors, cancer and liver disease. Their ovaries become enlarged. I don’t know what’s going on inside of Petunia. She doesn’t have a fearful look in her eye that animals in pain have. Eleanor, the barred rock in the big barn, has been walking around like this, old and creaky and slow, for over a year. Somehow, though, I think that Petunia is not going to be able to keep going.

Petunia is one of twenty-five chicks that a friend got in a shipment from Murray McMurray Hatchery. They hatched on October 6, 2004. I got five chicks from her a few weeks later. Amazingly, three remain. Ginger, who laid beautiful blue eggs, died two years ago. Cause unknown. Petunia’s sister New Hampshire Red, Marge, died this past summer  after a week of internal laying. Maybe that’s Petunia’s problem, too.

Six is old, really old, for a hen. I’ll do my best to keep Petunia and the other elderly residents comfortable. But, I expect losses this winter. I’ll miss these old birds that I’ve gotten to know so well, but it’s okay. It’s what happens. I’m planning on getting chicks in the spring. I’m looking forward to that. And, who knows, maybe these old hens will keep on going. Eleanor and Buffy have certainly surprised me. I was sure that neither would make it through last winter and here they are!

It’s a lovely day. I think I’ll let the old girls out for a walk around a sun bath in the leaves.