What with molting, shortened days, colder weather, and aging hens, I expected egg production to trail off this month, and it has. On Thursday, I went from collecting two eggs (from 14 hens) to none. Oh well, I thought. On Friday, there were still no eggs, which was really too bad because my son with the broken elbow has been asking for scrambled eggs every morning. In the afternoon I took the compost bucket out to the big barn’s run and found these: 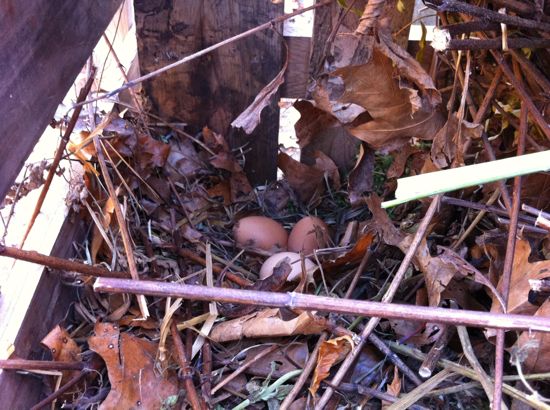 They are very well hidden, nestled in the end-of-garden refuse and dead leaves. They’re also in a corner that I don’t usually look in. Here’s a view from outside the bin: 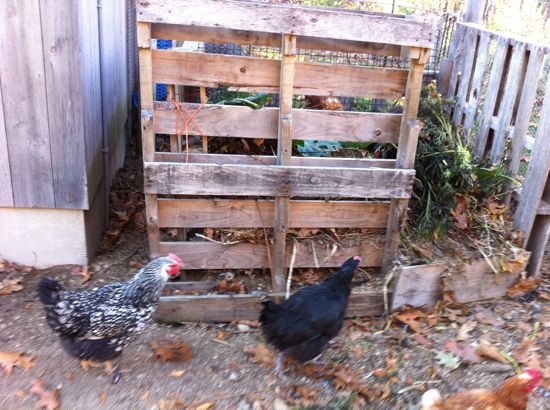 The eggs are in that front, left corner.

While hiding a cache of eggs isn’t unusual on many farms, it is here. This is the first time in over fifteen years of keeping hens that my girls have hidden their  eggs. I’m not sure what prompted the change. As far as I can tell, there’s nothing different with their nesting boxes. Maybe the way the materials were tossed into the compost made that corner irresistible?

Or, perhaps there’s something going on that I don’t know about. The other day, Lily was acting strangely. She kept asking to go out. Then in. Then out, where she’d station herself in the center of the lawn in an attentive sit. Also, the HenCam barn hens spent a nice, sunny day indoors, which is totally out of the ordinary behavior for them. My hunch is there’s been a predator around, and judging by Lily’s tension, it’s not one she’s familiar with. Maybe the bear that destroyed our bird feeders two years ago is back.

In any case, I want the hens to lay their precious eggs indoors. I put a wooden egg in the nesting box, and the hens went right back to laying where they’re supposed to.

I was pretty sure that the eggs were fresh and in good shape, but I checked to make sure. Old eggs develop an air sac and float in water. Fresh eggs sink. Eggs a few weeks old rotate an end and point out of the water. Here you can see a two-week old egg, upright, and the horizontal egg is the one collected from the compost. Both eggs have since been eaten. They were delicious.

(Look closely at the photo and you’ll see some of my egg cup collection!)