I’ve got a chicken road trip coming up. A couple of my girls are going to be on an Animal Planet program! I can’t give you details now, but what I can tell you is that they’re going to be used to show how easy it is to train any animal with thoughtful, consistent, positive reinforcement.

I need to bring two untrained hens, so Agnes and Philomena, the Golden Comets, will get their star turn. It’s a five hour drive, and they’ll be staying in a crate in a hotel room, and since it’s not easy to train stressed animals, I’ve been getting them acclimated to the crate, being confined, and new surroundings.

Meanwhile, I need to bring Coco, too. She’s my best traveling hen. Nothing fazes her and even people who are wary of chickens love her. However, as you know, she’s been broody. She’s been an unmovable, bad-tempered lump since the beginning of June. If she was sitting on fertile eggs, she could have hatched two clutches by now. So, two days ago, I put her in this wire-bottomed crate. 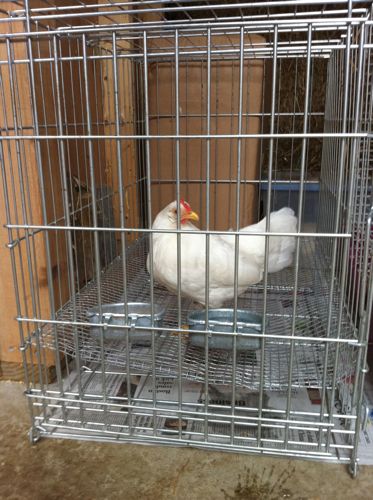 Coco is an unflappable hen (pun intended.) Even broody she doesn’t panic and throw herself at the wire door. She’s standing and walking around. I’ve been handling her and giving her special treats. The anti-broody crate is working a bit. However, I can tell that if she saw her nesting box, she’d turn into a lump again. So, she’s staying in the crate.

Meanwhile, I have much to do before leaving on Monday. The traveling crates need scrubbing. The three hens will get baths on Sunday. Then I’m going to give myself a manicure. Right before I leave. Think it will last?

It’s going to be an exhausting week. After the taping, I’ll drive five hours back home. Then, on Thursday I drive four plus hours down to NYC to pick up our oldest son from a pre-college program in Brooklyn. Two days later, we pick up our other son from boy scout camp in New Hampshire (note that it’s the exact opposite direction.) I can’t blog or respond to emails from the car, so don’t worry if you don’t hear from me until August!