Marge’s death was not expected. She was an older hen (hatched in October 2004) but she was loud, vigorous and looked healthy. Then, one day she walked with a bit of discomfort. The next she was gasping for breath, and a thin brown liquid poured out of her throat. Then she died.

I decided to to a postmortem, which was difficult for me, as this was a beloved chicken that I was cutting up. But I wanted to know something about what happened to her. I had taken a postmortem workshop at the Poultry Congress in January. Unfortunately, they only brought healthy birds – they rightly didn’t want to open up diseased chickens around all of the show birds. The birds we did the post-mortems on were mostly young cocks, so I didn’t get to see any interior eggs, either. But, I now know what a healthy bird looks like. Marge was not.

I don’t know what is normal for an older hen, but I am sure they should not have discolored fluid, egg whites and yolks in their body cavity, which is what I found. Chickens can become internal layers. Instead of the eggs making it down the proper tubes, they get misplaced. Usually, a hen reabsorbs the material, but, sometimes, it’s too much. It builds up and becomes infected. I believe that this happened to Marge.

There were other things that didn’t look right. An ovary should be the size of a walnut, with tiny orange yolks forming on it. Marge’s was the size of my hand, it was chalk-colored, dense and rubbery, and had some yellow yolks on it, but also some that looked like small, dark grey water balloons.

The best references I have for doing postmortems are two old books, Lippincott’s Farm Manuals:  Productive Poultry Husbandry (1921) and Poultry Sanitation and Disease Control (1939.) Both have illustrations of healthy and diseased birds (inside and out) and were written at a time when people kept chickens on pasture, and marketed older hens for the table. If you have a good resource for postmortems, please let me know.

I’ve a feeling that Petunia, Marge’s sister, also has an enlarged ovary, as she hasn’t been moving as spryly as she used to. Edwina and Eleanor are even older. I joke that they are going through henopause. They are retired, and once in a great long while lay an egg. They look fine, and appear to have a good life. Even Eleanor, who limps around (she’s been doing that for two years) takes sunbaths and has a hearty appetite and seems, well, just old. I’m hoping that they’ll all have a good summer. 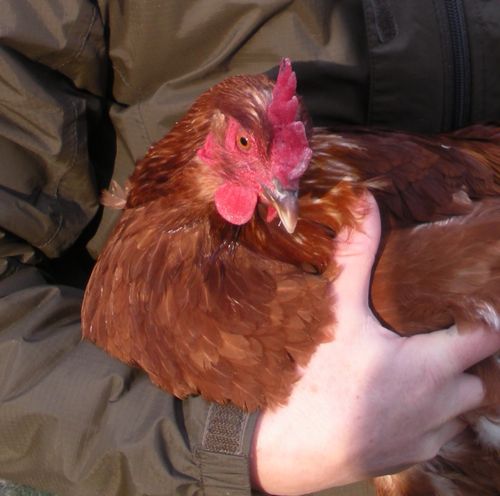