I was invited to bring some chickens to the Boston Museum of Science for a talk by writer Susan Orlean. She wrote an article about chickens for the New Yorker and so was asked to talk about her hens and her writing at a lecture. I brought the live props!

Around 5 PM, I popped Marge and Petunia into a large dog crate, Tina Turner and Siouxsie in another, and Coco in her guinea pig cage. Then I tucked them all into the minivan and off we went. Marge, of course, clucked and murmered the entire 45 minute drive to the museum. The chickens have never been on a wheely cart before, nor in a basement parking lot. Petunia stood up to get a good view. Cheryl White, from the Museum, is pushing one cart. I’ve got the other, and Steve helped with the doors. We had to take a freight elevator. Petunia found that interesting, too. Marge, of course, continued to make comments about her adventure. 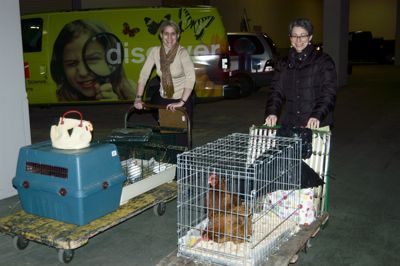 I brought tarps, X-pens, shavings, water dishes, and plenty of treats. I was sure that the girls would stay in the pens. I was wrong. It was their bedtime. Even though the lecture hall had bright lights and there were over a hundred people in the audience, and Susan was talking into a mic, it was still bedtime. They needed to roost. Tina and Siouxsie tried to balance on the narrow wire X-pen, but couldn’t do it. Every few minutes I had to pick them up and put them back in their pen. Finally, I held one girl and Steve held another while we sat in the audience. For awhile that worked, but they got restless. We put them back. Then Marge and Petunia decided that they really, really, absolutely had to roost. Here, Marge is checking out Coco’s digs. 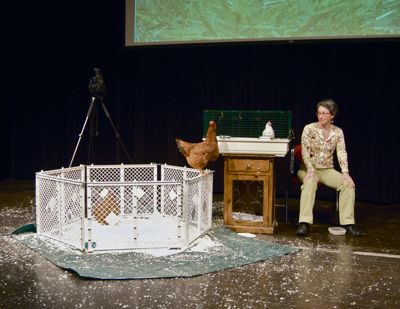 Petunia soon joined her on the edge of the X-pen, and both went to sleep.

I had no idea that chicken bedtimes were so written in stone. I was sure they went to sleep when it got dark. Now I know. The next time I do an evening program I’ll forgo all the treats, but bring roosts. I also know not to bother bringing shavings to put in the pens. What a mess.

Throughout all of this, Coco, my star traveling hen, stayed calm. She ate, she strutted, she relaxed. At the end of the program, I held her and a few dozen people pet her. She seemed to like the adulation.I let Susan Orlean hold her, and finally had to insist that Susan give her back.

This morning all of the girls were no worse the wear for all of the traveling. They were chipper and well. I even found a brown egg in the HenCam coop nesting box. Could all of this excitement have gotten Marge or Petunia to lay again?