All winter Marge has been quiet. Nary a cluck or a chuckle or a cackle. This is a hen who has created a constant racket ever since I got her as a chick. I’ve worried about her. She hatched October 6, 2004, which makes her almost six years old.

Today, though, I happened to be in the coop when Marge strutted through the pop door and announced her presence. Then, she continued to chuck-chuck as she checked out the nesting boxes. I am going to sit in one! she told me. She looked just like a hen that’s going to lay an egg. She was as loud as a hen who has laid an egg. She didn’t lay a thing, but I didn’t care. My Marge is back. 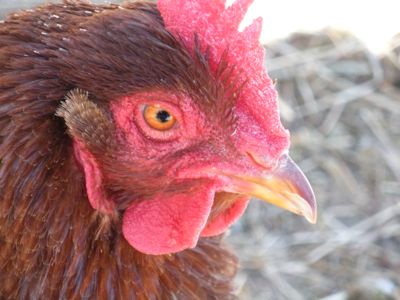