I’ve been keeping an eye on Eggers. Two days ago she was the last one out of the coop in the morning, which is most unlike her. Yesterday she was the first to go to bed. Sometimes it’s those subtle clues that let you know that an animal isn’t feeling well. But, with no other symptoms, I left her alone. 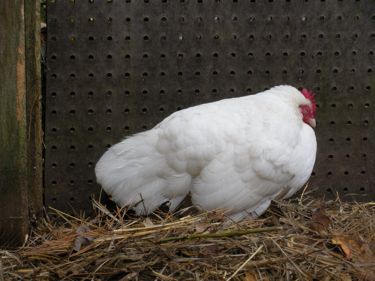 Eggers is on the compost pile, in the corner of the yard – the warmest, least windy spot. Her eyes are closed, her wings and tail droop. This is a sick bird.

It’s a cold, windy, damp day today. I immediately brought her inside the house. Warmth is the first thing that a sick hen needs. Next, I gave her a thorough inspection. Her vent area was messy and there was a spot of blood. This makes me think that she doesn’t just have a respiratory ailment, but that she has an internal problem. Besides, if she had a contagious cold, the other chickens would also be showing symptoms by now. Usually illness fells an entire flock.

I also looked for signs of external parasites. When a hen is sick, she can’t dust bathe, and so gets lice. It’s a clear indication that she hasn’t been well for awhile. Eggers was clean. That’s good. It means this ailment is new. Maybe I caught it in time.

The next step was to bathe Eggers using some antiseptic shampoo I have for my dog. I want her clean, so that if she does have a runny/bloody vent, I’ll be able to notice it immediately. But, a wet hen is really susceptible to illness and so she had to be dried. My hair is short and I don’t use a blow dryer. But I own one for situations like this. Eggers wanted to perch on my shoulder for the duration. 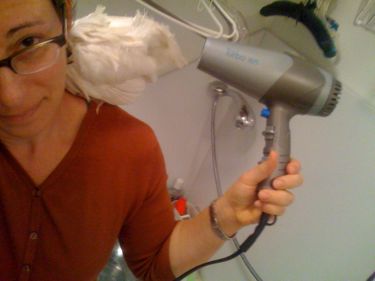 It takes a long time to blow dry a chicken. At one point she closed her eyes and napped.