The best day of the year in my little town is our July 4th celebration (scheduled on a weekend that’s not the 4th.) It’s called Old Home Day and has been happening here for about a century. It starts with early morning road races and ends with a chicken BBQ served by the firemen in the fire station. In between there’s a parade – no politicians allowed – but children  on bicycles are encouraged. Eleanor and Edwina had their own float! We put them in a wire dog crate, bungee-corded that to a kid’s wagon, and rolled them down the street. People LOVE seeing chickens. The girls were right behind an alpaca and a couple of mini-horses, but the oohs and ahhs for the chickens were the loudest.

There’s an art show, a dunking booth and a frog jumping contest. There’s a cake decorating contest. I entered this: 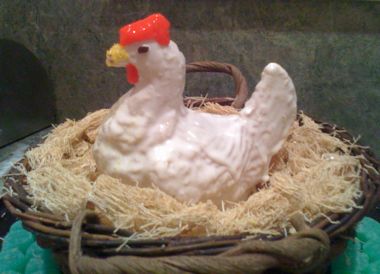 The nest is made from shredded wheat. Many people in town knew that it was my entry. The cakes are not returned. They are used as prizes for the cakewalk (think musical chairs, but if you win, you get a cake.) In our little town of only 5,000 people, about 100 donate cakes for this. Doesn’t that just make you smile?

This year my 10-year old son entered the Soap Box Derby for the first time. He and his Dad made a cart out of wheels and things left at our “transfer station” (glorified dump.) For this event, a road is closed off and the police get out their radar gun to gauge the speed of the carts. The police love Old Home Day.

Old Home Day is one of the reasons why this town doesn’t feel like a normal suburb. It really is a small community.