Japanese beetles are also called June Bugs, because that is when they appear. Although I saw a few last month, yesterday was when the beetles arrived en masse. I actually saw clumps of them just minutes after they emerged from their pupae. June bugs start out as eggs, then hatch into disgusting white grubs, destroy the roots of the lawn for a year, then turn into pupae, then become the beetles that eat up my garden.

I didn’t reach for the pesticides. I had something better. The LAWN PATROL. I carried my most voracious hen, Edwina, into the yard and plopped her next to a tangle of beetles. She ate them up. I let the other hens onto the lawn. It is amazing to see a chicken spy a bug and get it. A hen can see a tiny movement and snatch up the cause before I can even register what she is looking at.

There were swarms of beetles, hovering in the grass like honeybees on clover. I greatly enjoyed seeing Petunia, long neck stretched out, running after the flying bugs. Here is a photo of Twinkydink chasing June bugs: 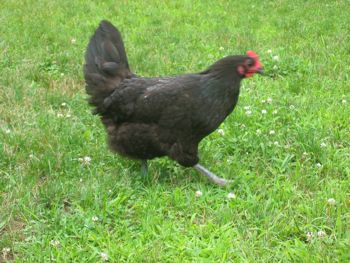 After about an hour (and I calculate the consumption of about 1,000 beetles) the girls took a well-deserved break. A communal dirt bath revived them. Soon after this photo was taken they were up and on patrol again. Good Girls! 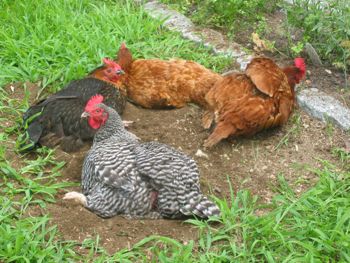