The two new hens have settled right into their new flock. Just as I thought, the Wyandottes became immediate pals. Alma is the golden-laced (who was previously in the HenCam barn) and Mazie is the silver-laced. Wyandottes are an old American breed. They have rose combs (contrast their bumpy low comb to the upright one on Snowball) and are winter hardy, good layers, and active but not aggressive. 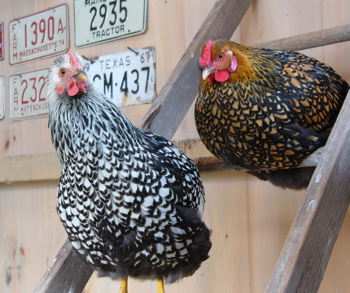 I’ve named the other new hen LuLu. She is a Sussex – the breed is named for where they were developed – Sussex, England. She has yet to find a best friend. But, not all chickens do. Buffy, at the bottom of the totem pole, is at the fringes of flock life. Snowball, is one of the top dogs (to mix metaphors), but she doesn’t care and goes about her life without interacting much with the other hens. It’s too early to see where LuLu will fit in. But, isn’t she simply stunning? Notice the creamy white legs (compare to the Wyandottes’ yellow shanks.) LuLu has just reached maturity. I can’t wait to see what her eggs look like. 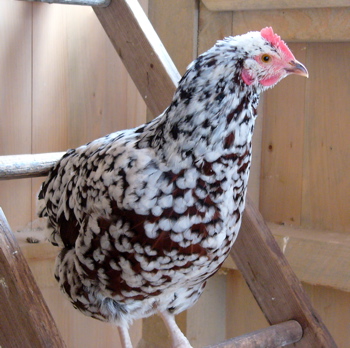