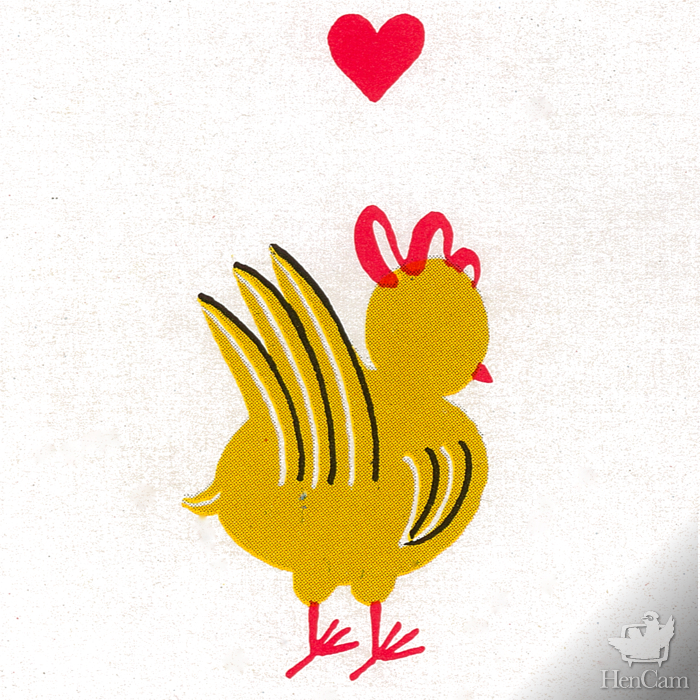 I found this sweet mid-century hen on the back of, of all things, a Christmas Card! I’ll share the rest of the card in another post.

Although Steve knew that there would be animals in our lives (moving in with him was contingent on getting a dog), chickens weren’t something that he thought about when we got married. Still, he wasn’t surprised when, sixteen years ago, I took in a neighbor’s lone hen. In any event, he liked the fluffy white Cochin. He didn’t mind the production red hen that I got her for company. For months, when I had a bed rest pregnancy, he took over the care of the chickens and found that he liked doing the barn chores. He got attached to the hens that I kept adding to the flock. But, being a nerd (said with the utmost respect) he had a different idea of how to enjoy them. “Let’s put a cam into the coop,” he said. “Who’d watch?” I asked. At the time the only internet cams were in universities (often pointed at vending machines so the scientists wouldn’t have to walk down a flight of stairs to see what was in stock.) “It’d be fun,” he said. “We don’t have electricity in the coop,” I replied. The idea was shelved.

The HenCam has become a full-time job and I need your help to grow my audience. Last night ITGuy added share buttons on the blog post pages to make it easier to let others know what you’ve found valuable here. He doesn’t do social media himself, so he’s not sure if he’s installed them properly. Let me know if there are glitches. 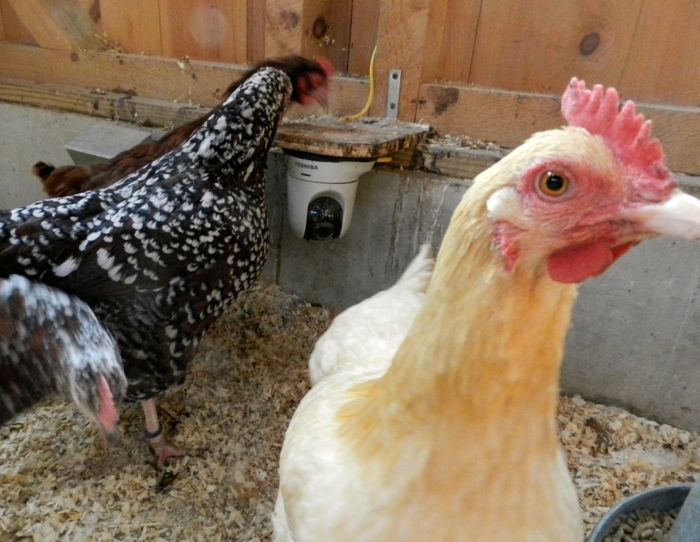 One of the benefits of keeping hens is that nothing goes to waste. In fact, kitchen disasters get a joyful reception from the flock.

I bought a new microwave. 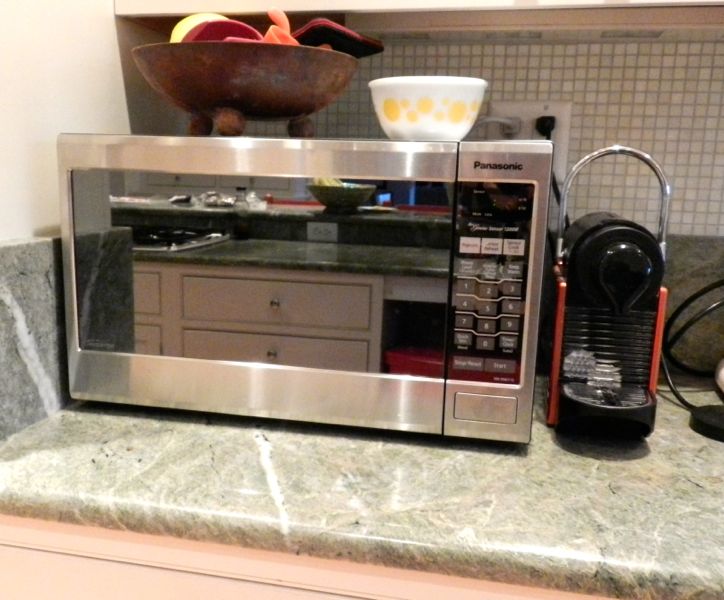 Same wattage as the 12-year old one, but more powerful, as I learned when the first batch of popcorn burnt. 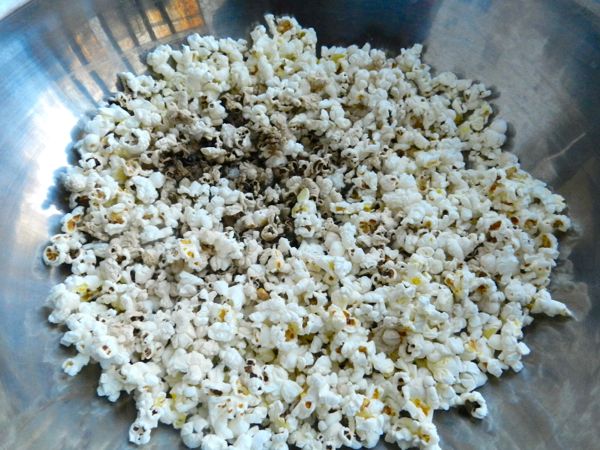 But, no matter! The Gems devoured it. No surprise that Beryl (she of the full crop) is photographed here being a glutton. 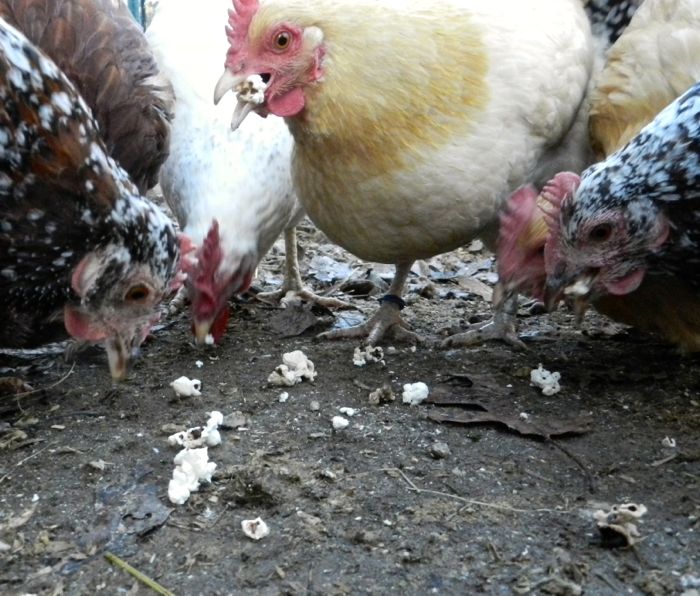 The goats leapt up onto their stumps in anticipation of the treat. 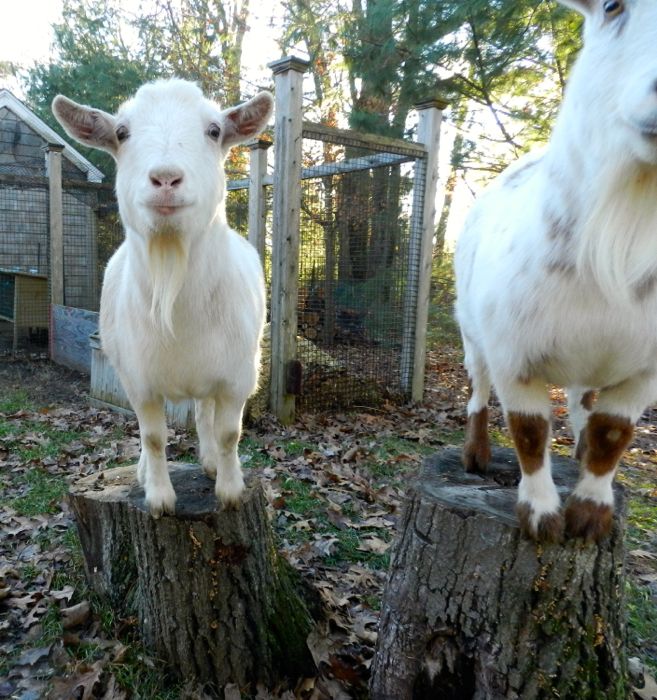 This is Caper’s popcorn face. He wants more. 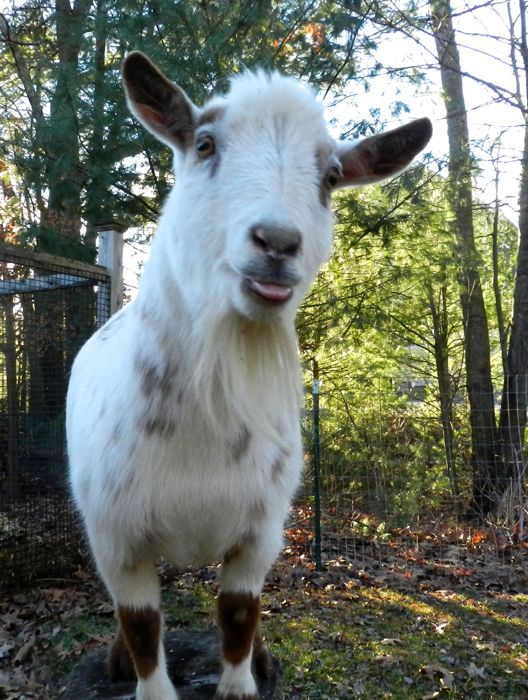 The old hens also enjoyed the popcorn, although they ate it in a more polite and sedate manner. 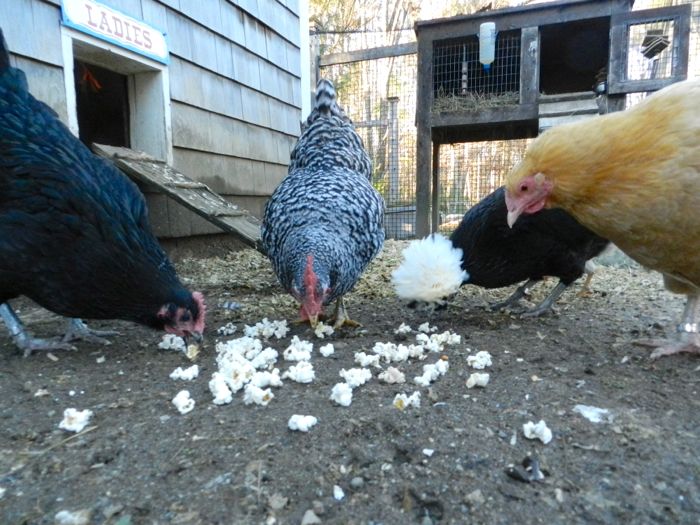 Only Candy was unimpressed. 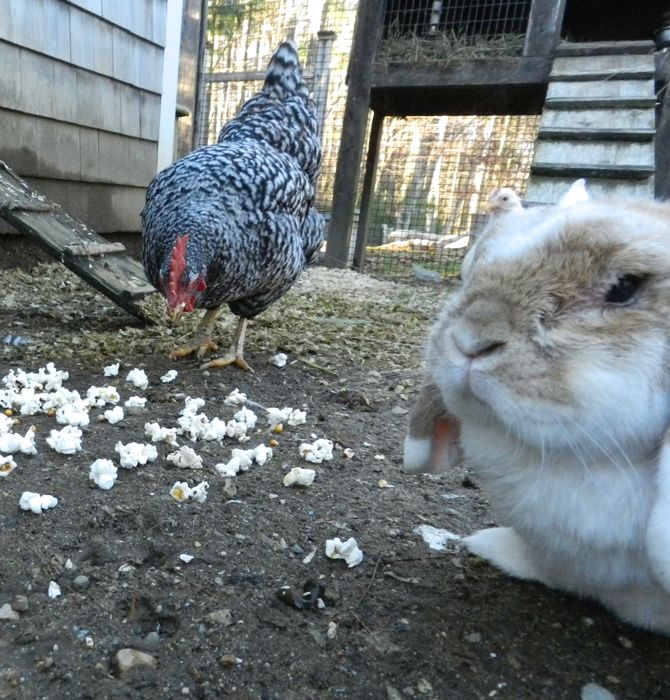 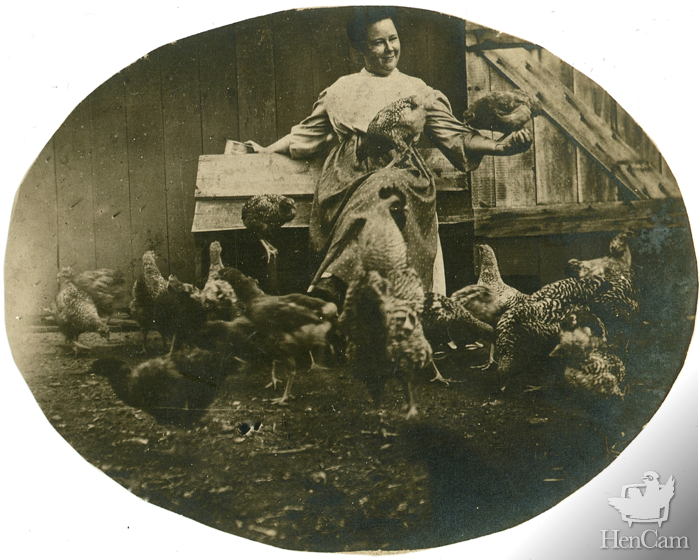 Is there anything more calming and cheering than a flock of inquisitive, chuckling hens? I think not. Even in these busiest of days, give yourself permission to sit for awhile with your feathered girlfriends. A moment with the chickens recharges my tolerance level so that I’m able to go grocery shopping and not go crazy when I hear yet another tinny rendition of “The Little Drummer Boy.” Whatever it is that you find annoying, it will be less so after a calming session with hens.

This fall, neither Tina nor Siouxsie had been looking hale and hearty. They each had their troubles. Tina’s bumblefoot didn’t appear to be bothering her, but she seemed less vibrant. For several weeks Siouxsie had been gasping and, when not in motion, standing hunched. But, both were eating and roosting, and milling about with the other chickens and the rabbit in their usual oblivious Polish-hens way. I thought that Siouxsie would be the first to die, but it was Tina. I found her on the floor of the coop one morning last week. She was breathing, but immobile. I tucked her into a nesting box, thinking that she would die soon, in peace in her home. The next day she was still breathing, still immobile. Chickens are renown for staying alive even when most of their bodily functions have stopped. They can survive even without their heads (hence the expression, running around like a chicken with its head chopped off.) At the end of the second day, Steve euthanized Tina (he does a quick break of the neck.)

I tell you these things because it is a part of chicken keeping. These are animals with short lives, and they die right in front of us. If you chose to raise hens for both eggs and meat, and harvest the hens before the age of two, then your chickens won’t suffer in old age, but will live vibrant lives until the end. It’s a humane and valid option. I chose to let my hens retire, knowing that there will be disease and death, but also knowing that some of my hens will live many years in retirement. Edwina, my Barred Rock, at 7, is as sturdy and content as ever.

I did a post-mortem on Tina. I’ve done ten of these home autopsies over the last few years. Although outward symptoms are often similar, what I find inside often surprises me. Tina had not starved (as ill hens sometimes do.) Her crop and gizzard were full, and she had meat and fat on her bones. She didn’t have cancer and, to my amateur eye, there were no signs of disease. What I did find was a heart as thin as a water balloon, filled with blood. I think that she died of heart failure.

I am honestly not sad that Tina died. Her laying days were over. She was a high-maintenance bird. The winter would have been hard on her, and work for me. She was funny to watch and tell stories about, but Tina wasn’t one of my favorites. Yes, I admit to having favorites and that I’m attached to some animals more than others. When you have a number of chickens, as I do, you expect the hens to come and go. You appreciate them while here but do not mourn their passing. A select few become dear to us. I cried when Lulu died. I did not cry over Tina. That’s okay. I am admitting that here in public so that you can be honest with yourselves at home. Not all hens become beloved pets. Not all chickens have to have long lives. What does matter is that they are cared for with thought and compassion. Tina had a good life and I’m glad that she was part of mine.

On my desk is a list of chicks I’ll be ordering this spring. 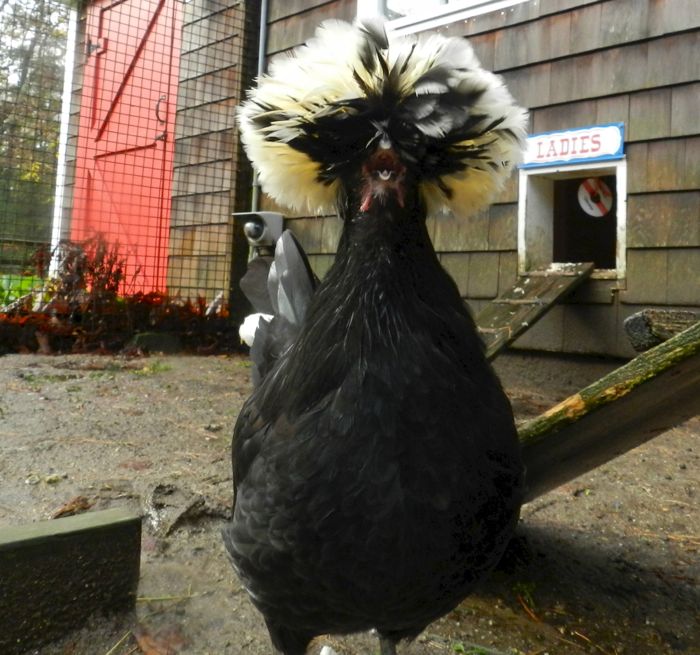