My bedroom window looks out into the backyard. When I woke this morning, delighted to see the sun (a brief respite before more snow and rain) I lucked out and saw Pip at the very moment that my husband opened his stall door to let him out. I think that Pip was as surprised to see the sun as I was. Instead of a inch of standing water on top of ice, there was bare ground underfoot. Pip leapt. He ran. He bounced. In short, he gamboled. I grinned. And I thought, how often does a person get to use the word gambol? It’s a good life when that’s the first thing one thinks of in the morning.

The goats are shedding. They have itches. If you scratch Pip between his forelegs he goes into a happy goat trance. See the smile? 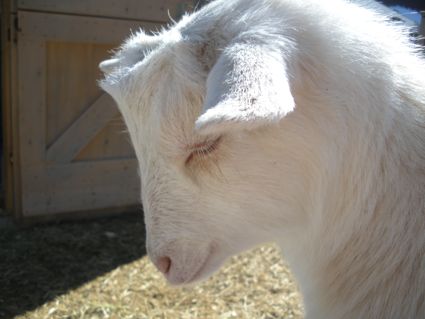 More than 150 people came out yesterday to the Westford Farmer’s Market Backyard Chicken Program. This is a good-sized crowd by any measure, but even more so considering that it was a gorgeous sunny above-freezing day, the sort of afternoon meant for walks and outdoor chores, not being cooped up in a church hall (pun unintended but noted.) But, there they were, people of all ages, interested in keeping poultry. 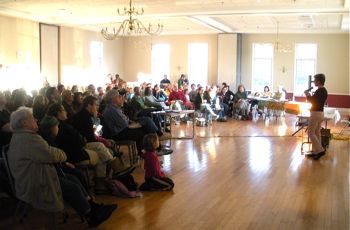 I’d be delighted to bring my presentation to your town. Email me at terry@terrygolson.com for details.

For the first two years of Petunia’s life she laid eggs all spring and summer, about 400 of them. In her third year, she laid an egg every couple of days. She’s now six and I don’t know how often she’ll produce eggs this year. Maybe none. I got Marge at the same time that I got Petunia. She’s still as noisy as ever, but also not laying.

Buffy is five years old. Two years ago she was quite ill. I nursed her back to health – it took months – she now looks fine, but hasn’t laid an egg since she got sick. 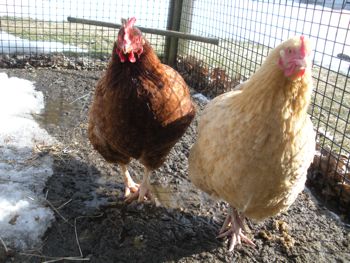 Eleanor is six years old, and she spends her days basking in sunbeams. Her sister, Edwina is more active, but probably not going to lay many eggs this summer. 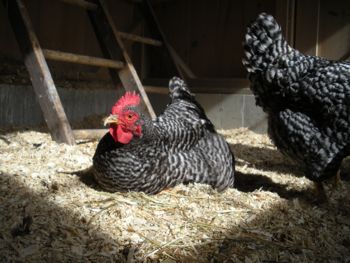 I’ve been thinking about my old hens, and it’s dawned on me that these are the first elderly chickens I’ve ever had. I don’t cull for productivity, and if a hen gets sick, I try to save her (even though it doesn’t make economic sense.) This morning, I went back through my records. I even made a chart to make sense of what has happened to my hens. I’ve had chickens since 1996. I’ve  lost chickens to a vicious raccoon attack, to hawks and to disease. I was surprised to see that Eleanor and Edwina, Petunia and Marge are the most long-lived hens that I’ve ever had.

I like that I can recognize Marge’s buk-buk-clucking. I like seeing Eleanor laze about, her beady eye cocked up at me, clearly saying, I’m here and I’m not moving. So there. I like seeing how Buffy puts up with Lulu’s attempts at friendship. I know these hens. The chickens give me more than eggs. There’s something inexplicably satisfying about standing in the coop, early on a cold morning, tossing corn to the girls. They talk to me. I talk back. They go about their busy chicken day. I go back inside to mine, having gotten to a good start with the community in the coop.

Siouxsie is a Polish Crested. They’re rather silly, fancy birds. You don’t get this breed if you care about high egg production. They’re in the flock for the amusement value. 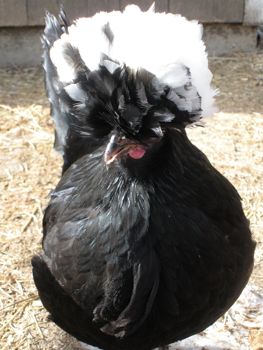 Nevertheless, the Polish Crested do lay eggs. Siouxsie is about 8 months old. She just laid her first egg. First eggs are often a tad irregular. I’ve seen miniscule eggs without yolks, and jumbo eggs with two yolks. Siouxsie’s first egg was pointy at both ends. 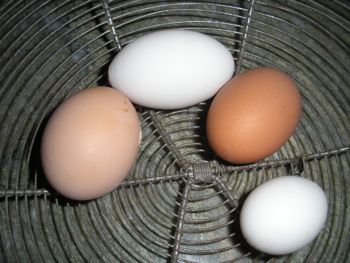 It’s so long that the carton can’t close. I imagine the other eggs were as amused as I was. 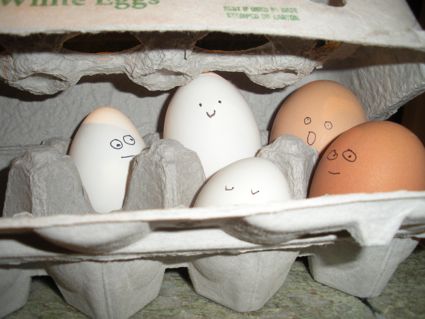