When I brought Lily home, she was somewhere shy of six months of age. Like so many dogs now in New England, she was brought up from the South where spay and neuter programs aren’t as prevalent. I found her online, from a “border collie rescue” – but it was more like one good-hearted person channeling dogs to new homes.

Here she is on the day that I met her. 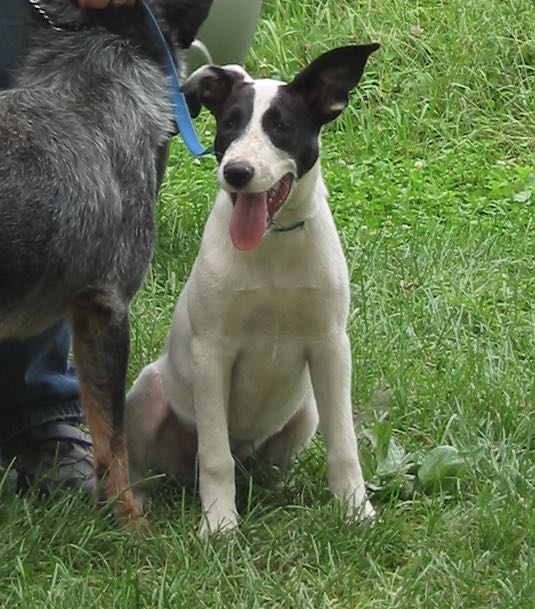 Yes, she was black and white, but she wan’t a border collie. I was told that she was good with dogs and people. It became clear early on that that description wasn’t accurate either. In fact, Lily missed the crucial socializing window. Despite much work by both of us, Lily has never learned how to read other dogs’ body language, and so becomes fearful and thus can be suddenly aggressive. Lily is also reactive to movement, and I’m pretty sure that in her early days she hunted in order to feed herself. This made it difficult to integrate her into my family, which at the time had two young boys who, like all children, ran and made sudden noises. To keep everyone safe, and simply to make life easier, Lily and I attended puppy classes. More control classes. Beginning agility classes. I had a private trainer come and help.

It took time and attention but Lily did become a much loved member of the family. However simply being a pet was not in her nature. She had work to do. Ever vigilant, Lily has spent the last dozen years keeping all squirrels off of our property. Chipmunks, too. 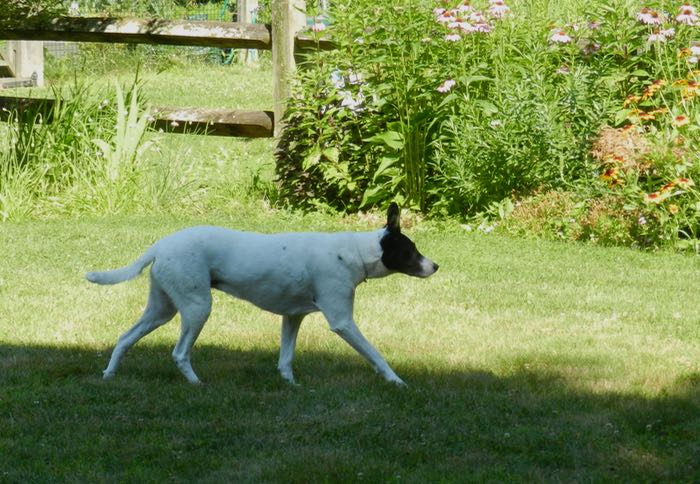 Lily excels as a farm dog. In thirteen years we haven’t had a single predator attack on our hens. Then again, I can’t put her out with the Girls. That reactivity to movement is still there and if a chicken were to flap too quickly past her, well, it’d be snatched up before Lily could think. Lily has managed over the years to make a few dog friends, but on the whole, she keeps them at bay. This is not a bad thing. She’s done a good job of keeping a neighboring Portuguese Water Dog out of the koi pond, a loose labrador from harassing the goats, and various wandering dogs off of the premises.

Five years in, her job kept her busy, and she was my constant shadow, but I thought she’d be happier with another dog in the house. Nine years ago we got Scooter. It was the right thing to do. He’s Robin to her Batman. (Here they are soon after he arrived. It took some doing to teach Lily that Scooter was not a chipmunk!) 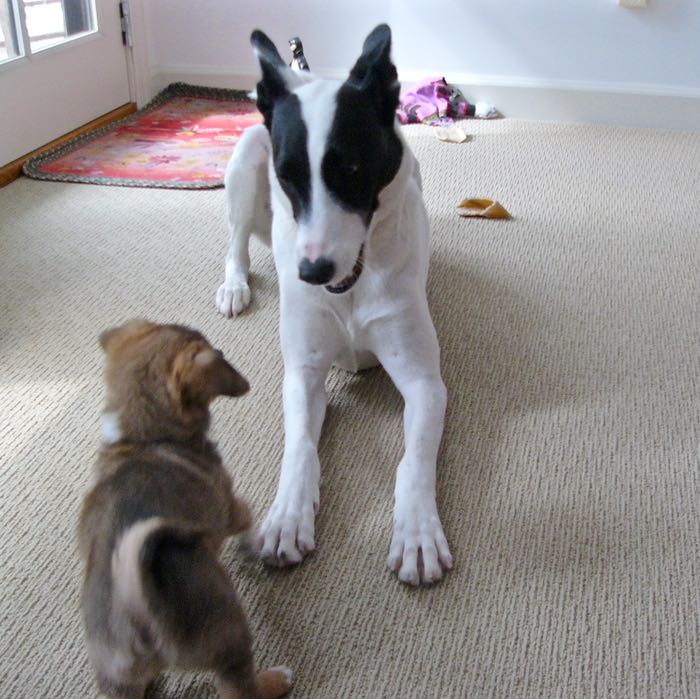 In her heyday, Lily was astoundingly agile, fast and athletic. 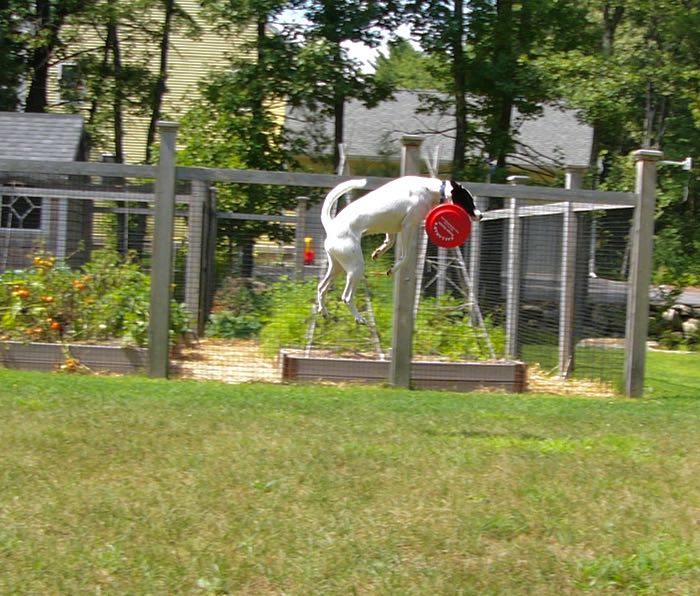 Thirteen is old for a dog, especially one of Lily’s size (50 pounds). She’s slowed down. She sleeps a lot. 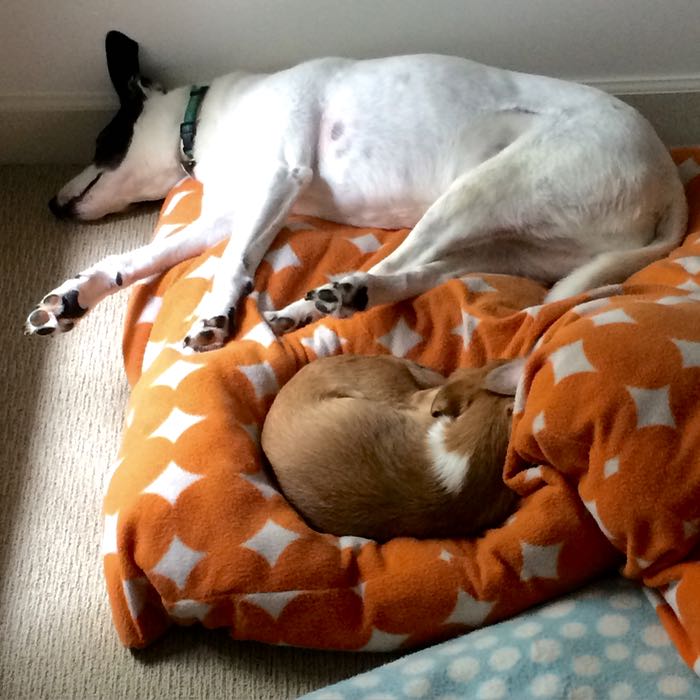 Her face has grayed. 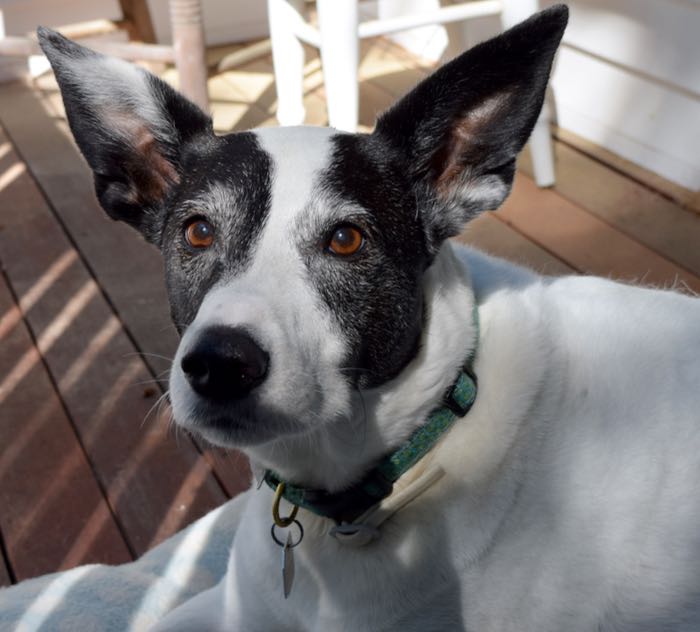 But she tells me that she’s still on the job. 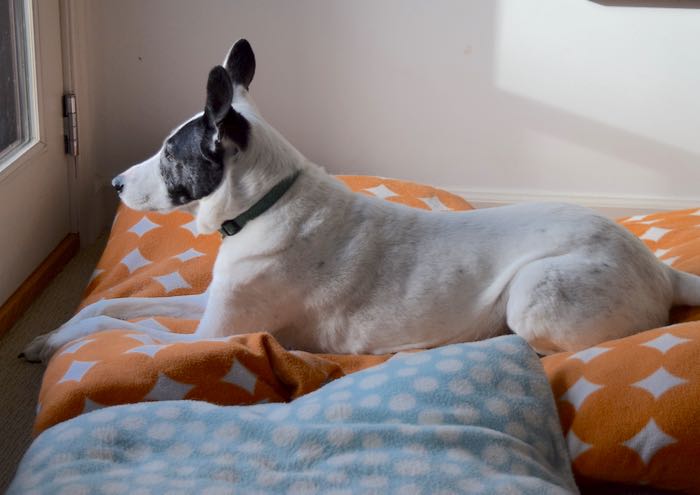 Last year Lily tore her cruciate ligament and went severely, painfully lame. We decided not to do surgery – it would have been too hard on this old dog who can’t bear to be confined. Miraculously, Lily has recovered. She’s gimpy, but yesterday, in the spring breezes, she had zoomies out in the yard, and made a point of smiling at me as she sailed past. 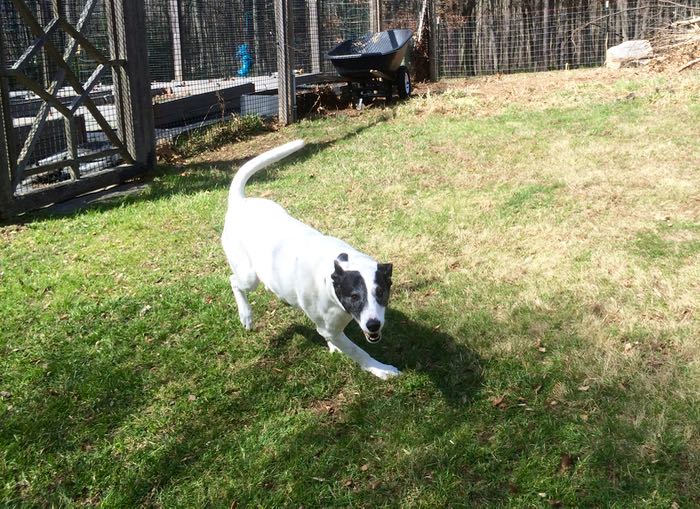 Lily is starting to have senior moments. She gets up, looks confused, and lays back down again. Her hearing isn’t acute like it used to be. She no longer hears my car as it turns into the driveway. She doesn’t even hear the garage door. She no longer greets me at the kitchen door. Every time I come home and she’s not there, it is a poignant moment for me. Lily is an old dog.

But Lily’s essence remains intact. She still lets me know when those dogs are walking down the street. Thank you, Lily, and a very Happy Birthday to you! 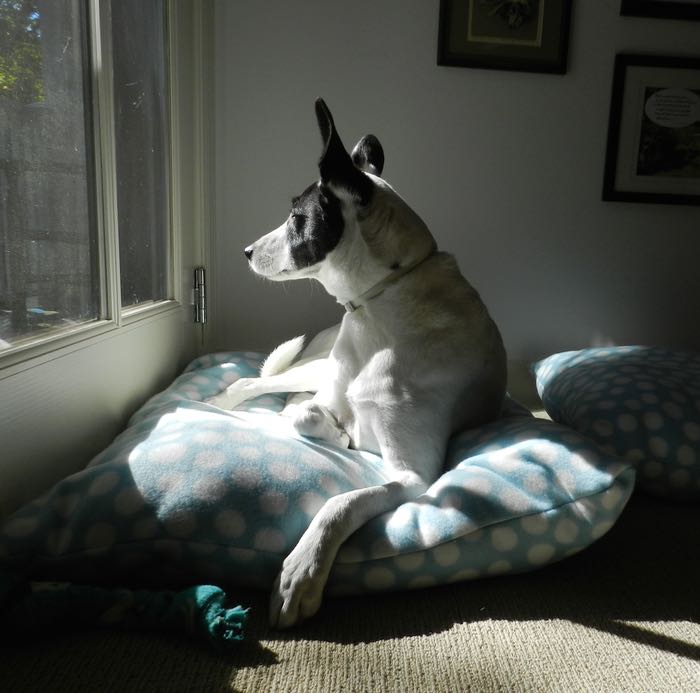