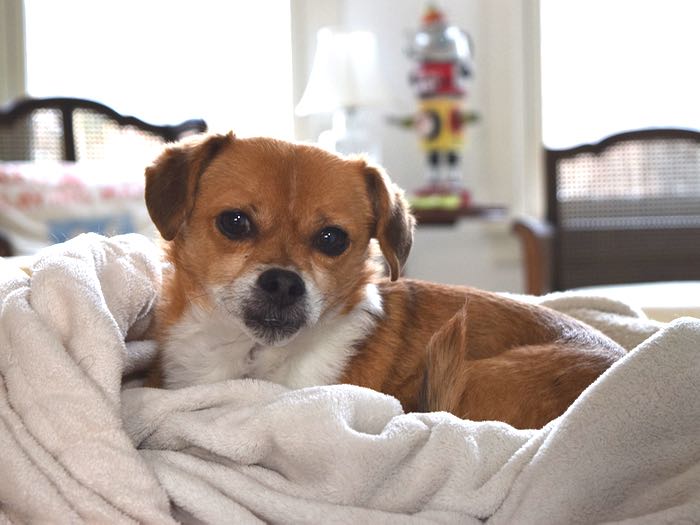 He was not what I wanted. I’m not a toy dog person. I like my dogs mid-sized, active, smart, and focused. Working dogs. I was looking for a corgi mix. Maybe a terrier. A smallish dog that would keep Lily busy. Lily has always been a difficult dog to live with. She’s all of those things that I described above, but also an alarmist and very serious about staying alert. Her job is to keep the animals in the backyard safe. Unfortunately, the biggest threat to the chickens and goats are loose dogs in the neighborhood, so Lily became reactive and she didn’t have any doggy friends. One known dog companion in the house was what she needed.

I brought Scooter home. He was 10 weeks old and not even four pounds. It took awhile to train Lily that Scooter was not a chipmunk.

It took awhile for me to realize that this puppy wasn’t going to be as large as his mother (20 pounds) but would top off at under 11, and that there was no terrier or working dog in him. But, the Rolling Stones had it right: You can’t always get what you want, but if you try sometime, you just might find that you get what you need.

The dogs that my sons grew up with had always been my dogs. They weren’t cuddlers. Scooter immediately filled in the job position that called for sitting on the couch, curled up next to a child.

Lily worried all day. Scooter filled in the job position of creating fun distraction. Soon, the dogs were doing the zoomies together (watch this video.) Afterwards, Lily was satisfied and relaxed.

Scooter got as attached to Lily as she was to him. When I took her on hikes and left him at home, he howled. Now that Lily has a cruciate tear, we no longer go on hard treks that Scooter can’t keep up with, and so they are always together. No more howling.

I needed a dog to go through the KPA course with. Lily couldn’t do it because of her reactivity and because she was already clicker trained. The job fell to Scooter, who I affectionately call the “dog of little brain.” Several times we had to go to a training facility, where there were scary smells and sounds and strange dogs. He was miserable traveling without Lily, but he did what he had to. In order to graduate, I had to teach him a 10-part behavior chain. Here we are practicing. (The final chain is more precise. For example, we finessed it so that he touched the ruler with his right paw.) Thanks to Scooter, I passed.

Lily is still the alert dog, and Scooter is the master of naps. Lily knows that Scooter sometimes needs the entire bed. That’s okay. That’s what best friends do. 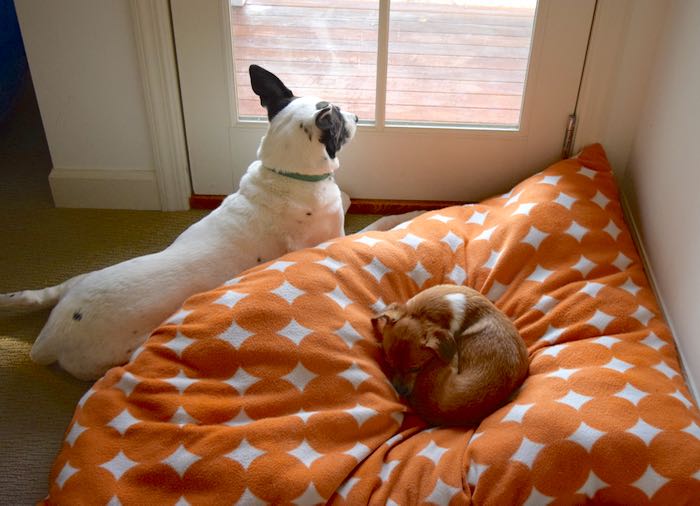