Longtime readers of my blog know that I believe that the foundation of good care for one’s flock is to know them, and you do this by observation. It’s true of horses, too. Before the training, before the riding, you need to know each other.

I have two clients, a married couple, who each own a Lusitano gelding. One is a skilled rider, the other is a novice; both are realistic about their limited experience in horse care. They’re also extremely busy professionals. I was called in to find them a better boarding situation, and then to do a baseline observation of their horses’ behavior and body conditions. I keep tabs on the horses’ progress. When the owners travel, I do well horse checkups and pamper the horses with grooming sessions and walks.

This is what “G” (name initialized to protect his privacy) was like when we first met. He has a lovely intelligent eye. 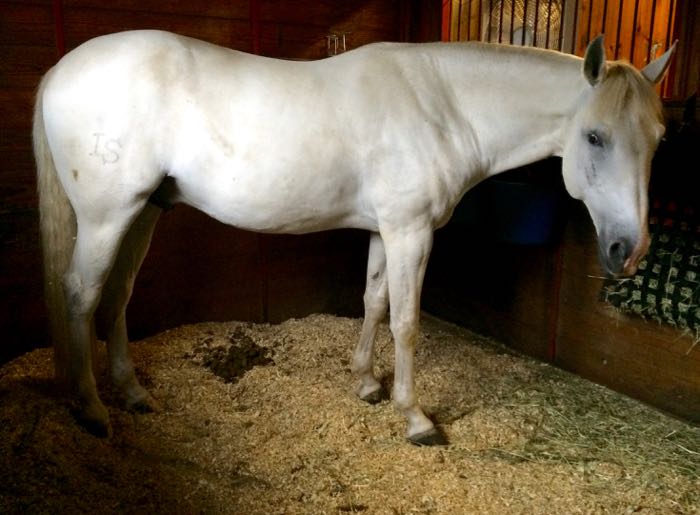 “S” has a more wary and nervous temperament. He’s also an elderly horse, who has been used hard in his past. This photo captures what he was like when I first met him. 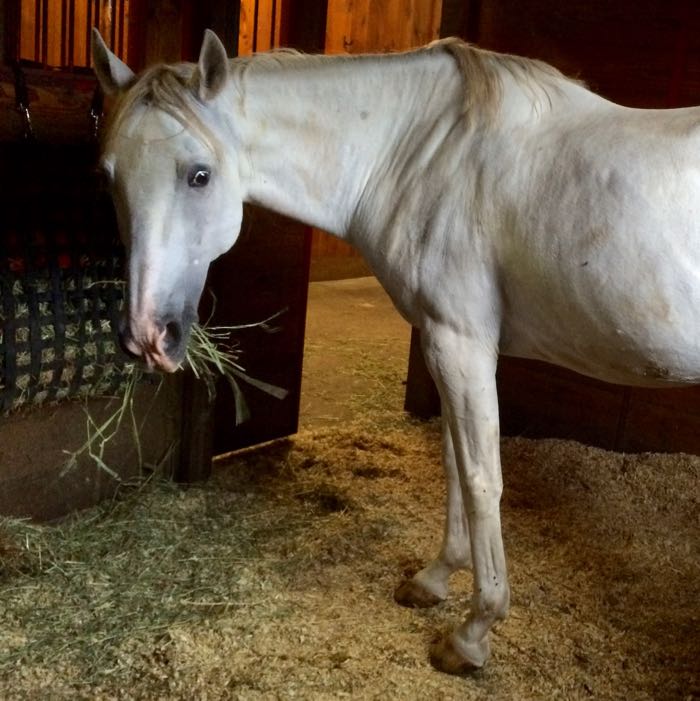 and a protein additive for his feed. I bathed him and stood quietly with him. I doctored some mysterious sores on the outsides of his legs. 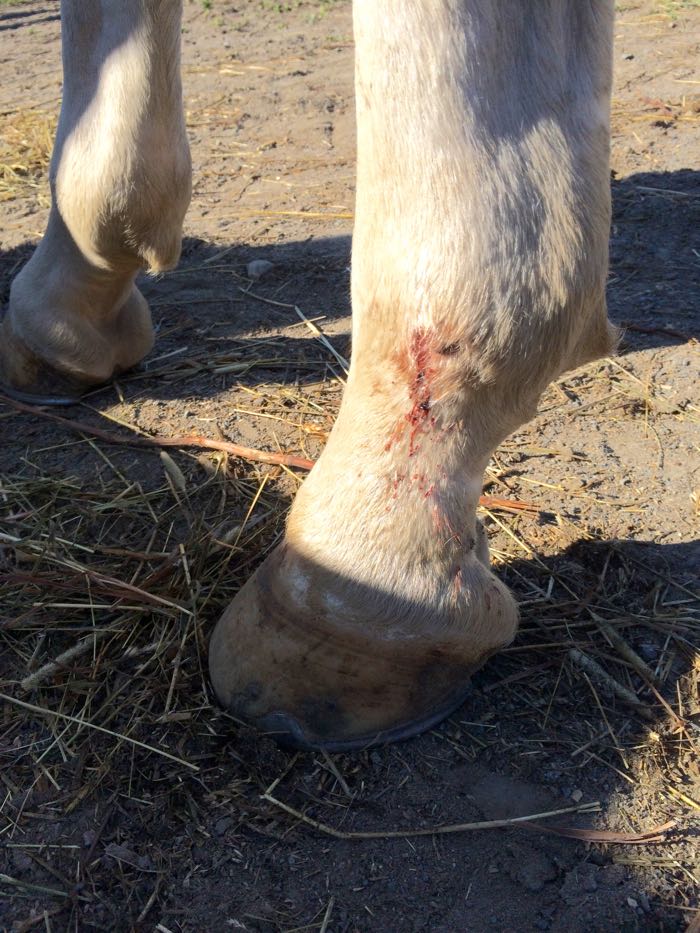 The wounds weren’t a one-time occurrence. He continued to open up the scabs and get new ones. How was he injuring himself? I had to do some sleuthing, which, of course, involved quiet observation.

Half of the day, the horses are in dirt paddocks. The other half they are turned out into grassy fields. I walked through both areas. There was nothing dangerous in them. The area that S likes to dust bathe in is sand, and there aren’t any obvious rocks to rub him raw.

These sores appeared in mid-summer when the grass inside of the fence was eaten down so far that there was nothing left to nibble. But, on the outside was glorious, tall green growth. The fence line’s bottom rails of S’s enclosures were rather high in places. High enough for a determined horse to reach under.

G, in the lefthand paddock couldn’t reach the grass. You can see how high it is by his fence. But S has those high rails, and he’s willing to get down. He was doing the limbo, and in the process was rubbing himself raw. No matter that both horses have slow feed hay boxes, S wanted that grass! 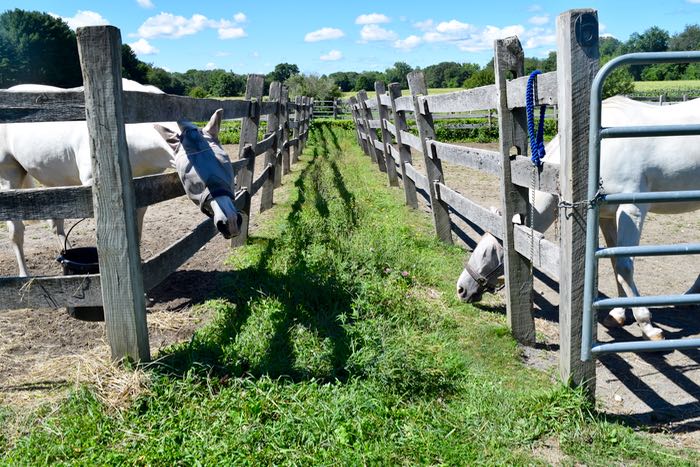 I’m 99% sure that this is how S got those sores. I didn’t catch him in the act, although I did see him in a stretch that looked like a bow. Look at how far over the grass is eaten down. There’s no way that he can reach that by just stretching his neck. In pushing himself back up, he would have rubbed the outsides of his legs. The horse that alternates turnout in these paddocks also has sores in exactly the same places, though not quite as raw. S has very sensitive skin. 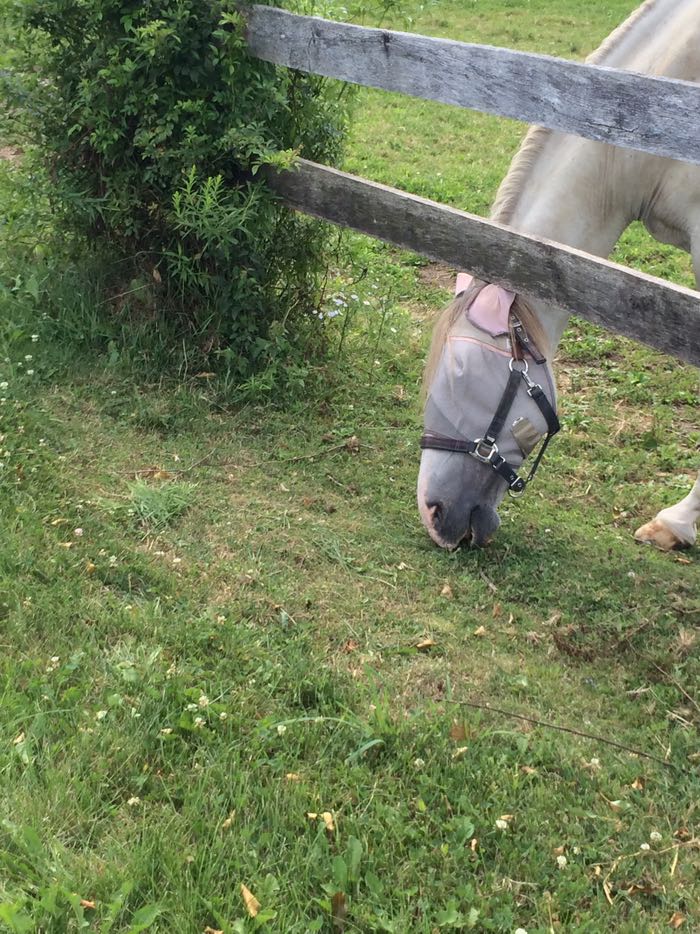 I talked to the farm manager about this. The fence line has been mowed. The sores are healing.

S and I have gotten to know each other. Look at his expression now. 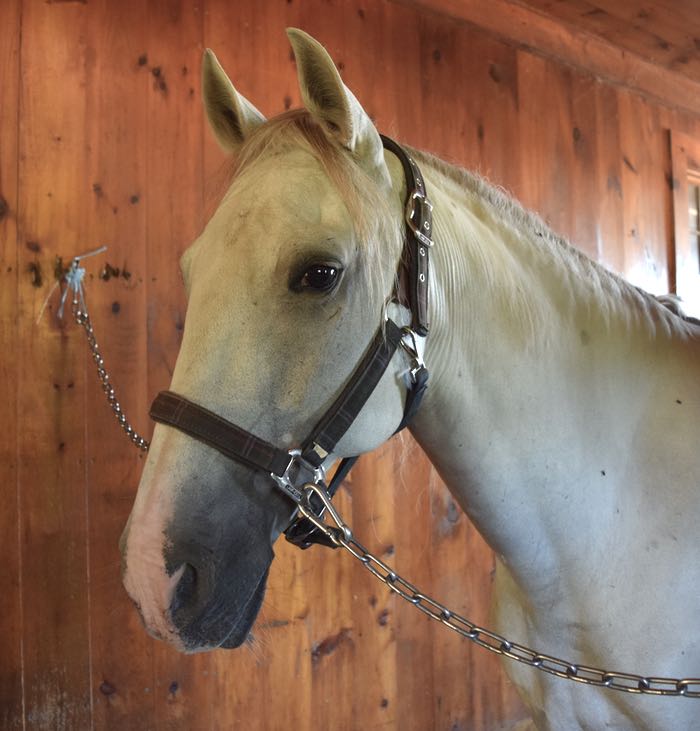 If you need horse behavior sleuthing, email me. I’m also available to do well horse checks, and grooming sessions for bonding and health. (I’m based 30 miles west of Boston, MA) Contact me, too, if you’d like to learn how to handle and groom your horse so that she gives you that soft, welcoming eye. There’s nothing like having a gleaming, healthy horse give you that look.