We weave all sorts of stories for why our animals do what they do. I left the house for a day and my cat was mad at me so peed on the bed and the dog knows to come but is blowing me off or the horse slams me into the wall because he has no respect for authority. Most of those stories are wrong. I don’t say that because I discount that animals have feelings. I do believe that animals are cognizant beings with emotional lives. But, when people talk about their pets, they often see them through their own skewed lens of being human.

I tell stories about my animals, too, and I don’t hesitate to use words like happy, clever and confused when talking about them. But, I like to think that at the base of my tales are truths about the who these animals truly are, not my own needs and emotions painted over them. To understand another, an other, one must pay close attention. I’m trained to do analyses of behavior. I start by noting all interactions and body language. I don’t assume that I know what is going on. I look for details and nuances. For example, a dog doesn’t just wag her tail. The tail might be held high, or low, it might be swinging fast, or slow, the hairs might be erect or flat. Those details give essential information.

We live in close contact with our dogs, and opportunities to observe them abound. Horses are more of a challenge. Tonka is boarded at a barn 20 miles from my home. Although I drive there daily, and stay a couple of hours, it’s still a limited block of time. When I arrive, I bring him in from a paddock, groom him, tack up and ride, then clean him off. I try to make time to hand-graze. I try not to rush, but our interactions are all within the context of me deciding what happens. It doesn’t allow for getting to know who he is on his own terms. Or for problem-solving situations that come up. For that, I need to step back and watch.

Tonka spends his days in a fenced area with Maggie. They get along okay. Horses who are best friends do mutual grooming, stand head to tail swishing flies off of each other, and eat together. Maggie and Tonka do none of those things. But, they greet each other with affectionate nose snorts and peaceably spend their days in the paddock. Mostly. Although there are two slow feed hay nets, I’ve noticed that when I arrive at the stable, I often see Tonka several feet from Maggie, while she polishes the last of the hay out of one of the nets. When there’s hay in both nets, I’ve seen her leave hers, threaten Tonka with pinned ears and move him away from his food. I’ve been concerned that Maggie isn’t letting Tonka eat all of his hay. (They get 2 flakes each in the morning, and another flake at noon. Later in the day, they get two more feedings when in their stalls.) Maggie was doing what is often seen in groups of animals in a confined space, she was resource guarding. In a more natural setting, the horses would be surrounded by acres of grass. One horse couldn’t claim all of the food, and so she wouldn’t even try. So, although Maggie was pinning her ears and showing her teeth to Tonka, I wouldn’t use the term aggressive, nor even the word mean,  nor greedy.  Those are all words with negative connotations, and once said usually instigate some sort of retaliation or punishment. Maggie was simply trying to keep all of the food for herself. Despite the fact that I didn’t use negative labels on Maggie, I did make assumptions. When I saw Tonka standing with his head lowered, facing Maggie twenty feet away while she ate, I assumed that my horse was dejected and hungry. But, I knew that my assumptions could be wrong, so, I decided to take the time to watch.

I arrived right at lunchtime when the horses were each given a flake of hay in  their respective nets. I sat down in the shade with a notebook and pen, and a timer. I recorded who ate, when and where, I recorded body language. (Were the ears pinned flat, or at an angle? Was he facing her, or was his back turned? Was a hoof cocked?)

I watched for an hour and a half. My assumptions were mostly wrong.

The two horses started out eating, each at their own net. Within five minutes, Maggie walked over to Tonka’s net. All it took from her were her ears pinned flat back and an outstretched neck. Tonka had seen that body language before, and he walked away. He stood quietly for about 5 minutes and I started to worry. Was he so fearful of Maggie that he wasn’t eating? But then at the seven minute mark, he calmly walked  over to the net that she had left. She didn’t even flick an ear in his direction. She didn’t move him away from the net. All was peaceful. They ate. And ate. After 50 minutes, Tonka moved off and stood in the shade. He was done eating. A third of his hay ration remained in the net. Maggie continued to eat. Tonka had a drink. He went back to nap in the shade. Maggie continued to eat. Once she finished at her net, she went over to finish what Tonka had left. So, it wasn’t that she was preventing him from eating! In this case, it was simply that Tonka had eaten his fill. All of those afternoons, when I’d arrived at the barn and seen only Maggie eating and not Tonka, I’d seen the end of the story. My assumptions were wrong.

What was also clear from my observations was that Maggie was eating a tad too much hay and that Tonka required more time to eat his. The solution is to continue to feed as we do outside. However, inside, Maggie’s rations are being reduced. Tonk’s might be increased. I’m keeping an eye on his weight.

Stories can change. How animals behave isn’t set in stone, Rather, it’s like that game of pick-up-sticks. Upset one stick in the pile and everything changes. Recently, Tonka and Maggie were moved to the paddock to the left. Same rocky New England dirt. Same feed. Same hay nets. And yet, in this paddock Maggie was truly not letting Tonka eat. I put some hay in each feeder so that I could document the dynamics.

Tonka waited for Maggie to pick which hay net was hers before he walked over to the other to start eating. 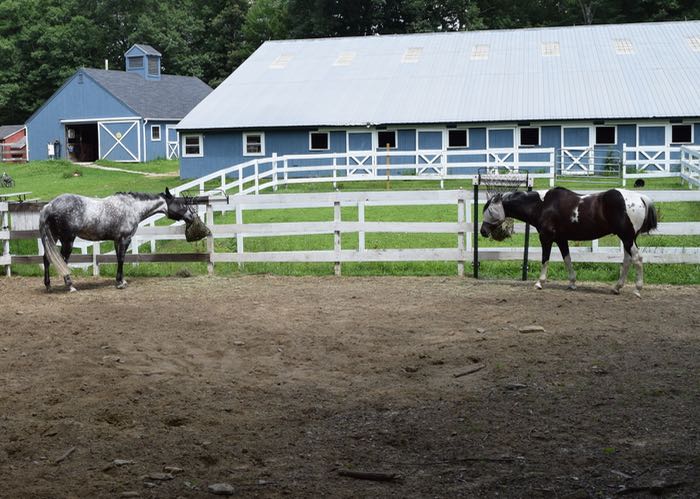 Maggie decided that she would rather have Tonka’s hay, and moved him off with a bit of body language. 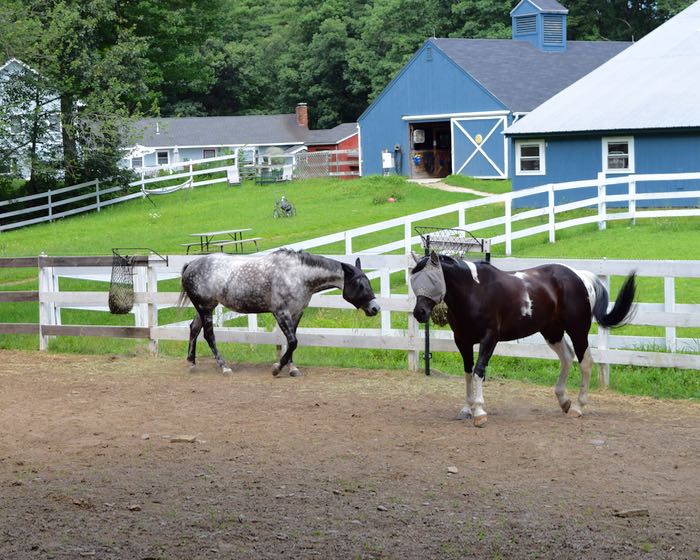 I was in the paddock taking the photos, and that changed the interactions a tad. Tonka looked over at me with a Did you see that? expression. I told him to go eat his hay, so he headed back down to the feeders. 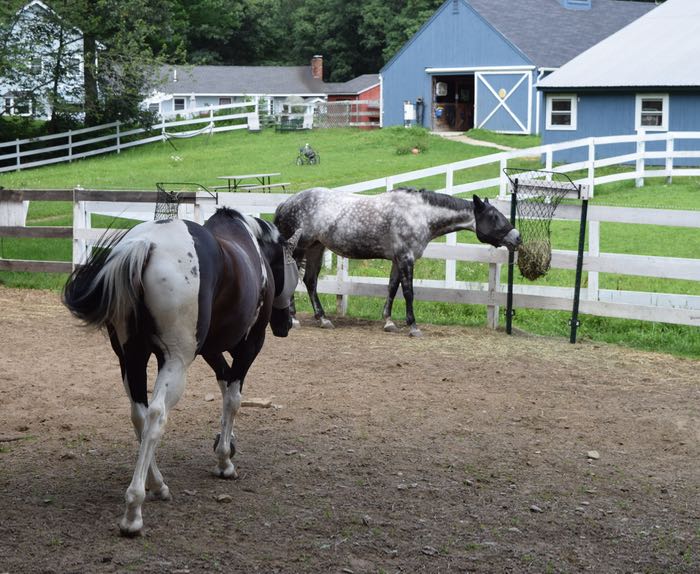 Note that Maggie is eating stretched out at one net, and has her rear facing the other. All the better to claim both nets. Which she does. When Tonka arrived at the net on the left, Maggie swung around and threatened Tonka with teeth, then wheeled and showed off the kicking half. 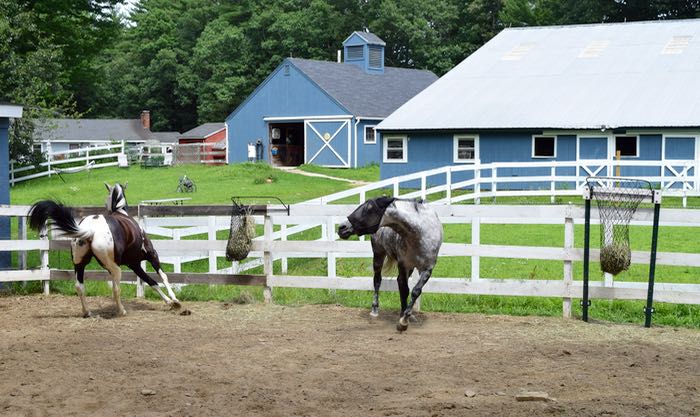 You can see Tonka’s breeding here – daddy was an agile roping horse! As soon as he is safely out of her reach, Tonka walks in a relaxed way, back to me, once again saying, Did you see that? 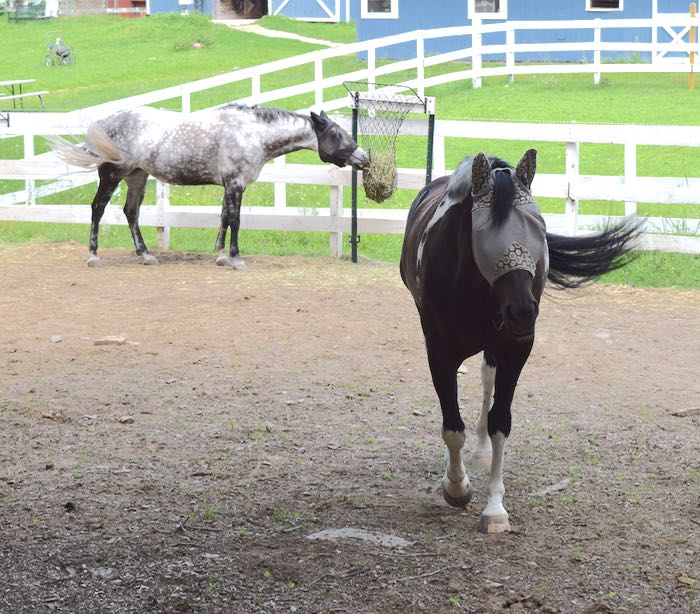 I told him that I did and to go eat his hay. He tries once more, but he can’t get near either feeder. 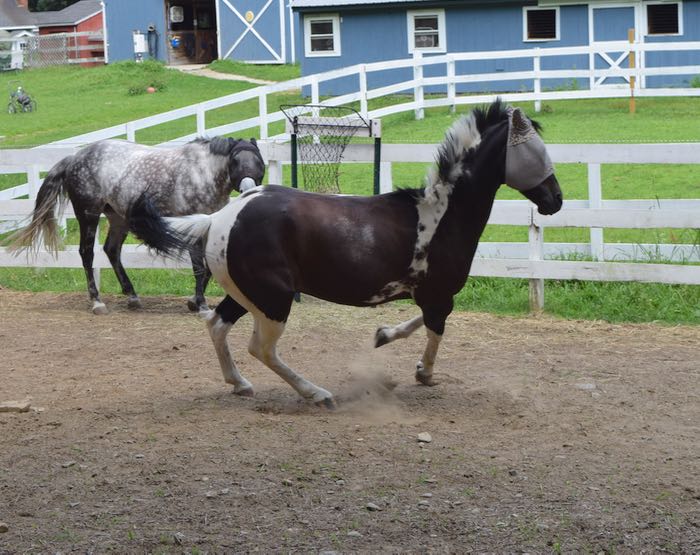 So I gave him a pile of hay far away from Maggie. 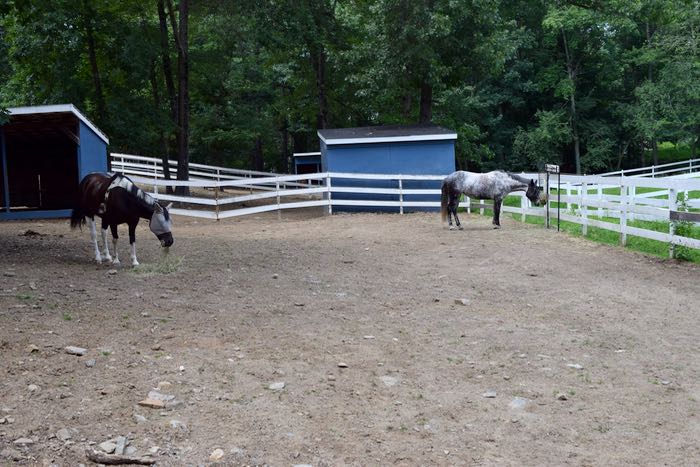 She decided she’d rather eat off of the ground. 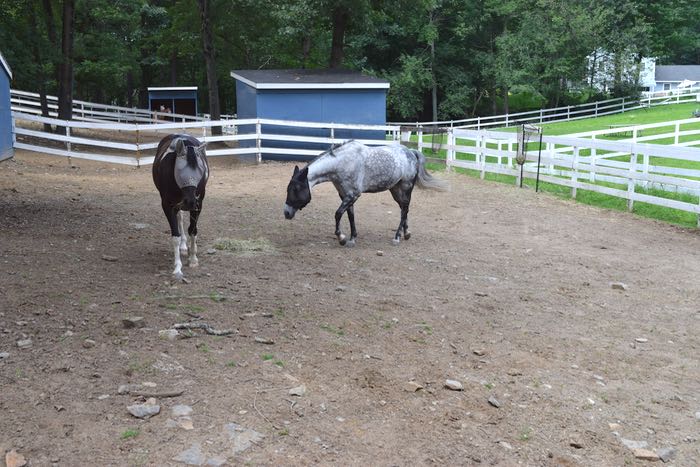 Tonka went back to the hay net. 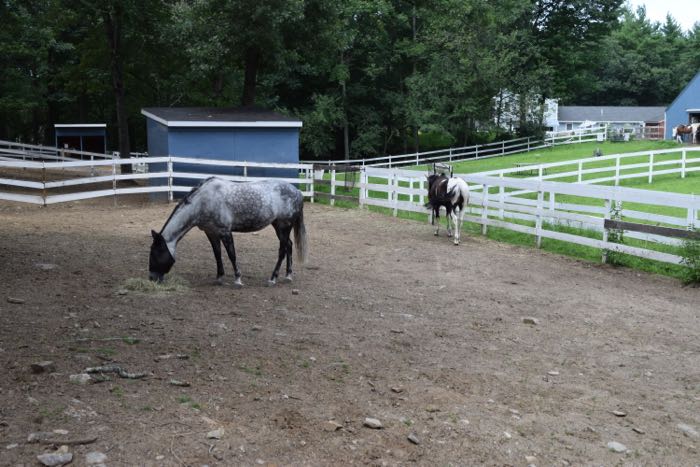 But not for long. Maggie was persistent about claiming whatever hay that Tonka had. 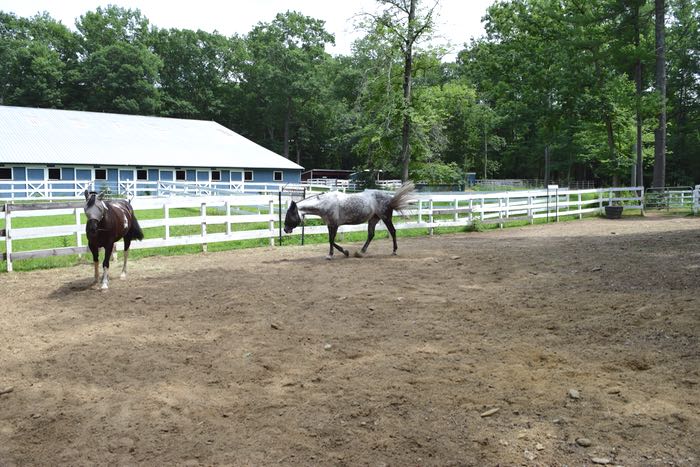 This went on for fifteen minutes. At last, Tonk was allowed to finish the pile on the ground. Perhaps Maggie finally got hungry enough to stand in one place. Or perhaps she left him alone because I was standing closer to Tonka. I’ve got some well-understood body language, too! 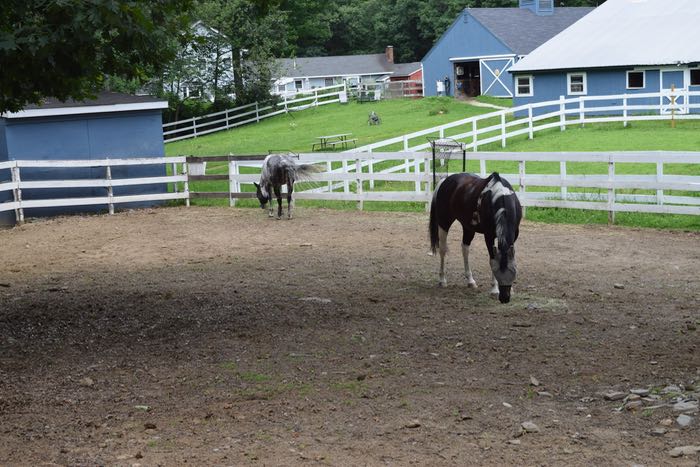 Despite this drama, I wouldn’t label Maggie as bossy or mean. In a paddock where there’s no grass, a pile of hay is a resource to be guarded. At least this is true in her mind. Other horses at the farm share hay nets with their friends. Maggie does not. Behavior like this is often determined early in a horse’s life. Possibly at weaning, or even before. If Maggie ever experienced a limited food supply, she would carry that memory with her.

I don’t like seeing Tonka pushed around. However, there has never been any physical contact between the two horses. Tonka has never had a bump or scratch on him from Maggie. He’s very good at reading body language and moving out of the way. And moving around isn’t all that bad. Horses are designed to walk. Studies show that horses in more natural settings spend 60 to 70% of their day walking while grazing. That’s not possible in a dirt paddock. (In my area, it’s rare to have grass pasture. The trade-off at this barn is excellent care, facilities, and people, and the trainer that I want to work with.) Perhaps I should consider Maggie Tonka’s exercise coach? There are only thirteen horses at Tonka’s barn. The barn owners try their best to be match-makers. Tonka has yet to find a best buddy. Tonka and Maggie get along fine when there’s no food involved. Being with Maggie is better than being in a paddock by himself. Maggie will have to do for now.

In any event, there was an easy solution to returning to the feeding detente between these two. It was obvious to me which stick in the pile had upset the equilibrium. I mentioned a solution to the barn owner and the next day all was fixed. In this paddock, the hay had been put into nets that are near enough to each other that Maggie could physically control both of them. Fortunately, there’s a third net further down the fence line, and that’s where Tonka’s hay is being put. Now that there is space between the two horses all is fine.

(Tonka is turning away from the net to come and say hello to me. It’s hard taking photographs when your horse is happy to see you!) 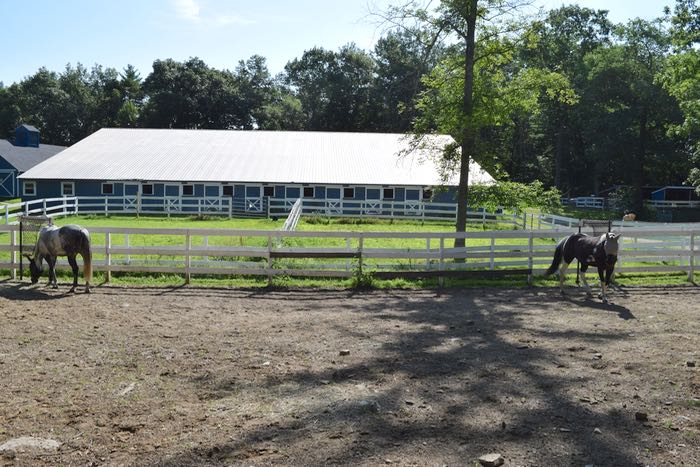 I’m available to do this sort of observation and behavior analysis for your horses (or other animals). Read about what I do at my other website, The Cooperative Horse. The first consultation is free. Email me.