Warning – graphic photo. (I put these up because my readers have told me they’re valuable. I’m sorry that they are difficult to look at.)

It was clear that Opal wasn’t going to recover, and that her time was up. Opal was a Delaware, an old-fashioned meat breed,which is a heavy placid hen, so, when I could see her keel bone projecting from a concave chest, I knew that despite the fact that she was still eating, that she was starving. Whatever was wrong was keeping her from processing her food.

Here is Opal as a three-year old. 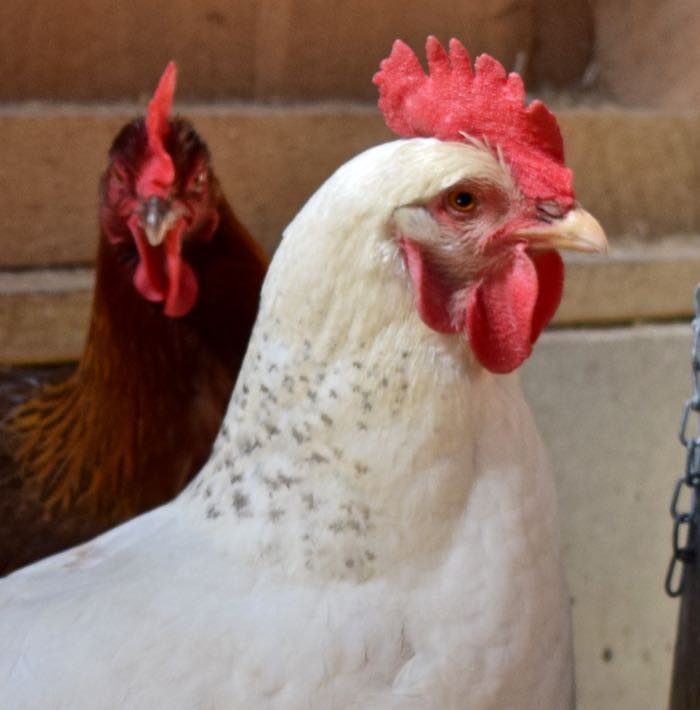 I didn’t want her to suffer. Steve euthanized her. (He did a quick break of the neck.) Then I did the necropsy. I’d expected to find all sorts of things wrong with her reproductive tract. This is a hen that has had Infectious bronchitis, which causes eggs to be wrinkled and weak. I’d expected to see internal laying, or infection. Or tumors. I didn’t. Opal’s ovary was intact, but not functioning – no yolks were forming. What I did see was that her reproductive tract had broken, and that some of it had formed a ball of “lash.” (This is a white mass made up of the tract and sometimes bits of egg.) But, that’s not what she died of. She died of a severely diseased liver.

In the photo you can see how elongated and mottled it is, with dark splotches of hemorrhaging. I don’t have a lab and I’m not a veterinarian. So, I can tell you that this organ was obviously compromised, but not why. I’ve sent the photo off to a vet to look at. If you know what is going on here, please let me know. No wonder the poor bird was becoming emaciated. This is not a functioning organ. This is why I don’t encourage people to baby their sick hens by feeding gruel, etc. If your hen isn’t thriving, then it’s likely that the underlying cause is something so serious that keeping the hen alive by such measures only prolongs suffering.  In an effort to keep content on the HenCam current, I often rework my FAQs. With Opal in mind, I have just rewritten the My Chicken Looks Sick! Now What? post. Do share. 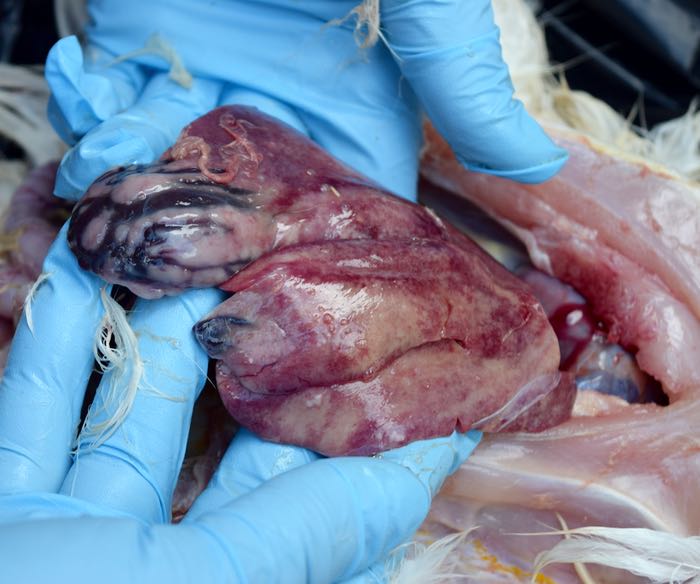 The rest of Opal was healthy except… this is only the second hen that I’ve found roundworms in, and they were numerous. The other hen was also an older hen that had gone through a slow decline. I’m convinced that it’s the stressed hens that have issues with internal parasites. I’ve looked carefully at the manure in the barn. I don’t think that my healthy hens are infected, but I’ll be especially careful about removing manure to keep the parasite load low in the barn.

The flock of Gems is now down to nine. Opal’s leaving did not cause even a ripple in the social order. Everyone looks healthy, and despite the heat and humidity they’re laying (the ones that aren’t broody!) Hopefully there won’t be anymore serious issues this summer. But, they’re older chickens. You never know. I’m fine with that.