When your flock is new and young, they’re hard to catch. Even friendly hens dart out of the way of hands reaching down to grab them. Then, something changes, and you’ll see this: 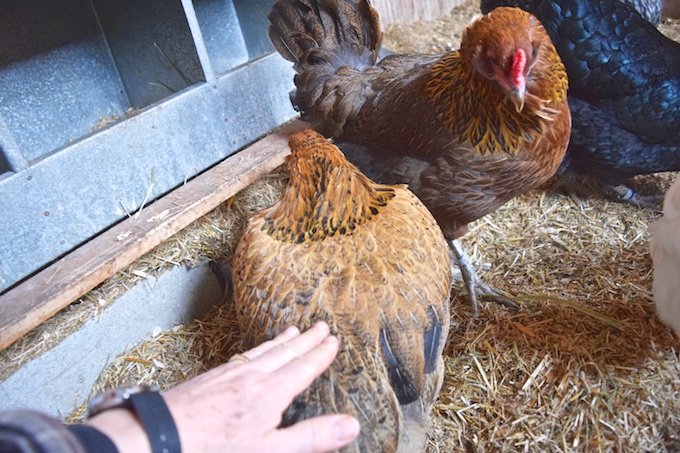 The hen lowers herself towards the ground, flattens her back, and tucks in her head. She squats.

You’ll usually first notice this when the days lengthen in the springtime. It coincides with the laying season. Squatting is what a hen does when a rooster approaches her to mate. Does that mean that she thinks you’re going to mate with her? Who knows what goes on inside of a chicken’s head? But I don’t think so. I think that an ovulating hen is hard-wired to flatten herself and be immobile when a bigger being is looming over her.

Many people like to interpret behavior as either dominant or submissive, but I think that view of the world is restrictive and that you miss what’s really going on. Submissive implies that the hen is passive. A hen has a choice. A hen can avoid a rooster (or me) by running off, and some hens have no problem telling a rooster what’s what. Fertile hens are receptive to mating, and squatting is a way to communicate that. She is an active participant in the action, not simply a meek female. (This said, if the enclosure is too small, and there are too few hens per rooster, the dynamic changes to the detriment of the hens. Most backyard set-ups aren’t suitable for healthy behavior between roos and hens.)

As with all behavior, it’s complicated. Mating can be rough on a hen. The rooster can rake her back with his talons and rip feathers off of her neck with his beak, and so the squat is also a protective position – you’ll see it when an aggressive hen attacks another. The weaker hen will turn her back to the bully and squat. This shields her head and belly, and changes her center of gravity so that she stays upright.

Although it’s generally true that hens that squat are the best layers, that’s not always the case. Misty lays daily and yet you won’t catch that lean, fast Andalusian, squatting – if I loom over her, she speeds off.

Beatrix, though, is a mild-mannered Ameracauna. When I need a hen for a school visit, there she is, looking pretty and calm, 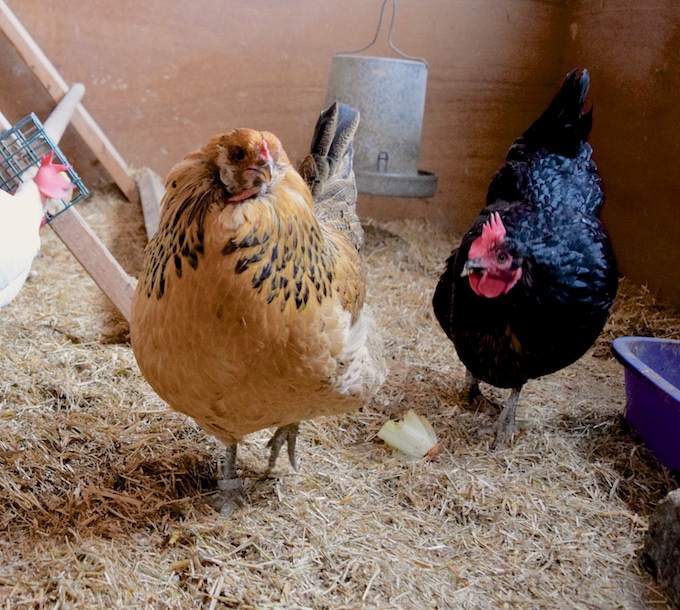 and when I reach over, she squats. 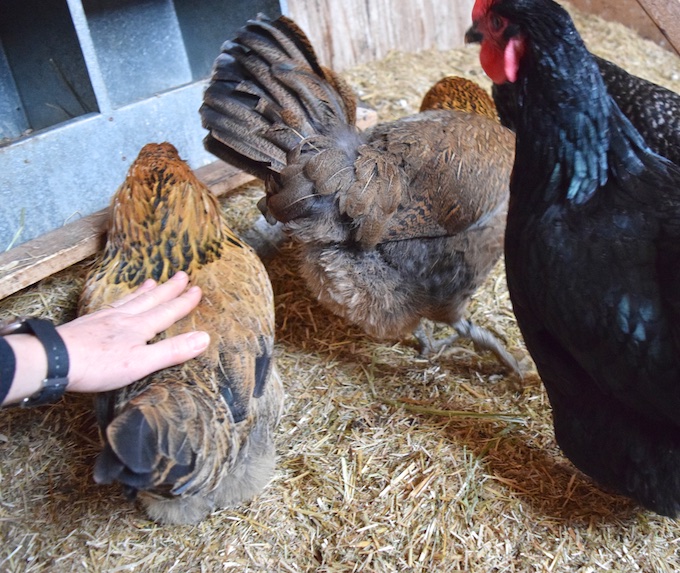 This is why Beatrix often gets to meet children, and Misty stays home.