If you keep pullets that hatched last springtime, then you’ve likely been enjoying their eggs all winter. Laying might have slowed down, but it shouldn’t have ceased. (You don’t even need a lightbulb in the coop for winter eggs from young chickens.)  If you have older hens, that molted this past autumn, then February is the month when they get back into lay because the molt has given them a rejuvenating break and sunlight is increasing. For some of my hens, February and March are peak laying months. But, for many hen keepers this is a time of worry. Why isn’t my hen laying? What’s wrong?

Let’s look at my chickens for an explanation of why some hens lay and others don’t. I have two flocks. They live in separate barns, but each structure has large east and south-facing windows. The chickens are fed the same feed – I use Poulin Grain laying hen pellets – supplemented with oyster shell and grit, free choice, vegetable scraps from my kitchen, and a small amount of scratch grains. I toss chopped alfalfa into the bedding. Both flocks are healthy and have been exposed to the same germs and worms. Both flocks are a mix of breeds. All molted at the end of last summer.

All six hens in the Little Barn are laying. (There’s one girl in this photo who is not making eggs, but she’s not a chicken!) 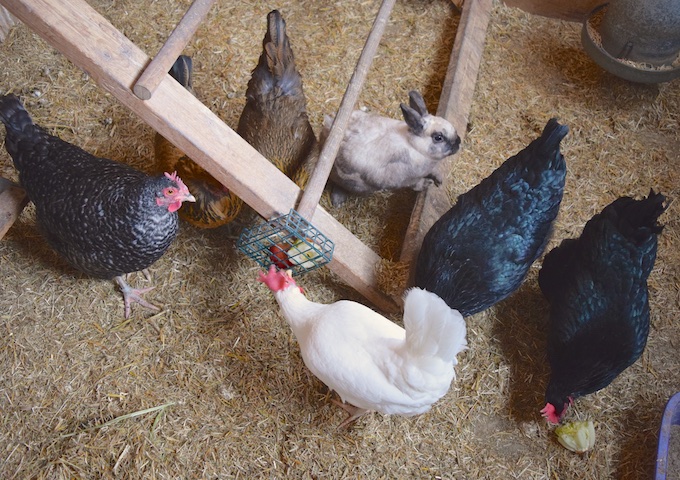 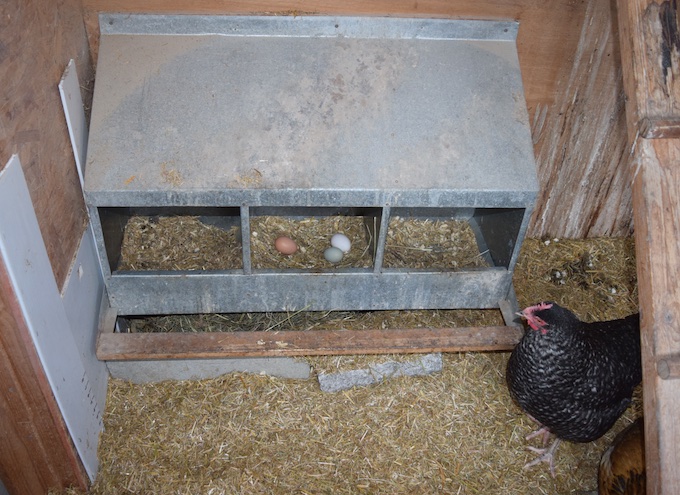 Astoundingly, the White Leghorn, Twiggy, never did a full molt! I know this, because there were no white feathers strewn about the coop. Although in December her laying slowed to only two eggs a week, she never stopped. No wonder the modern hybrids used in industrial farms are descendants of the Leghorn.

Meanwhile, only one hen of the ten in the Big Barn is laying. Misty. The Andalusian. 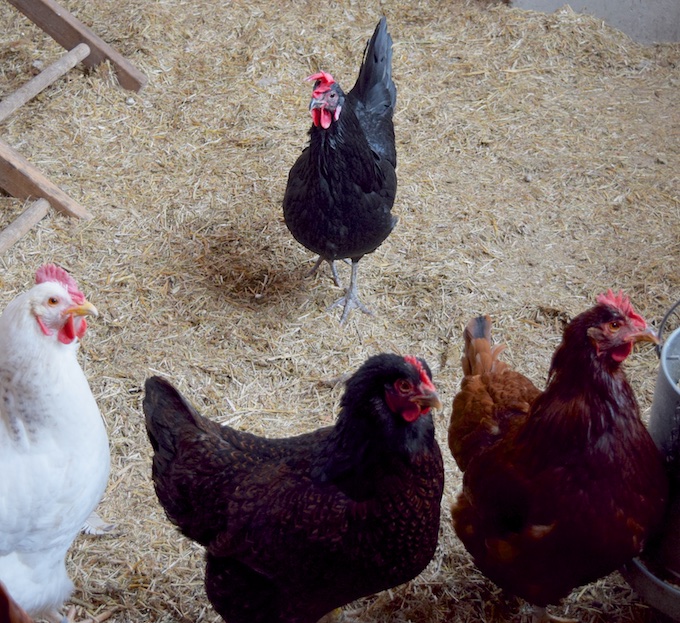 What’s going on? The answer is simple. The nine hens not laying are two years older than the others. The Big Barn flock hatched in the spring of 2011; that is, all but Misty, who is the same age as the Little Barn hens – she and they hatched in the spring of 2013. She’s proof that there’s nothing different in the Big Barn other than the age of the hens. This is why farmers can’t keep older chickens, they’re not financially viable. My soon-to-be four year old hens are past their prime. Already. This is not a modern phenomena. Even a century ago laying hens were expected to be productive for only two years. With all of the backyard chicken keeping boosterism out there, this reality is glossed over. Even the major hatcheries tout that hens that will lay for up to eight years. Some hens will, but not most. This misinformation is leading to unmet expectations and misguided, poor care of backyard hens. Knowing the truth about what the future holds will make you a better hen keeper as your flock matures.

I do expect my Big Barn girls to resume laying, maybe next month. I also expect that each individual will produce fewer eggs than last year. I predict (based on 20 years of chicken keeping experience) that some will not lay at all. By the age of four, much goes wrong inside of a hen. Some can no longer form sturdy shells. Some will be diseased. Some will simply give out. But, a few individuals will keep going. I’m not a real farmer. I have enough room for a flock of productive hens and another of retirees. I’ve had hens live to be nine years old. I can keep the low producers as beloved lawn ornaments. My hens are lucky, and so am I.