One of the things that Tonka’s previous owner, Amy, taught him was perfect manners at the mounting block. Tonka stands parallel to it while I put my foot in the stirrup, swing my leg over his back and settle down into the saddle. He doesn’t take a step until I ask him to move off. This is a very nice behavior, as getting on a sideways shifting, nose in the air, scooting-off horse can at best be awkward and at worst dangerous. 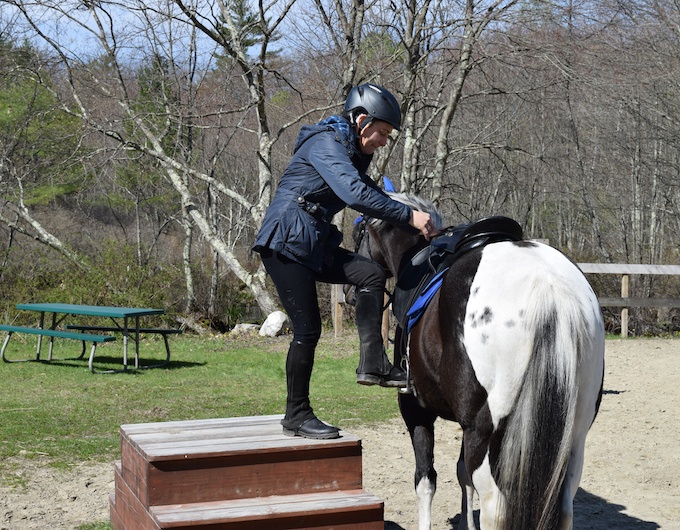 Horses’ backs are built to carry weight. My 130 pounds isn’t a big deal to Tonka. However, a rider can and does interfere with a horse’s natural grace; many of us spend a lifetime learning how to ride in concert with our horses. But, you don’t have to be a perfect rider to sit quietly on your horse and make an outing enjoyable for both of you. That mutual relationship begins well before you are actually in the saddle and underway. You develop trust on the ground. Then, you set the tone when mounting. I’m careful getting on, because that first step into the left stirrup can pull the saddle against his withers (that’s the prominent bone rising at the base of the neck.) Using a mounting block is much more comfortable for him than if I were to haul myself up from the ground. Using the mounting block, I can step on and slowly ease myself into the saddle, careful not to thump down on his back. Since I purchased him in December, Tonka has stood quietly while I’ve mounted, and, as far as I can tell, has eagerly looked forward to our rides. How do I know this? I can’t read his mind, but I can read his body language. At the mounting block, Tonka is calm, and yet has an engaged expression, his ears forward, his mouth relaxed. A horse that is annoyed lays her ears back and wrinkles her lips. She swishes her tail. She swings her head. A dull horse that has given up, hangs his head and barely acknowledges his rider. Tonka is unfailingly pleasant and yet alert to all that is going on around him.

(In the photo below, I’ve almost dropped my gloves, but Tonka is unbothered by my awkwardness. He’s ready to get going, but is waiting for what I ask next.) 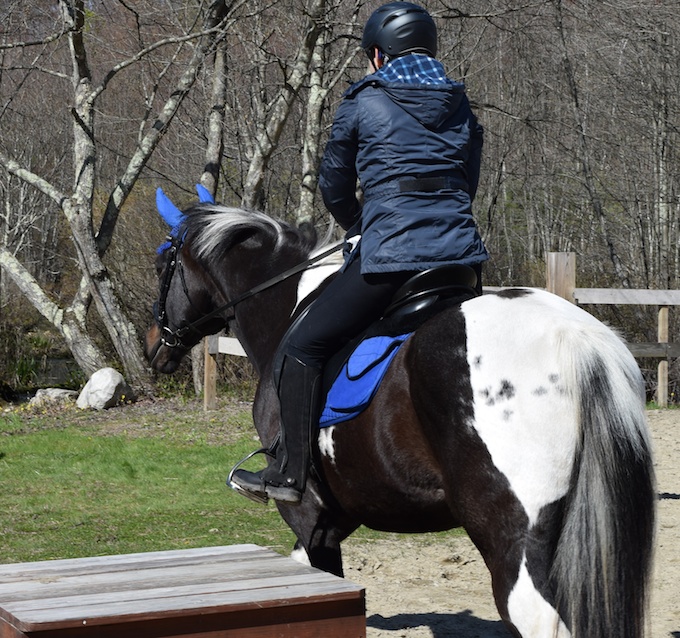 Last week Tonka’s good behavior stopped. He still walked calmly to the mounting block. But when I went to get on he stepped forward. I walked him back into position, started to put weight on the stirrup, and he swung his quarters out of the way. This wasn’t a one-time occurrence. Every ride that week started with this avoidance dance. Good behavior doesn’t always last. Had Tonka lost his mounting manners? All too often, the rider’s default with misbehavior at the mounting block is to whack the horse back into position, or to pull on the reins to back him up. It looks harsh, and it is. Those reprimands come from the belief that the horse is blowing me off. Even if you don’t know anything about horses, you’ve surely heard these things said about dogs. He knows how to come, says the exasperated owner, he’s ignoring me on purpose. Or, he knows not to get into the garbage and he’s doing this to spite me. Punishments ensue. Note that those negative thoughts are often couched in a way that insinuates that the animal is doing something to the human on purpose. That the animal knows better. That somehow the animal has an intent to do wrong.

I don’t see it that way. I believe that animals always have the intent to do right, at least in their world view and for their own needs. Taking the view that intent always comes from a positive place from the animal’s perspective removes any anger that I might have. Instead of retaliating, I ask, what can I do to make a behavior that I want fulfilling for both of us? I ask, does the animal truly know what I want, or is it not a solidly trained behavior? I have to ask, what is the “misbehaving” animal telling me? In this case, what was Tonka saying? His stepping aside at the mounting block made it clear that he didn’t want me on his back. My job was to figure out why. There were so many possibilities. Did he no longer want to be ridden? Was the new green spring grass calling to him and was more appealing than going out on the trail? I’ve started working in the ring, asking him to do the equivalent of stretching gymnastics. Despite my care to not overdo and to build his muscles up gradually, was Tonka avoiding this work? These were all valid questions, but way too complicated! Animals rarely look ahead like we do. What was bothering Tonka was in the here and now, at the moment of mounting. What had changed?

I checked Tonka’s saddle. A saddle that fits poorly can press on the backbone, or pinch the horse’s sides. Tonka’s saddle fit him like a glove. In fact, to make him even more comfortable I had recently bought a new girth, one made of soft neoprene and contoured to allow more movement of his elbows. When I tack him up, I first attach the girth loosely, and increase the tension only after I’ve walked him towards the mounting block. Before getting on, I buckle it up to the proper hole. A loose girth is dangerous because it can allow the saddle to slip sideways when riding. You’re taught to tighten the girth before getting on, and again afterwards, to make sure that it is secure. Do you see where this story is going? Poor Tonka, the new girth is stretchy, and I had pulled it too tight (something impossible to do with his other girth) which jammed the saddle down hard on his sides.

It took Tonka four days of moving away from the mounting block to finally get through to me that what I was doing hurt. A testament to his sweet nature is that he never became dangerous or rude. He simply kept trying to give me the message in the only way that he could. Sometimes I can be so dense!

Tonka is back to his good behavior only because I didn’t call what he was doing “bad.” I listened to him. Maybe next time when something like this comes up, I’ll be quicker to figure out what Tonka is telling me. In the meanwhile, I appreciate Tonka’s good manners. You never know when you’ll need a mounting block, or where it will be. 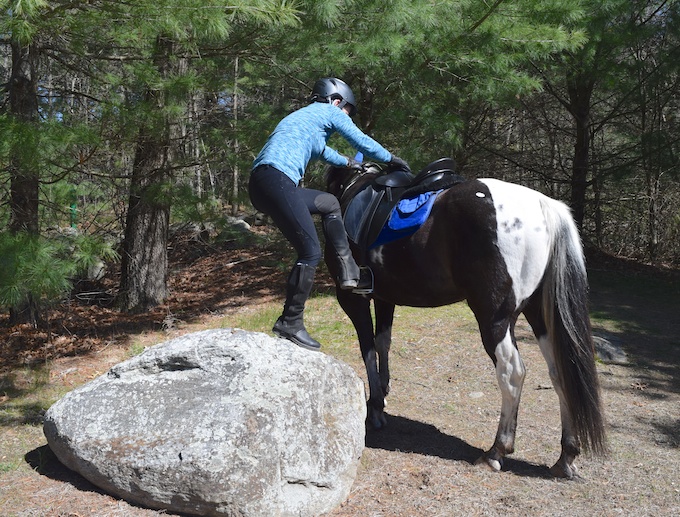