Phoebe is the second rabbit to live with the flock in the Little Barn. The first was Candy, the Empress of the Barnyard. She was a clever, imperious lop-eared that liked to play tricks on the chickens. If you see Betsy chasing Phoebe, it’s because she bore the brunt of many of Candy’s jokes and has little tolerance for any bunny. Phoebe, however, isn’t Candy. She is mild-mannered, and so sweet that she wouldn’t think of teasing the hens.

Phoebe genuinely likes the chickens and wants to be around them. That became clear when she abandoned her cozy rabbit hutch to live in the Little Barn. She created a den under the nesting boxes, and I accommodated her wishes by putting hay under there, and by placing her dish of rabbit pellets nearby. 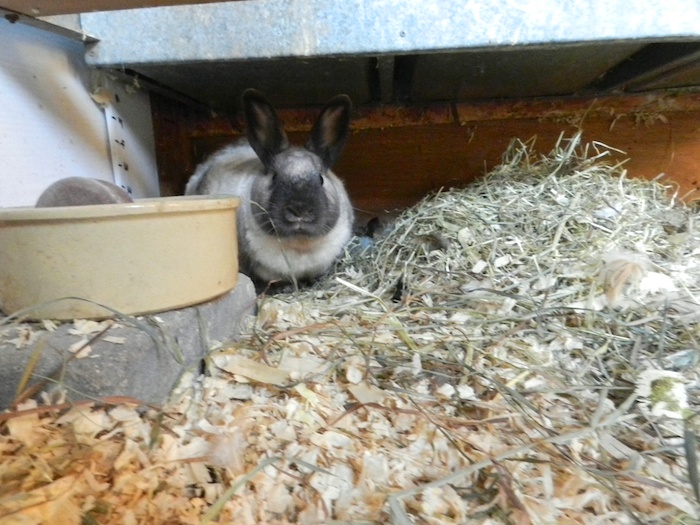 In the morning, the hens jump off of the roost and mill around, waiting for me to open the pop door to let them out. Phoebe is just as eager and maneuvers into the front of the crowd, and is often first out the door. 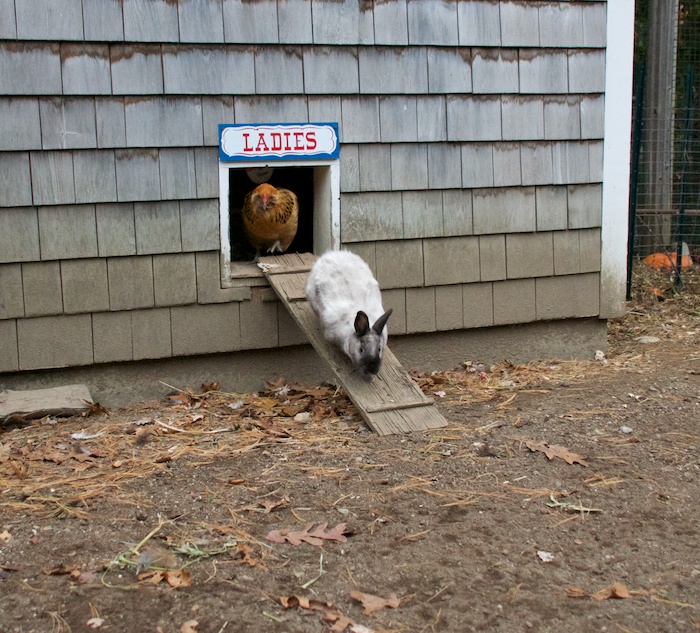 That’s because rabbits don’t like to mess their houses, and given a choice, they’ll use a litter area off in a corner. This is where Phoebe goes. 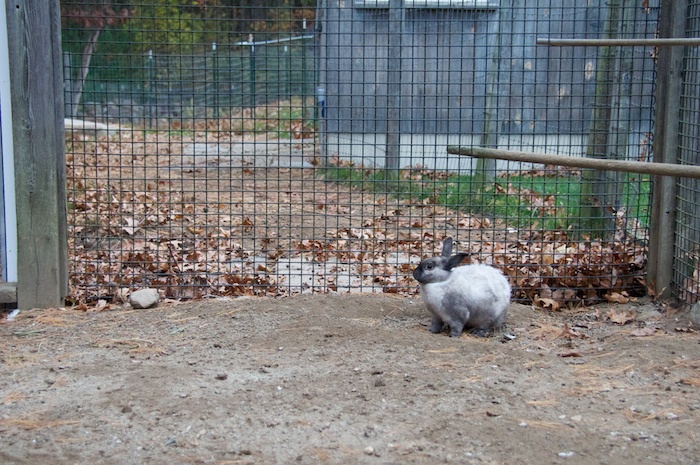 Rabbits are crepuscular, meaning they are most active at dawn and dusk. During the day, Phoebe naps in her den, or hangs out with the old hens dozing in the sun. 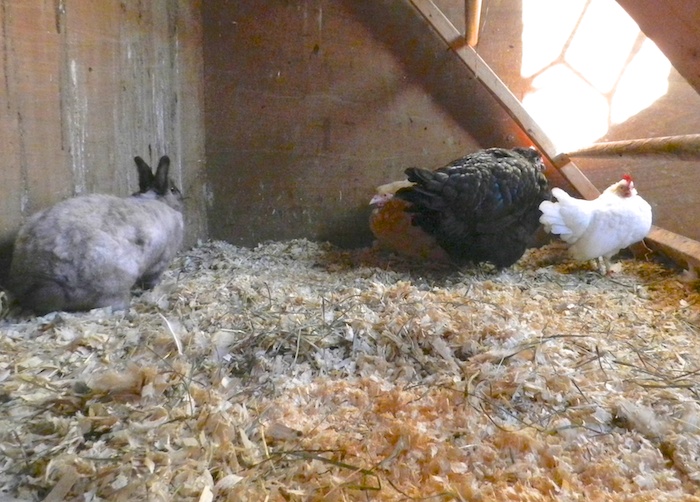 Phoebe does have bursts of activity, even at midday. She sprints around the pen, she goes over to the fence to chat with the goats, and she eats. Along with downing her pellets, Phoebe forages through the weeds and things that I put into the hens’ pen. She especially likes to gnaw on the pumpkin shell. The Ladies sometimes chase Phoebe away. They’re being chickens, and use chicken body language to defend their turf and bit of food. At best the Ladies get a beak full of fur. Phoebe is usually unimpressed and simply hops away. 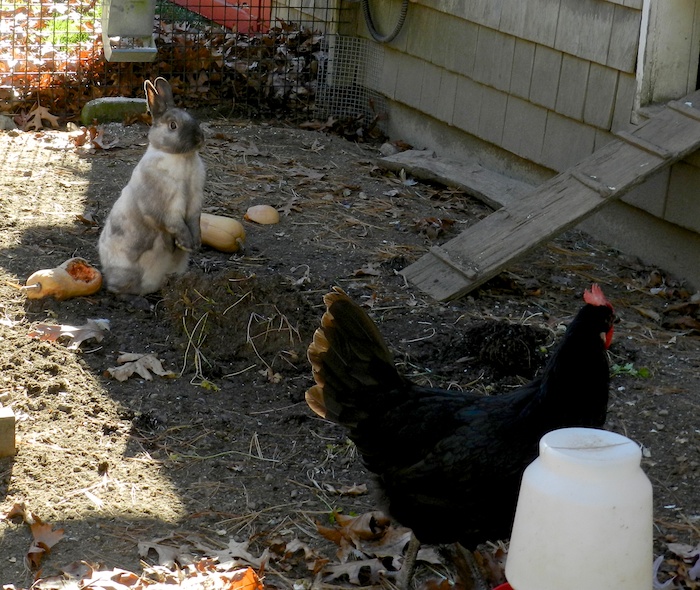 Sometimes I put greens into the suet feeder hanging on the roosting bar which keeps the vegetable clean, and allows Phoebe to take her time nibbling. 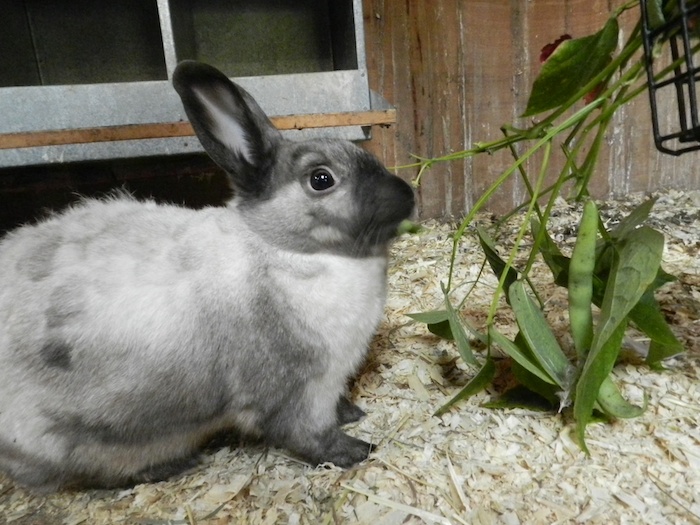 Once in awhile, the chickens eat Phoebe’s rabbit food. 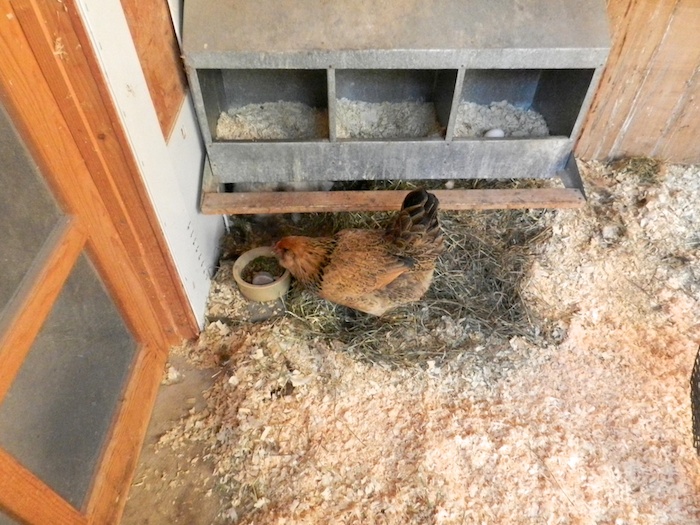 It’s not bad for them, but I’d rather that they eat their own pellets. My solution is to block it off. Phoebe can see out, but the hens can’t reach the food. 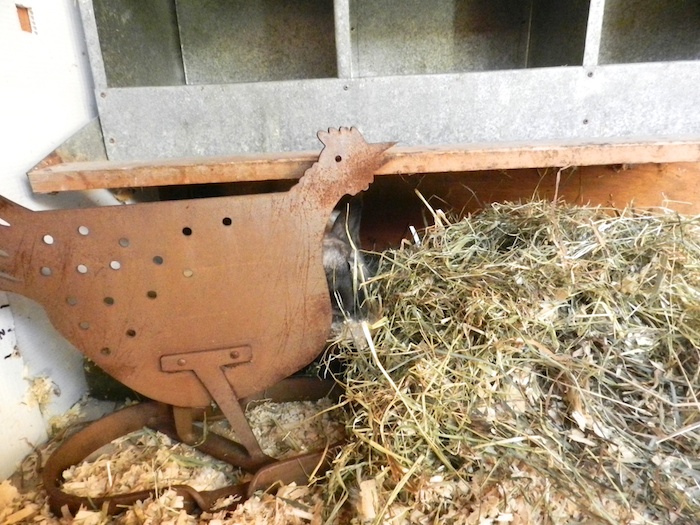 Unfortunately, there’s not as easy a solution to prevent Phoebe from eating the hens’ food. 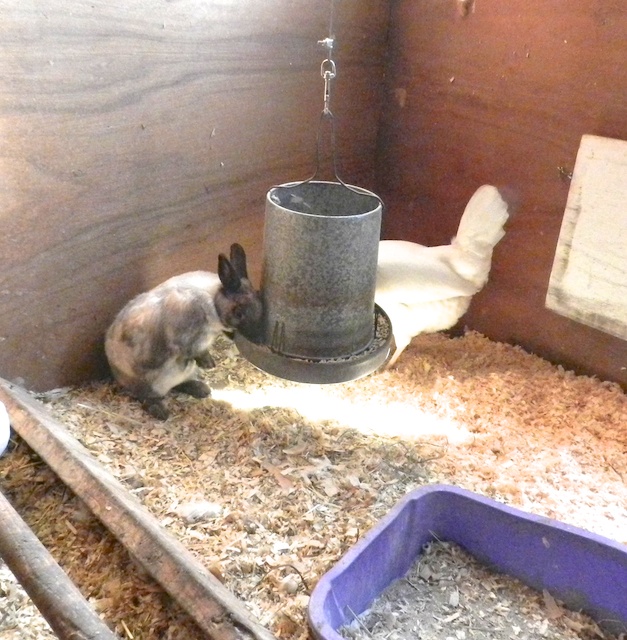 It’s not ideal for a rabbit, but it is vegetarian, and the bulk of what she eats is the right stuff, so I don’t worry about it. Candy lived to the old age of nine on this same exact diet.

At dusk, the chickens go inside the coop to roost. This is Phoebe’s favorite time of the day. She’s always outside, romping, or eating, or visiting with the goats. But it’s important for her to go inside, safely tucked away from nighttime predators. I didn’t want to chase her in, so instead I trained her to come. Knowing what she wants and being consistent is the key. Every night she watches me close up the Big Barn and put the goats away. She kicks up her heels and does one last tear around the pen, and then she runs inside for her treat. Banana chips. 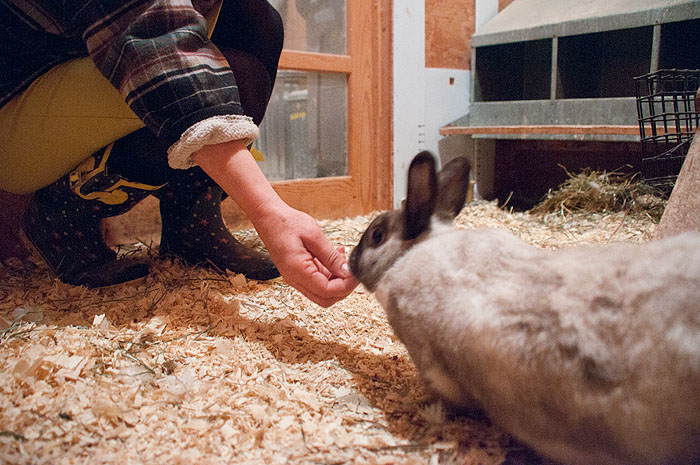 I feed her two, then close up the pop door and say good-night.

A bag of banana chips is $1.19. If you’d like to send Phoebe a present and support what I do here at the HenCam, you can buy her a bag here. 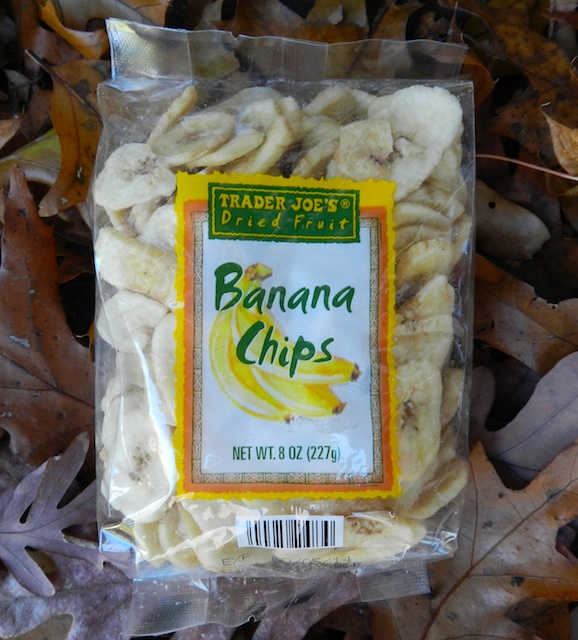