At only six weeks, the 26 chicks look like half-sized versions of their adult selves. Temperament due to breed differences were obvious early on, and now individual characteristics have become quite clear. I know each chick, but some more than others. I sit with them. I try to handle each one every day, but when there are more than two dozen, and when they are fast and have space to run, catching and holding each one isn’t easy.

Some of the chicks get more of my time than others. They ask for it. I haven’t been feeding them from my hand, as I’ve wanted to see which chicks naturally gravitate towards people. A handful of the birds think that I am the most interesting thing around. This is the sort of behavior that I’ve been watching for. These outgoing and yet calm chickens are the ones that I’ve selected to live at the nursing home.

The Delawares are all placid and friendly, but this one in particular wants to be nearby and likes getting picked up. She also happens to be the prettiest of the three Delawares. She is going to the nursing home. The Andalusian behind her is also curious, but flightier. She’s staying with me. 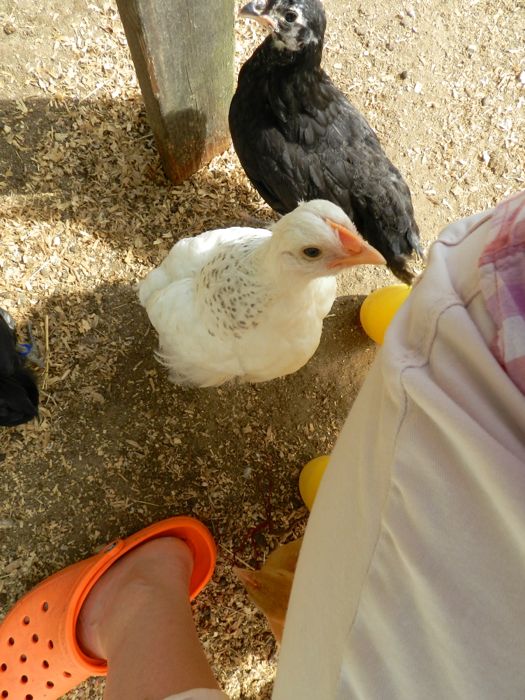 Of the two Buff Orpingtons, one is always out the door first, and last to bed at night. She is always underfoot and is fine about sitting in my lap. She’s going to the nursing home. The other Buff Orpington looks the same, but doesn’t have half of this one’s personality. I’ll be selling her and she will make a fine laying hen in a backyard flock. 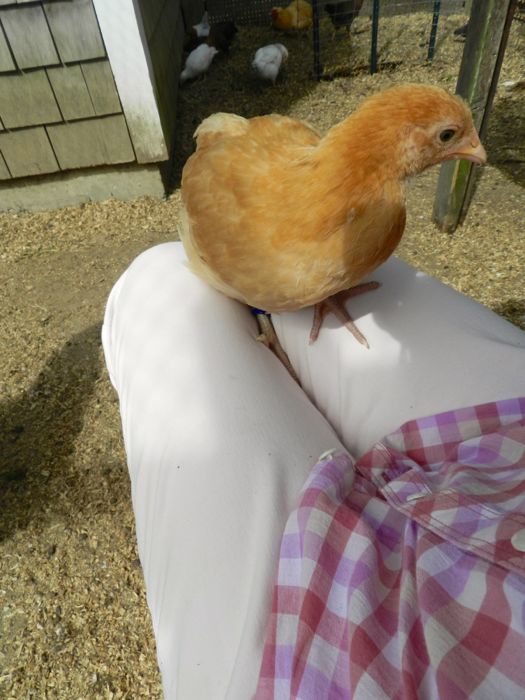 This Maran is curious and yet calm. She’s going to the nursing home. I’ll be keeping the other Cuckoo Maran. 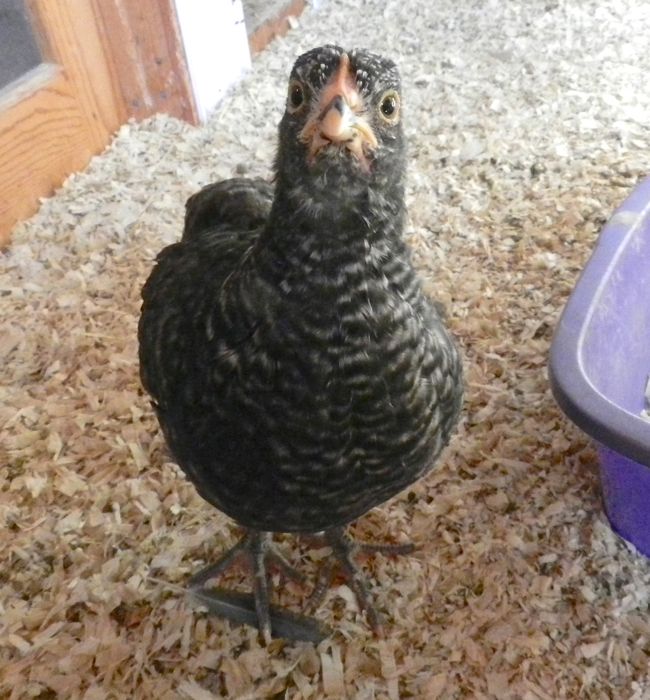 Early on I knew which breeds were not going to the nursing home. I have four leghorns, two brown and two white. Perhaps in a smaller group of chicks, and with more attention from me, they wouldn’t be so aloof. But, from the beginning I felt like Wile E. Coyote trying to catch the Road Runner. 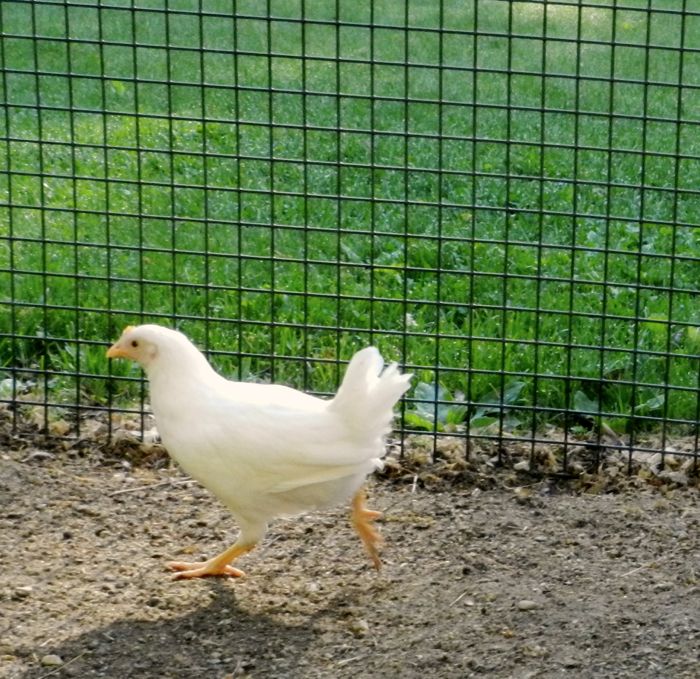 There are five pretty Ameracaunas, all with unique markings. The other day I took some leftover popcorn into the coop to see who would be bold enough to eat from my hand. This Ameracauna came right up, and she’ll join the nursing home flock. A Black Star did, too, and she’ll be going to the nursing home as well. Black Stars are excellent layers and get along with others. 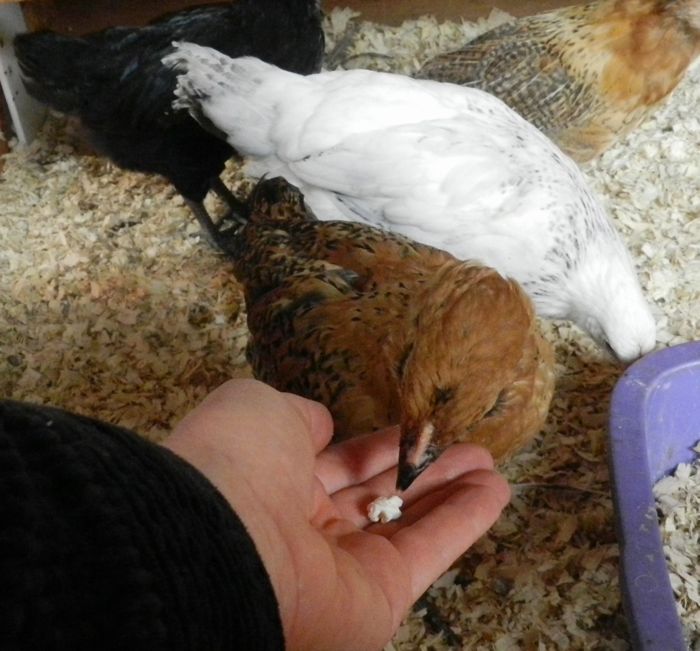 Some chicks have always been in the background. They’re nice, but not outgoing enough for the nursing home These include most of the Black Stars and the Dominiques.

And then there is Owly. From the first days here this chick strained her neck up and looked at me quizzically. She’s an endearing, funny bird. She’s staying with me. 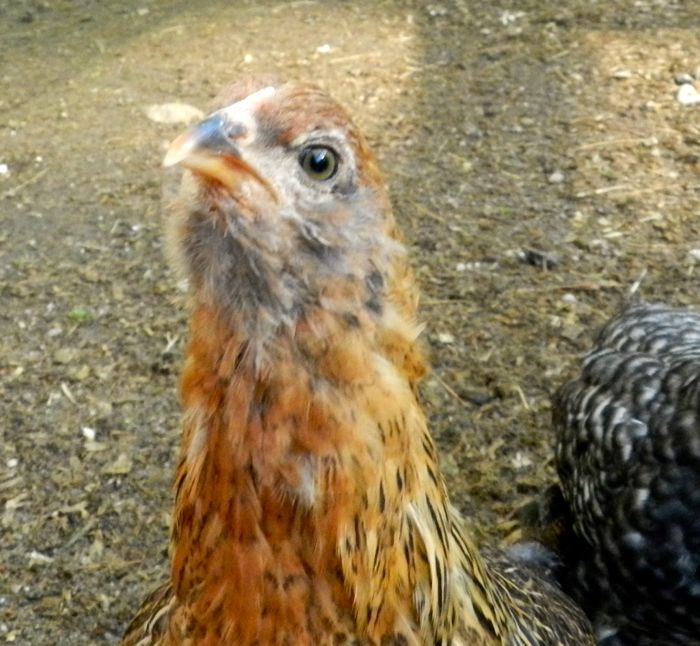 The chicks will be ready to go to their new homes in two weeks. I have 13 started pullets for sale (plus Mr. Grumpy, the Andalusian rooster. He’s free to a good home.) For sale are: 1 Blue Andalusian, 2 Dominiques, 3 Black Stars, 1 Buff Orpington, 2 Delawares, 4 Leghorns and 1 Ameracauna. Five chick minimum per buyer. $20 per bird. I prefer to sell to someone who is starting a new flock. Pick up here. I have a buyer for all of the chicks not purchased by June, so if interested, email me right away. Preference is given to those who have taken my Chicken Keeping Workshop, or are coming to the one on June 8 (Space still available. Sign up here.)

Meanwhile, I am greatly enjoying all of the hubbub of having 26 chicks in the Little Barn. But, it’s getting a tad crowded and the Old Girls are pining for a bit more peace and quiet. I’ve been assuring them that things will settle down, somewhat, in two weeks. Then again, I’ve a feeling that Owly is the sort to get into mischief.