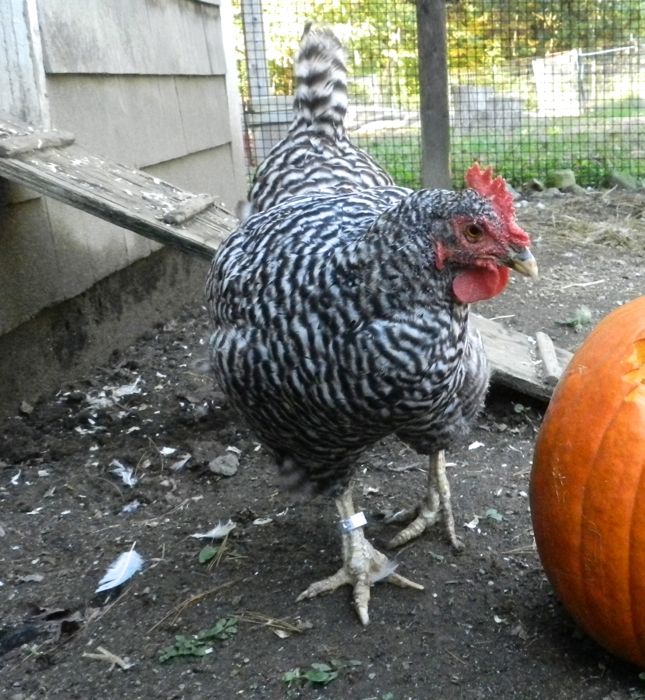 This morning I picked Eleanor’s lifeless body up off the floor of the coop. There should have been heft as she was a large Barred Rock, but it was as light as if I had plucked up a page of a newspaper blown in the wind. There was still a bit of warmth to her. She hadn’t been dead long.

Her death was not unexpected. Actually, I’d expected her to die several years ago when I noticed her limping, and saw that her bottom was hot, red and featherless. Eleanor recovered from that mysterious disease (although the skin near her vent remained rough and red forever after.) For the last couple of years, I’ve said, “Eleanor isn’t going to last the winter,” but I was wrong, until this past week when I knew that she was done.

Eleanor was seven and a half years old and I have had her since she was a chick. She came here with Edwina, they were two Barred Rocks bought from a neighbor who had extra chicks in a Murray McMurray order. For years I didn’t like her much. Often, when Barred Rocks are in a mixed flock they are at the top of the pecking order, and these two were true to type. It’s very difficult to integrate new pullets into an established flock with Barred Rocks, and Eleanor and Edwina were ruthlessly aggressive. Nor were they particularly interested in people. I kept them around, even after their egg-laying days were done, because I didn’t have it in me to cull them. They were lucky that I had the room to leave them in the flock of older hens and ignore them.

But, they aged. They slowed down. They mellowed out. Eleanor became a peaceful, sunbathing, undemanding old lady. Her skin and scales on her legs sagged with age. I had to trim her toenails because she could no longer wear them down by scratching in the earth. I became fond of her. She had a steady gaze and a sensible manner. Every morning when I tossed the old hens a handful of hulled sunflower seeds, I watched to make sure that Eleanor was still eating. And she was, but as her light dead body tells me, not enough.

Eleanor did not suffer. At least I don’t think so (although I have no doubt that her body was riddled with tumors.) She was out and about until the end and although very, very slow, was still part of the flock.  She still roosted. She could still heft herself out of the coop’s pop door in the morning and go up the ramp at night. In the last two weeks I’d noticed her dozing in the sun, seemingly as if she had stopped mid-step. She hunched her body in a way that I’ve come to recognize is done by a hen at the end of her days. She was too old to baby, too old to extend her time by a week or a month. She looked content enough and she wouldn’t have liked the fuss. I left her alone. I’m sorry to see her go, but I am relieved. I’ve seen enough old hens suffer and I’ve had to make the difficult decision to euthanize too many times. Eleanor saved herself and me from that. She went on her own terms. Rather like how she lived her life.