Before there were battery-cage “farms,” eggs were a seasonal food. By New Years an egg was precious. In the winter eggless gingersnaps were baked instead of layer cake. Eggs weren’t eaten for breakfast. A farmer could sell an egg in February for twice what a June one brought, and that income often made all of the difference in a farm’s ledger. A productive hen would be expected to lay about 140 eggs her first year. Egg production decreased 20% a year after that. Once in awhile a hen laid through the winter. Once in awhile a hen had a short molt and resumed laying before the others. These hens were kept and bred. But, by age three the others would be in the stew pot.

Today a hen, in a large commercial operation, is genetically designed for maximum egg production, and is kept in a warm barn, with light 14 hours a day, fed a controlled diet designed for maximum egg production, and is expected to produce upwards of 260 eggs a year, some almost 300. By the end of her second year, before her second molt, she’s spent. Most are thrown out – they aren’t even worth putting into soup. I think about this when I make decisions about how to care for my hens over the winter, and what I expect from them.

I don’t keep chickens for a cheap source of food, or even to have eggs to sell to my neighbors. I have chickens because I want fresh eggs for my own table and because I like having hens in my backyard. I have a lot of chickens for a three-person household, so they don’t have to all earn their keep. The girls in the HenCam coop are retired. Agnes, being a hybrid designed for laying, still leaves me a few eggs a week. She takes an amazingly short two-week break for a molt. But the other old hens only use the nesting boxes for a cozy place to take a rest. Agnes can’t keep me in enough eggs for breakfast, and unlike a farmer in 1921, I do want eggs and toast on cold winter mornings. So, this past spring I got a new batch of chicks, the Gems (so-called because I named them all after pretty rocks).

The Gems are a mix of breeds that mature and lay eggs at varying rates. They were slow to start laying, and then it got into late fall, with shortened daylight hours and dipping temperature. I was hoping for a few eggs this winter and not expecting to fill my egg cartons. But, they’re pullets. They’re healthy. They’re fed well. This is what I had in my egg basket yesterday: 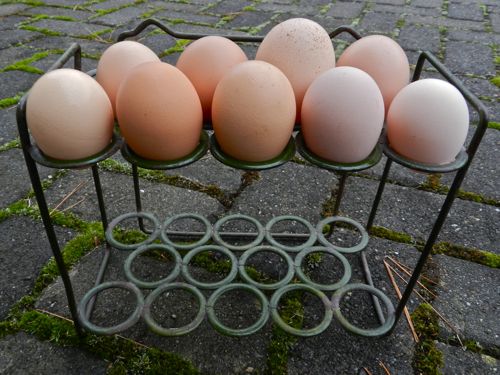 The big egg in the back is from Agnes. The rest are from the Gems. That’s a wealth of eggs. I’m giddy with eggs. I made a double-batch of Peach Bread Pudding for my local library’s employee appreciation lunch. I had enough for a cheddar omelet for breakfast. I made vanilla banana pudding. There are hard-cooked eggs in the refrigerator for snacking. And I still have two full cartons calling to me from the fridge.

This abundance isn’t going to last. Night will fall earlier. It will get colder. But, kept in the refrigerator, in a carton, an egg will remain fine for baking for up to eight weeks. If I can rein in my baking exuberance, the Gem’s eggs will see me through until late February when the spring laying season begins.

I’m often asked if I light the barn at night to encourage more egg laying. Off and on over the last fifteen years of hen-keeping, I’ve experimented with this. But what I’ve learned is that the pullets lay anyway. The really old hens won’t lay whatever you do. As for the girls in the middle, I think that they deserve a break. It’s hard work and physically depleting to lay an egg day in and day out. After the first year, a chicken molts and grows new feathers which uses up even more of the hen’s resources. They need a break from egg laying to do this. I believe that a winter’s rest sets them up to have a healthy and productive laying season, hopefully well past the age when the hens in the factory farms are discarded.