Most chickens live in mind-boggling massive flocks that number in the tens of thousands. The animals are genetically almost identical and in that sea of feathers and dust there is no individuality. Although the hens know who each other are – they recognize each other by their combs which are as distinctive as human fingerprints – there’s little interaction among the birds in the stressed commercial flocks. Besides, it takes time to form relationships, and meat chickens live to be only eight weeks, and laying hens less than two years.

But, in my backyard the hens have the time to get to know each other. They have the space to decide who to spend time with and who to avoid (everyone avoids Lulu.) Chickens are not long-lived and some hens seemingly up and die by the age of three. But others live on. Blackie and Eleanor have been on death’s door for a year. Eleanor survived a bout of illness and a swollen abdomen (the cause undiagnosed.) Blackie is stiff and slow, probably filled with tumors, and is losing her feathers and sleeps most of the day. Her comb is grey. Neither has laid an egg for more than a year. They’ve become lawn ornaments. When they were young and active, Blackie and Eleanor ignored each other. The Barred Rock was aggressive and did not share food, the Australorp was shy and stayed at the perimeter of the flock. But, these days they are arthritic and calm. Both enjoy a sunbath. Together. 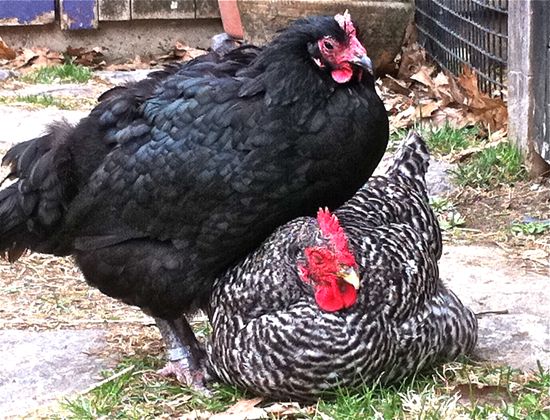