For a couple of years I’ve kept two separate flocks, one in the big barn and another in the HenCam coop. But, I have fifteen chicks coming next month and I need the big barn for them. So, I needed to combine all thirteen hens into the HenCam coop. Each of these flocks are set in their ways. They have an established hierarchy. To a visitor the pecking order isn’t obvious as all is peaceful. But, upset the equilibrium and drama ensues. I knew that I couldn’t simply throw them together and hope for the best. There would have been bloodshed. But I had a plan.

For two days I let the flocks free-range under my watch, where they could eyeball each other but keep a distance. Each day I lured them all into the HenCam pen with treats. I left the door open. Although Buffy is the leader of the HenCam flock, she took one look at the other six hens and calmly walked away. She’s smart enough not to engage. That’s not the case of the two birds that I knew I had to keep an eye on – Maizie and Lulu. Lulu is a restless hen. She paces, she investigates, she hops. She’s like the child with no social skills who barges into conversations and annoys everyone. Maizie is territorial. She doesn’t like anyone and doesn’t tolerate anyone in her space. True to their natures, they set at each other. I separated them. I picked up whichever one was closer and held her until she calmed down. Soon enough, Lulu lost interest and hurried out of the pen. For two days, the flocks were physically close to each other, but under no pressure. They could leave if they want. When a hen has a safe place to retreat to there is less aggression.

The hens I was most worried about were the Polish – Tina and Siouxie. There’s something about their bobbing topknots that encourages pecking. Also, they can’t see anything, so an aggressive hen could attack them before they knew she was upon them (it does make them easy to pick up though!) So, I gave each of them a feather trim, and they can now see out and even have some peripheral vision.

Yesterday was a beautiful, albeit chilly, day. It was sunny but not windy, which was perfect weather for the hens to be outdoors and to permanently combine the two flocks. I prepared the HenCam pen by putting an extra waterer and feeder outside. You don’t want the hens to have to compete for those essentials. I placed a small stool in the center of the run so that I could comfortably spend time with them. I filled a container with scratch corn. With a little herding help from Steve, we got all of the hens into the pen. He shut the door. I sat down and tossed them their candy into all corners. 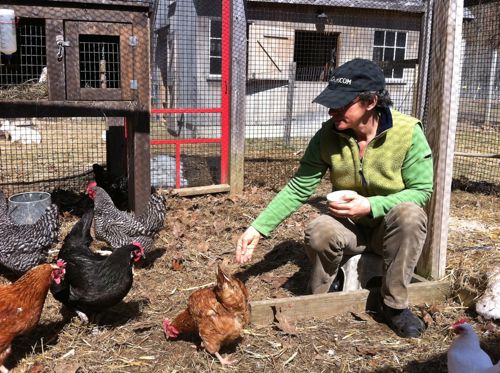 As soon as a hen looked huffy, I distracted her with the corn. I used only a tiny bit at a time. I didn’t want them to get full too quickly. I kept them busy hurrying here and there for the treats. It helps to know your chickens well. I could read their body language and interrupt aggression before it happened. The only hens that went beyond a ruffling of feathers were Lulu and Maizie. I had to physically separate them three times. Each time I picked up Lulu and calmed her down. Hens don’t have a long attention span. Within moments she forgot the tiff and wanted to get back to eating.

After awhile, they tired. The flock from the big barn settled on and under the outside roost. Having outside roosts really helps ease the tension between birds. They feel safe when they can get up off the ground. These hens felt so comfortable that they took dust baths and preened. 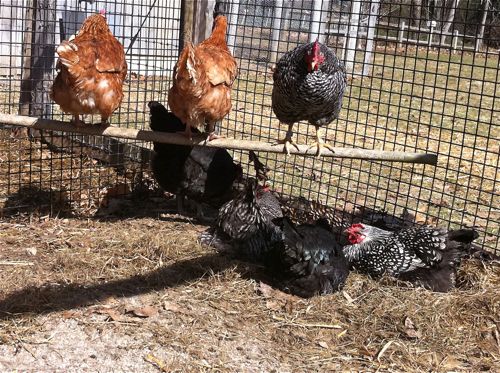 The hens ate and drank. 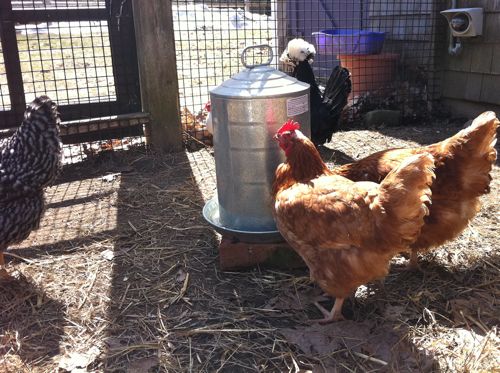 They walked past each other and ate next to each other, but generally stayed in their flocks. If I noticed any tension at all, I tossed corn.

Soon, all was calm – except for Lulu, who paced the fence. But, that’s Lulu. She barged past the Comets. She barreled through the dust bathing Australorps. They learned quickly to ignore her. Everyone does.

The last step was to introduce Candy to the hens. She had been watching from her hutch. I opened the door and she hopped down her ramp. She settled onto her throne. Candy never  looked anything other than regal and implacable and yet somehow the hens knew she was not to be trifled with. The hens gave the queen of the barnyard a wide berth. 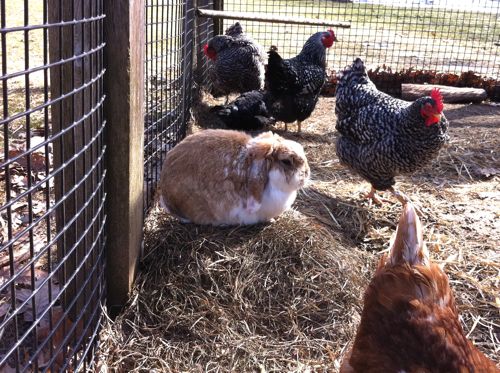 I imagine there will be a skirmish or two in the next few days. The weather is supposed to turn rainy and snowy. They’ll be a bit crowded. Lulu will drive everyone crazy. Maizie might feel threatened. But I’m sure it will settle out quickly.

It just goes to show that aggressive behavior can be countered with good management and kindness. Establishing a pecking order should be a subtle event. All animals need space and ample resources, an interesting environment to keep them busy, and time to get to know each other.

My next task is to give the big barn a thorough cleaning in preparation of setting up the brooder and ChickCam(!)