Of the two goat boys, Pip has always been the affectionate one. He likes to give sniffy air kisses. He likes to sit on my lap. He’s happy to spend time near me. Caper has been the indifferent one. He has better things to do – like eat. He’s like the child who doesn’t want hugs. But that’s all changed.

There’s an epidemic of ticks. It’s worrisome, because ticks are vectors for lyme disease, which is potentially crippling. The goats forage in knee-high grass which is prime tick territory. When a tick latches on, they rub themselves raw trying to get it off.

I’ve been checking them over for ticks, and in the process have been scratching their scabs, itching their itches, and removing the nasty bugs. The boys are grateful.

Caper has been especially enjoying the attention. It’s finally dawned in his goat brain that I’m not an annoying person keeping him from his dinner, but that I have an  important purpose, and that letting me do my job feels really good. Caper is now following me around. I’m surprised that he’s not head-butting and goaty pushy, but he’s acting the gentleman. He snuffles, he leans, he shows me an itchy shoulder. I scratch and rub. He smiles. Goat bliss. 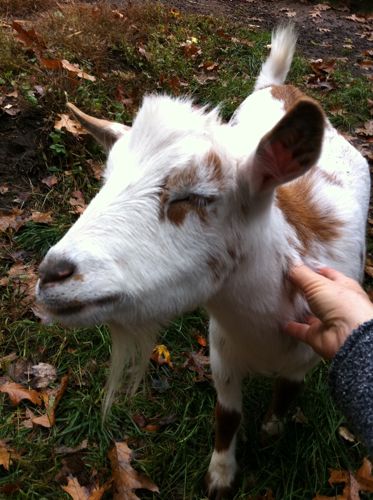