I was in Brooklyn, NY yesterday, dropping my son off at a summer program. The forecast was for 100 degree temperatures. It was slow going, moving him into a dorm. The air had a physical presence – like an unseen character in a sci-fi movie. I had parked in the sun near a grassy common. After lunch, I said my goodbyes and turned on the car. It’s outside thermometer (which is always accurate) read 108 degrees. I had to pour water on the steering wheel to make it cool enough to touch. I headed out of the city, watching the temperature gauge, thinking it’d go down now that the car wasn’t baking on pavement. I got on the Bronx-Queens Expressway. Overheated vehicles were in the breakdown lane, their owners squinting in the sun, waiting for help. My car’s outside thermometer read 109 (Fahrenheit, that’s 42.7 C.) I did not want to be in one of those stalled cars. It’s never relaxing driving out of NYC, but this time it was scary. Far out of the city, in Connecticut, the thermometer remained in the triple digits. I knew things were bad when I saw ten tractor trailers, pulled off and parked in shade on the side of I-84. I kept going. I texted my husband from the rest stops. How are the animals? Steve was home and doing all the right things. Everyone was fine- but it required effort and attention.

People often ask me about how chickens handle the cold here in New England. I always respond, it’s not freezing temps you have to worry about, but the heat. Chickens don’t die from snow, but they do die of heat stroke. However, they can handle high heat if you manage their housing right.

The HenCam coop doesn’t have cross-ventilation, so I’ve put in a box fan, facing the nesting boxes. Here’s Lulu, cooling her bottom in the fan’s breeze. 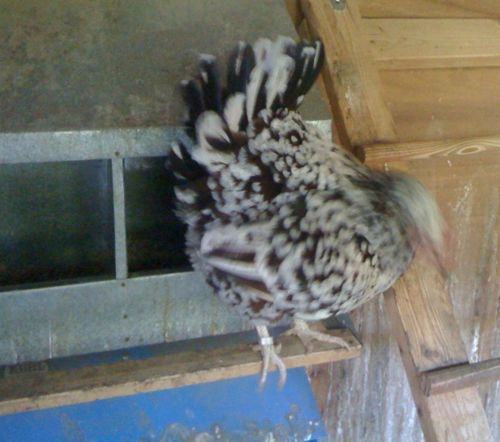 Coops should be sited so that some of the run is in the shade. Chickens will scratch out a depression in the dirt to lie in to stay cool. Of course, they need water. If the chickens are hunkered down in the shade, they won’t want to cross a hot, sunny dirt patch to get to water.  So, have a source of cool water nearby. One trick is to fill half the waterer, freeze it, and then top off with water before setting out. Or, simply fill with ice cubes and water.

If your coop is in the sun, you might want to hose it off. I know poultry people in Texas who keep a mister in the run during the hottest days of the summer. Evaporation lowers the air temperature, and the water keeps the dirt damp and cool.

Give your chickens plenty of leafy greens. Reduce the amount of scratch corn – which raises body temperature (good in the winter, bad in the heat.)

Heat-stressed chickens pant, and I think they have panicked looks in their eyes. If your hen goes limp, quickly get it somewhere cool. Immerse her in a tub of cool water. She might just survive. But, your best bet is preventative, by making sure there’s drinking water and damp dirt in the shade.

Rabbits suffer heat stroke, too. They’ll die suddenly, before you have a chance to help. When I saw the forecast for humid weather in the high-90’s, I set up a rabbit hutch indoors, and brought her in on Monday morning. Candy misses hopping around outside, but I think she’s enjoying the change of scenery. Candy will be back outside when this dangerous heatwave is over, which should be by Friday.

Meanwhile, the air conditioner in my son’s dorm room broke, but he’ll have to deal with that on his own.