Caper has been limping for two months. At first I thought that it was a stone bruise that would go away. Or maybe a muscle pull. After a few weeks of watching Caper limp, I had Dr. Sarah come out. Luckily for us, Dr. Sarah not only has a small animal practice, but she’s also married to a dairy farmer and knows livestock AND does house calls. Dr. Sarah wasn’t too concerned about Caper, she thought it might be a strained muscle and gave him a shot of banamine. Unfortunately, Caper continued to wave his right front foot in the air. Clearly he was saying, “ow, ow!” It was decided to do x-rays, which meant a trip to Dr. Sarah’s office.

The goats are twin brothers and have never been separated. They also haven’t been in a car since they were delivered here when they were babies. I wanted to make this trip as stress-free as possible, and so the minivan was turned into the goat van and Pip came along to keep his brother company. I introduced them to the back of the van using my target stick and treats. These are clicker-trained goats. They’ll follow the knobby end of that target stick just about anywhere. So, instead of tugging and pulling, I simply had them go towards the stick. Still, Steve had to pick the boys up and put them in the van. 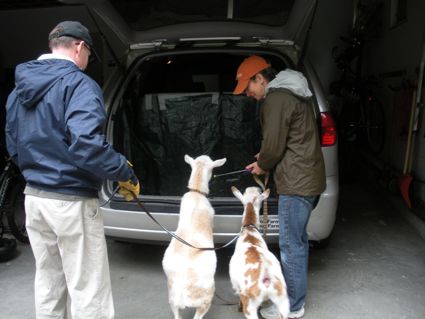 The ride was surprisingly uneventful. A bit of meh-mehing. They were so busy learning how to stand up in a moving vehicle, that they didn’t try to dismantle the back seat. The drive to the vet’s office is only 20 minutes. 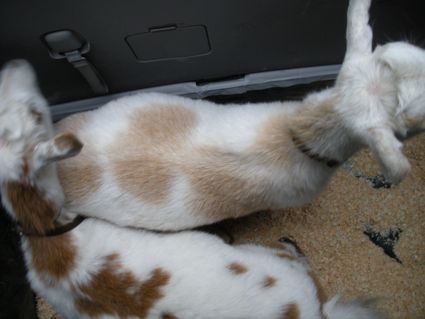 We waited outside. The boys decided to do some landscaping for Dr. Sarah. These branches needed trimming. 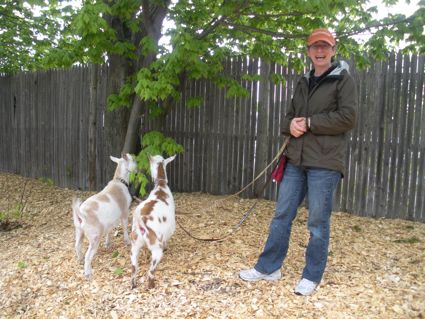 The boys noticed plants inside and offered to help trim them, too. We said no. 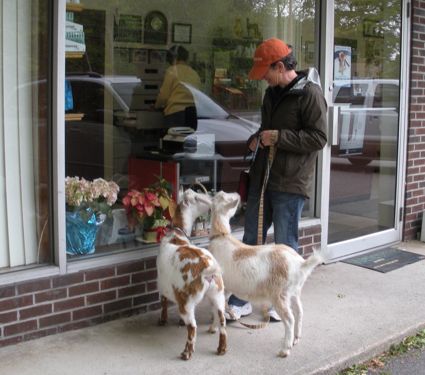 After a thorough exam, much prodding of shoulder muscles, and trotting back and forth across the parking lot, it was decided to x-ray Caper’s knee. The boys liked saying hello to the nice people in the waiting room. I goat-proofed the examination room (dangling IV tubes are a magnet for goats.) I also cleaned up. 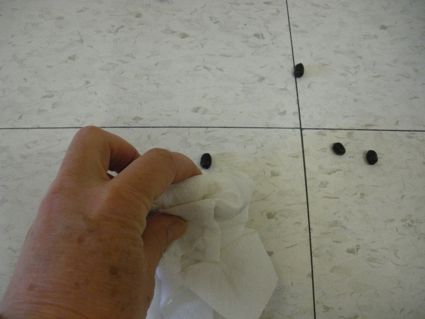 Caper had x-rays taken of both knees. Dr. Sarah doesn’t get to read many goat x-rays, so she compared the injured joint with Caper’s healthy one. 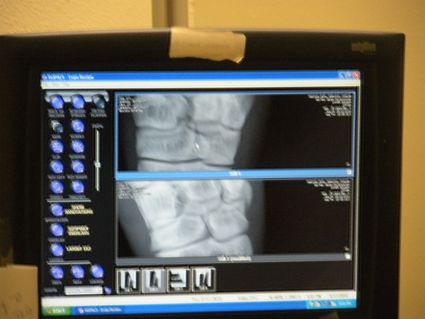 There appeared to be a slight bone chip in his right knee. No wonder Caper has been ouchy! The diagnosis doesn’t change how I care for Caper –  this will take time (and maybe a few aspirin) to heal. But, I am relieved to know what the problem is and to be reassured that I’m taking care of him as best I can.

In order to give a correct dose of aspirin, Caper needed to be weighed. Dr. Sarah picked Caper up and put him on the scale. Caper, being a goat, even a gimpy one, immediately hopped off. Instead of having to wrestle him still, I pulled out my target stick and treat bag. Caper politely stood on the scale. It registered 45 pounds. Big boy. 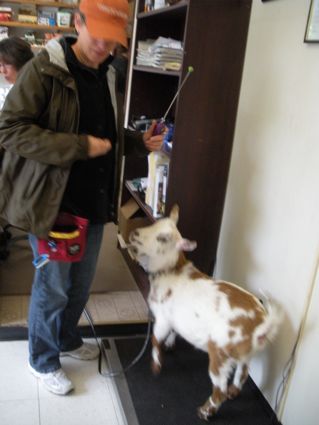 After saying enthusiastic good-byes to everyone, the goats got back into the goatvan. This time, there was lots of bleating and head butting. Finally, three miles from home, they laid down. 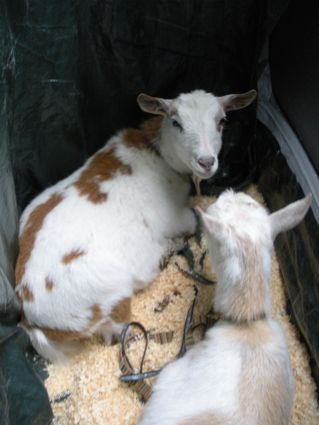 The trip to the vet was fun for the boys, expensive for me, and something I hope we won’t have a reason to repeat anytime soon. But, perhaps a road trip somewhere else is in the future?