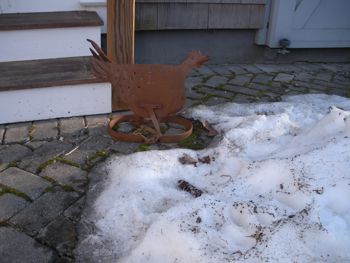 Although there’s still old snow in the shady areas, most of the yard and animal pens are looking end-of-winterish. There’s mud. There’s manure to rake up and dog messes that hid in the snow all winter that I need to pick up. Not a very attractive description – but, with the sun out and the weather in the 50’s, there’s a hit of green, which makes it beautiful.

It was a perfect day for a clean-up. While I mucked out the goats’ stalls and raked their yard, the hens had an outing. Here are Lulu and Buffy multi-tasking. They’re dust bathing and pecking for bugs at the same time. 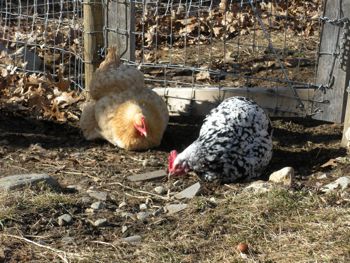 Candy had a romp in the goats’ yard, and had a snack on mint shoots. 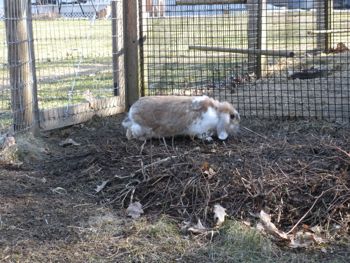 Meanwhile, the goats got in the way. They also got in the compost pile where I was dumping their old bedding. Hay that they had rejected in their stall, becomes appealing when it is somewhere they’re not usually allowed. 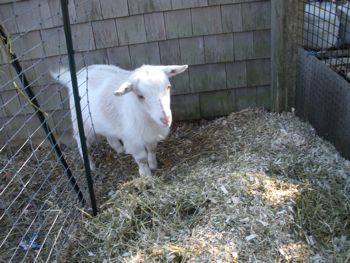 After giving the goats all new shavings and fluffing their hay, I did a spring cleaning in the HenCam coop. Cobwebs were brushed off the ceiling, the floor swept, even behind the food bins, and a messy catch-all shelf was cleared off and dusted. When I started sneezing and couldn’t stop, I decided that I’d done enough.

After showering and putting on animal hair and dust-free clothes, I decided to check my email. Just to take one more look at my hard work, I clicked on goatcam. What a sweet picture. There were Pip and Caper, lying down in their clean bedding, chewing their cuds. Then Caper tried to stand up. But, somehow, he was under the water bucket. He stood up anyway. The bucket tipped and the water poured out. I saw his ears swivel. What’s that water noise? I saw him thinking. Oh. My bed is soggy. The goatmaid should keep this place nicer. He carefully made his way out of the stall.

Back I went to the barn. I sopped up the two gallons of water with a towel. I shoveled wet bedding. I put new shavings down. Good-night boys, I said. Thank-you, they said. Can we have a bedtime snack?

I am off to the shower, again.