Lots going on here, so I thought I’d update you on the animals.

Eggers is looking better – she’s showing the two P’s that healthy chickens should have – perkiness and pooping. She’s eating just fine. In fact, she seems to be delighted to have a food dish and water all to herself. Some birds pine away for their friends when they are in isolation. Eggers doesn’t mind at all. However, she ‘s yet to lay an egg, and the other bantam White Leghorns her age are, so that has me concerned. Also, Eggers has to be on the antibiotics a few more days so she’ll stay inside awhile longer.

Meanwhile, Caper has been limping. There’s no swelling, no wound, no stone bruise, and his hooves are nicely trimmed. It’s worse in the morning when he first gets up, so it sure looks like a muscle pull. Caper is not the most agile goat. I wouldn’t be surprised if he twisted an ankle or yanked his leg on the hay manger. I’m not too concerned, but the lameness has persisted for two weeks. Dr. Sarah came to check him out yesterday. She agreed that she looked like a perfectly healthy, albeit limping, goat. She gave him a shot of banamine, which should relieve the pain of a muscle pull. So far, though, Caper doesn’t look any better. It’s a mystery.

The fish have come out of hibernation. The pond water is now 50 degrees, which means they need to be fed. Here is The Beast, my six-year old Koi. Looks like she had a fine winter under the big rock, doesn’t it? 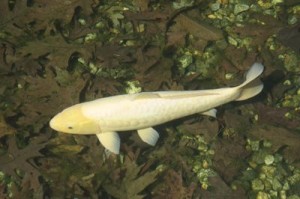 I saw the first toad of the season, and also the first mosquitos. Spring is definitely here.