First thing in the morning, we toss a handful of cracked corn into the chicken’s pen. In the winter we give the girls a little extra – it provides extra calories to keep them warm. Also, since they’re not out foraging in the dirt, the corn gives them something to scratch for. Scratching is an innate behavior and necessary for a hen’s well-being. Rabbits don’t scratch, but Candy joins the girls anyway. 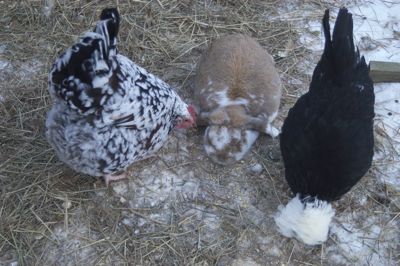 It’s not that Candy thinks she’s a hen – in fact, I’m convinced that she thinks that she’s far superior. But, like many animals, being part of a community is as essential to well-being as food and water. Candy enjoys being in the company of hens.