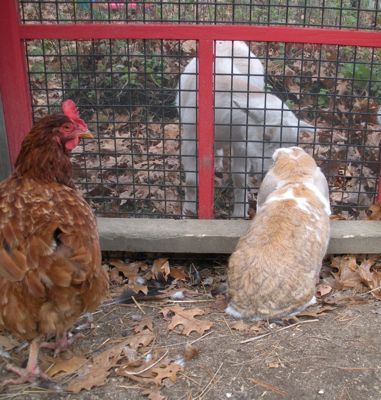 The bunny and the goat are friends. To get there, there’s been some sorting out to do. Goat friends butt heads. Rabbits don’t. The first time that Candy got to hop around the goat paddock, she went up to Pip. They pressed foreheads. This is a goat “hello” but not a way that rabbits greet. I was amazed to see Candy use this body language. Goat friends prance and bang heads. Rabbits don’t. Pip thought about it, then restrained himself. Remarkable for a goat who is better known for pushy exuberance.

Another thing that goats do, is they explore their world by taste. This is partly why they have a reputation for eating everything. If it’s there, if it’s interesting, it goes in their mouths. Not unlike human toddlers. Candy and Pip were next to each other. A quiet, companionable moment. Then Pip reached down, and nibbled Candy’s ear. Soon, a big part of the ear was in his mouth. The next moment, Candy was hanging in the air – Pip had picked her right up by the ear! This was NOT acceptable bunny behavior. Candy growled. Yes, rabbits growl. Pip dropped her. Candy shook herself and hopped away. Well, if goats play like that, I’m not interested. Pip was left, sticking his tongue out, trying to get the rabbit fur off. It was not a game either will repeat.

However, they still like to press heads and sniff noses.

If only world peace were so easy.