Not quite two weeks ago, I noticed that Eleanor, the Barred Rock, was limping. Sometimes hens sprain a muscle jumping off roosts. I didn’t worry about her. But the next day she was moving even more stiffly, so I picked her up and examined her. This is what I saw: 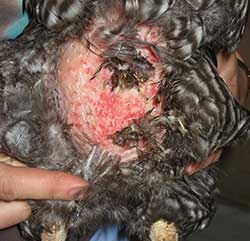 Her bottom was red, swollen, hot and had feather loss. I immediately put her in an isolation stall to keep the other hens from pecking at the red skin, and so that I could treat her. Also, a chicken’s droppings are the best way to diagnose what is wrong. Keeping her separate allowed me to check if she was passing anything and how healthy it looked.

Next, was to come up with a diagnosis. She didn’t have a mite or lice infestation, and although the skin was raw, she wasn’t pooping. I concluded that there was an internal problem. I slathered a lot of vaseline on a finger and felt inside her vent. I couldn’t find a stuck egg, however, my examination didn’t rule out an egg broken somewhere in the duct work. Luckily, Eleanor didn’t have maggots like poor Perrie (see the August 1 blog.)

Possibilities were an impaction, a broken egg, or something like cancer. The advice from knowledgeable chicken keepers was “cull her.” But, Eleanor’s eyes were bright. She didn’t look in pain. I decided to do what I could.

I soaked her in a warm epsom salt bath. The red skin stayed red, which confirmed to me that this was an internal problem.

I started her on a 10-day course of baytril, a powerful antibiotic (I had the pill form, which gives a more accurate dose than dissolving antibiotics in water and hoping that a sick hen is drinking enough.) Pry open the beak, place the pill as far back as possible and tickle the neck to make the hen swallow. Easy!

I used a plunger syringe that comes with infant medications to pour two tablespoons of my good, expensive extra virgin olive oil down her throat (I’m sure that cheap olive oil would work – but I don’t have any in my pantry!)  The oil is to help move things along, just in case she was egg bound or impacted.

The next day, Eleanor wasn’t eating and looked a tad worse. Perhaps she’d eaten something toxic? Or toxins were building up because her tract was blocked? Was she getting dehydrated from lack of water? I mixed a teaspoon of epsom salts (the cure-all for toxins) in a half cup of children’s pedialyte (electrolytes.) Unfortunately, the only pedialyte that I could find at the store was cherry-flavored. Which, it turns out, is very sticky and if it gets on your skin turns it bright red for a day. Next time, I’ll use latex gloves! Anyway, using that plunger syringe, I poured this mixture down her throat. Not as easy as the pill. What a mess. It was a beautiful day, so I let Eleanor out in the yard to free-range with the other hens. She was thankful for a dust bath and grass to eat (also good for internal upsets and the roughage helps to unblock impactions.)

All of this was effective! Later that day, Eleanor passed a huge, normal-looking poo. I fed her freeze-dried meal worms that I had on hand for the bluebird feeders. They are very high in protein, and easy for her to digest.

She missed her best friend, Edwina, so although Eleanor still limped and her skin was still pink (though not bright red) I put her back in with the other hens. Later that day, there was an egg in the nesting box that looked unlike any egg I’ve ever seen. It was dark brown (and I don’t have dark-brown egg layers) and had raised black specks on the shell. Was this Eleanor’s? Had she passed her stuck egg? Was this egg stuck behind a broken egg that had caused internal damage and an infection?

Eleanor continues to limp a bit, but I do think she’s going to live.  It’s so nice to have a happy ending to one of these stories.