It’s New Year’s Eve! I have much to look forward to in the coming year. I’ve been working on several projects that will come to fruition in 2013. Very, very soon I’ll have a store up on HenCam and you’ll see one of them! In April The Farmstead Egg Guide and Cookbook will be published by Houghton Mifflin Harcourt. I’ve written other books that are in my agent’s hands, and I’m hoping that she will be able to find a publisher for one or more of them. I’ve placed a chick order, and a box of 25 fluff balls will arrive the first week of April. Seven of the chicks will go to live in a coop at a nursing home that I’m consulting with. I have lectures and school visits scheduled (and time in my calendar to schedule more) and, of course, this blog to work on.

I am looking ahead, and have goals, and New Year’s resolutions, but try to keep them in perspective as I’ve learned that the small daily moments here at home are what fill my life with grace.

A very happy New Year to my HenCam friends! 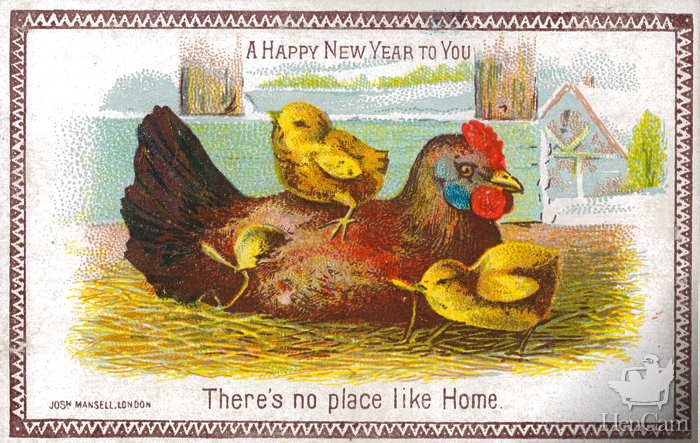 On Christmas Eve my college son flew from one coast to the other. My stepson and his wife of one year left their home in the western mountains and flew east. Steve and our high school son packed our bags and flew south. We all met on a magical island off of the coast of Florida, where the beaches are covered with shells, 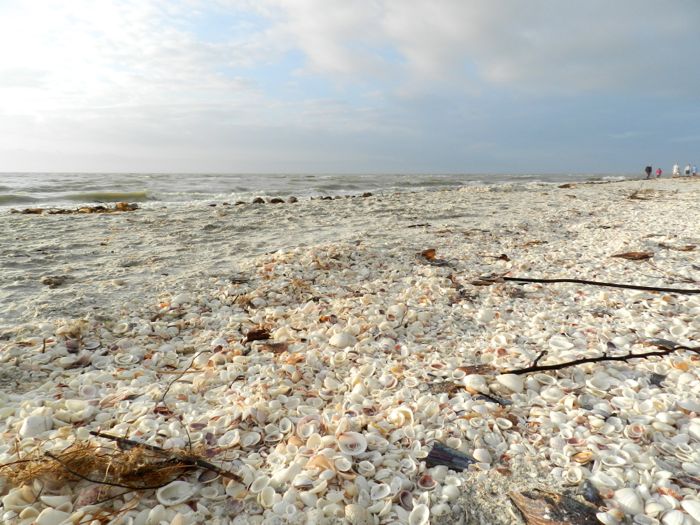 which are sifted over by both human collectors, 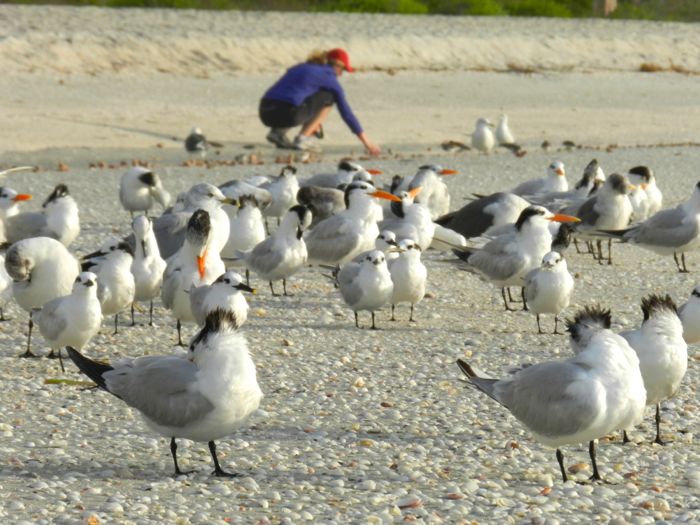 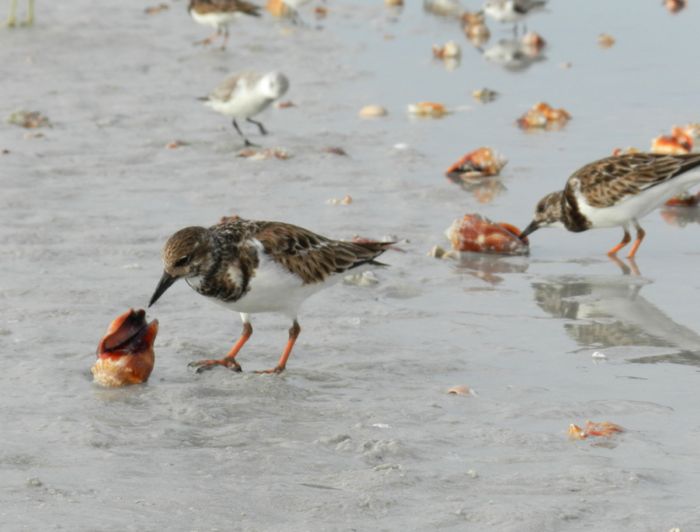 It is a place to slow down and take walks. One morning you might meet up with a Snowy Egret in the surf. 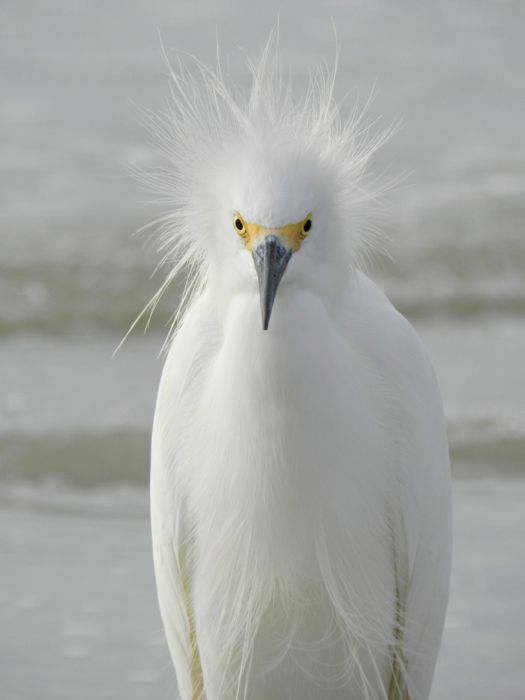 It is a place where you might look up to see a tree filled with Brown Pelicans, 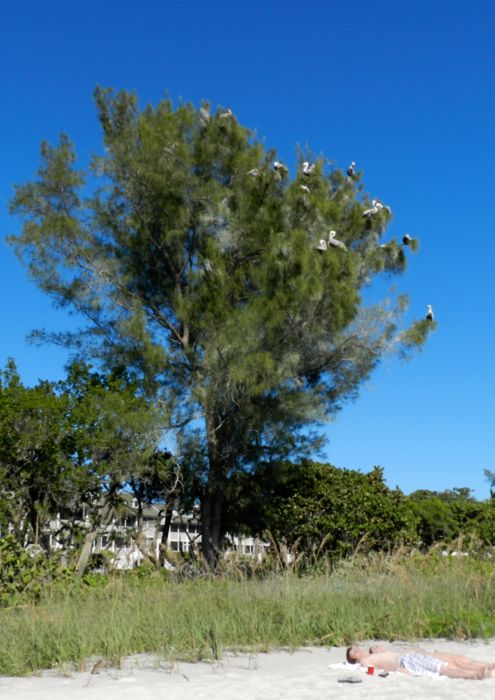 each huge bird improbably sleeping on a swaying end of a skinny branch. 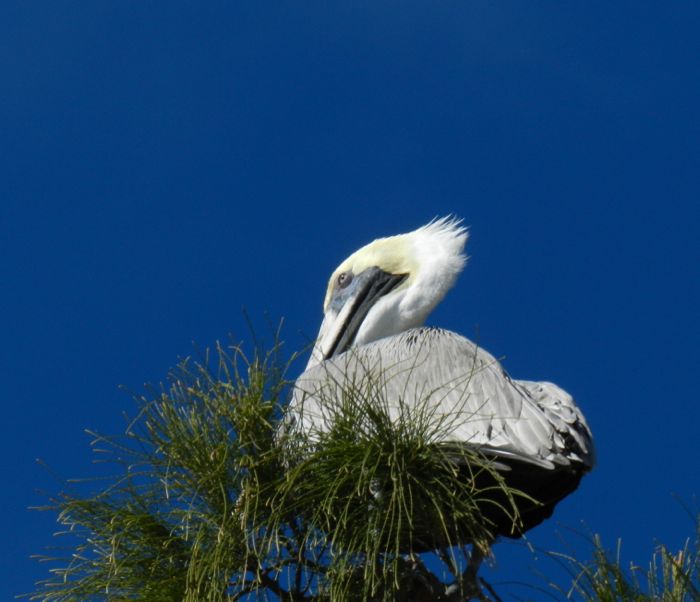 Take a walk at the Ding and you will see an alligator basking in still water. 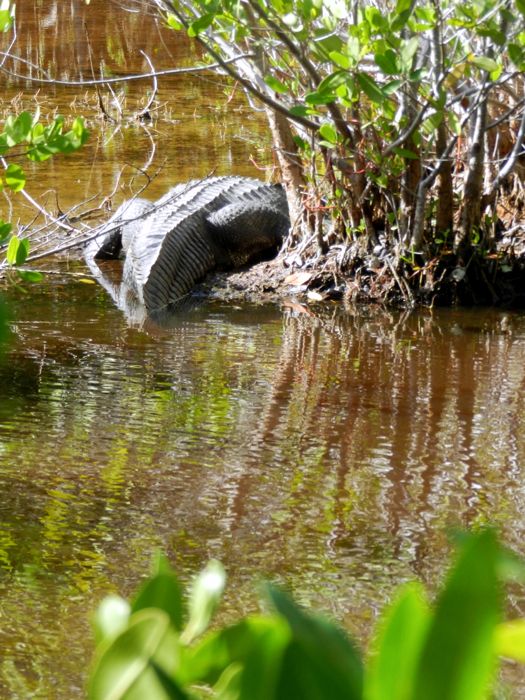 Take a drive to the Corkscrew Swamp Sanctuary and walk a couple of miles on a boardwalk through an otherworldly landscape. 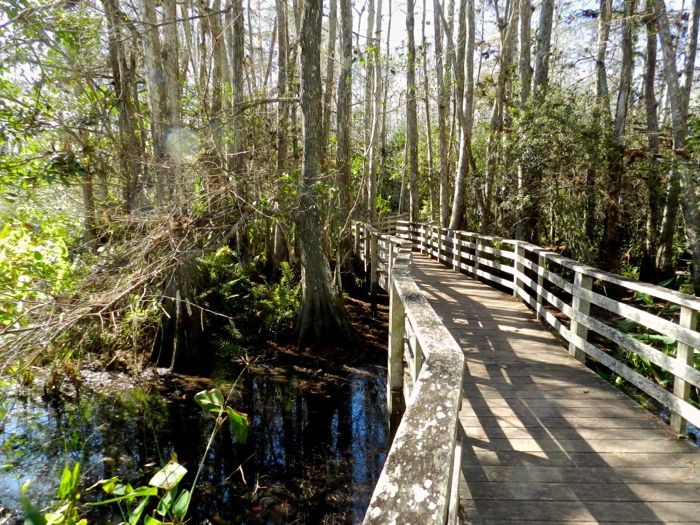 It’s a place to bring a book (in a waterproof and chic beach bag) and sit and read. It was chilly enough that I needed a sweater, but that was okay. I wore sandals! 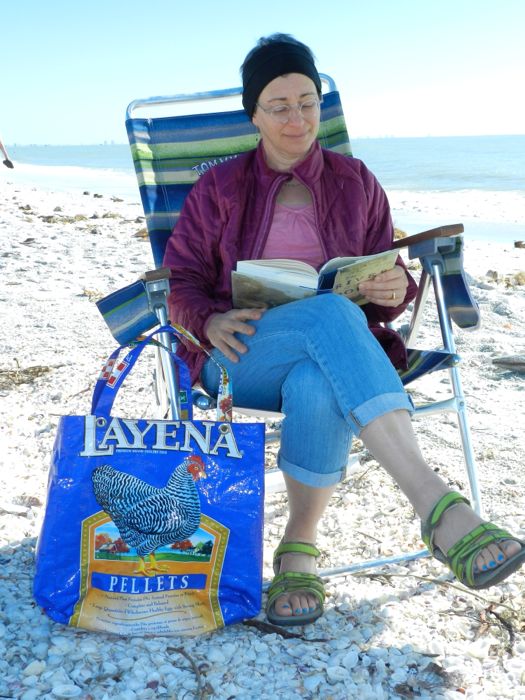 We’re back home, and my toes won’t be out in public for months, because this is what we woke to this morning. 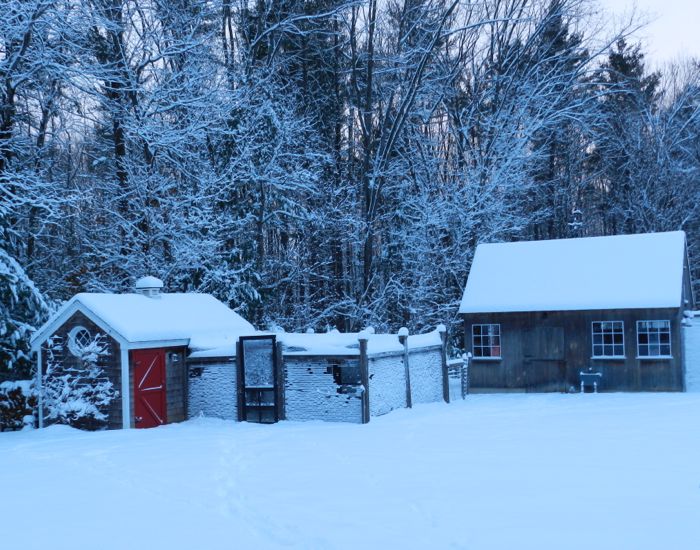 It’s beautiful, too, isn’t it?

For the last few months, I’ve been at my computer, writing. I’m going to take the week between Christmas and New Years to step away from the screen and spend time with family. No FaceBook. No blog posts. Limited email. I’ve taken books out of the library and I’m eager to read other people’s writing. My sons are off from school. No doubt there will be some cut throat games of Monopoly played this week.

We can’t see into the future. 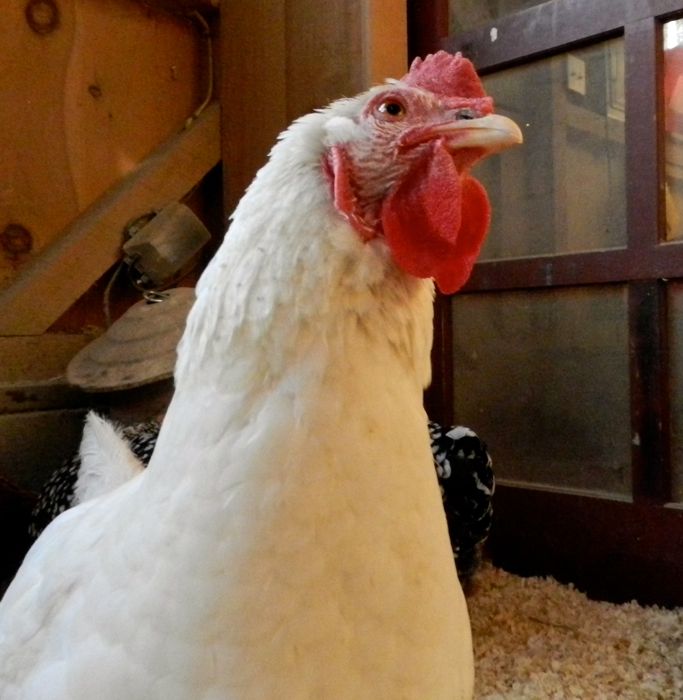 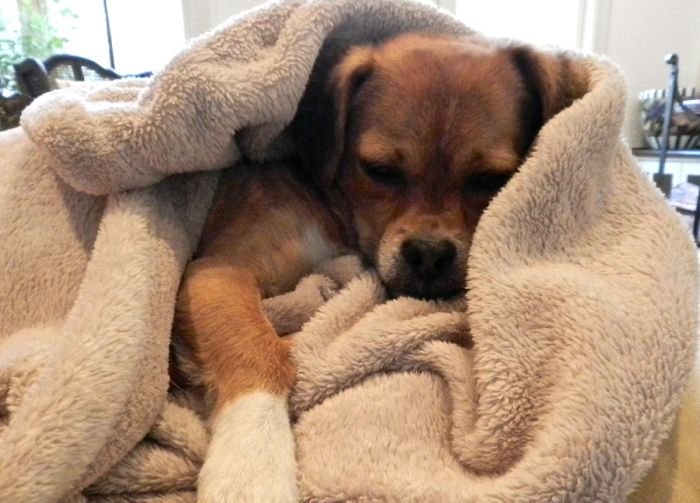 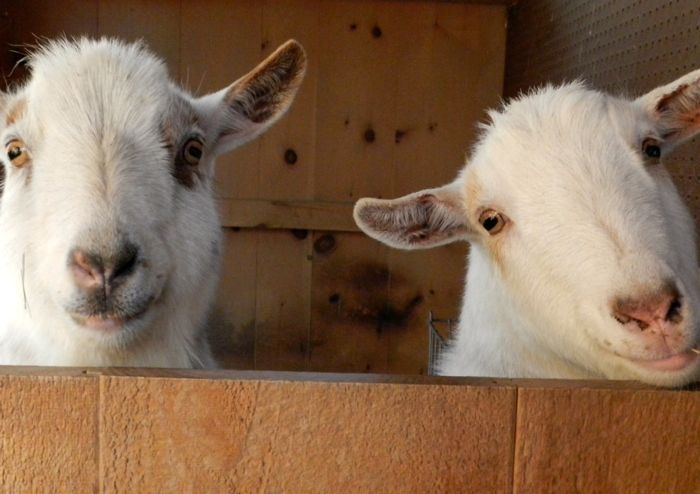 Have a wonderful week!

I remember reading, when I was very young, folktales about animals speaking at midnight on Christmas Eve. As a little girl, I’d wondered about that – about animals who normally sleep at night, staying awake to speak in English. For the sort of practical and literal-minded child that I was, it didn’t make sense. Certainly, it sounded wonderful for any human who happened to be in the barn at that moment, but who would? Besides, didn’t the animals already speak to each other in their own ways, in their own animal languages? Why speak human? Even when I was as young as five I didn’t think that animals had to speak in English in order to communicate. However, despite my puzzlement and skepticism, the thought of a cozy barnful of talking animals has stayed with me. I don’t remember any of the specific stories from my childhood, and so I’ve written one of my own that takes place on the winter solstice. Since today is the solstice (and a particularly dreary, dark and rainy one at that) I thought I’d share it here. It’s meant to be a picture book, but as I’m not an illustrator, you’ll have to use your imaginations. (The vintage cat drawing below is how I picture TomTom in the story to look.) 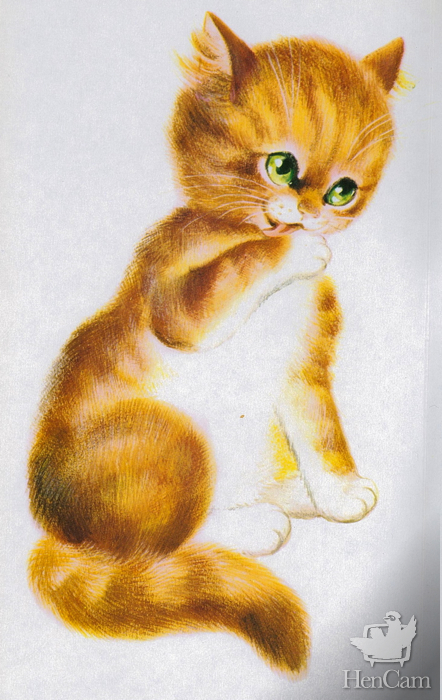 The Animals Talk: A Solstice Tale
by Terry Golson

Yes, yes, says Papa impatiently. It’s the solstice, the longest night of the year. All the more reason for you to get to bed!

Hannah Rose tries to sleep, but the stars shine brightly through her window. They make a sparkly path to the barn. She wraps her quilt around her and puts her feet into her slippers.

Hannah Rose tiptoes to the barn, slides the heavy door open a crack and steps inside.

Would you be so kind as to give us some corn? asks Ginger, the spotted hen, as she hops down off of the roost.

A tiny voice squeaks, Drop a little extra for me, please.

Tomtom the cat rubs against Hannah Rose’s legs. A scratch behind my ears would be nice, he says.

Brownie, the old mare shakes her head. Staying up late has made me hungry. A handful of oats in my bucket will do.

Hannah gets the corn for the chickens, the hay for the goat, scratches the cat and feeds the horse.

Thank you, says Brownie. I do like a midnight solstice snack. The horse sighs and lies down in the deep straw of her stall.

Warm up next to me, says Brownie.

Hannah Rose curls up next to the horse, pulling her quilt over her. She soon falls fast asleep.

Hannah Rose, says Papa, what are you doing here?

I heard the animals talk! she says, rubbing her eyes.

They wanted corn and oats and hay. Tomtom wanted a scratch and even the mouse asked for food, says Hannah Rose.

Hmmph, says Papa. That’s what they always want. I don’t need to stay up in the dark and cold to hear that.

Of course they did, says Papa. They always do. Each animal says thank you in its own way. Tomtom purrs when he’s happy. And haven’t you heard Brownie do that low nicker when she gets her food? Why, all of the animals thank us.

Time to get you some breakfast, says Papa. He picks up Hannah Rose and swings her onto his shoulders.

As she leaves the barn she hears TomTom purring, Brownie nicker and the chickens cluck. She waves good-bye, and as she turns to the house she hears the tiny squeak of a tiny mouse.

Chicken keeping in the suburbs is considered a trendy thing to do these days. But this “trend” is almost a hundred years old, as seen in this Lay or Bust Yearbook and Almanac from 1921. 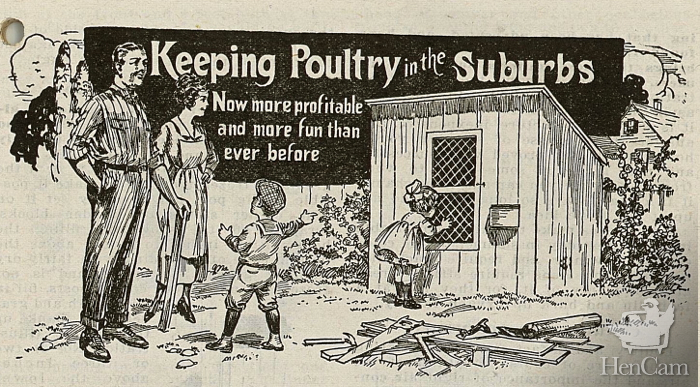 illustration from the Lay or Bust Yearbook, 1921
collection of Terry Golson, HenCam.com

This coop style remains a practical design, and books from that era give directions for how to build them out of piano crates.