I used to take care of a barn full of horses. I’ve worked in stables that were swept, mucked out and tidied. Tack gleamed. It was a full-time job. My chickens don’t need any of that, but old habits die hard. I use a fine-tined pitch fork to scoop out droppings. I take a broom to the cobwebs. I scrub the waterers clean. Since the coop is near my back door and right next to my neighbor’s driveway, these are good habits. Still, even an over-the-top caretaker like me puts only minutes a day into chicken care. It feels like a vacation compared to the horses.

Winter is a tad harder. Our outdoor spigots are turned off, so the waterers come inside into the laundry room to be filled, and it’s not fun to trudge through the snow with water dripping onto freezing hands. All animals need fresh water in the winter. The chickens have their water on a heater pad, so it never freezes. However, there’s no way to keep Candy’s water bottle from seizing up quickly in the cold. Luckily for her, all the bunny has to do is hop into the coop and drink from the chicken’s dispenser – something that she figured out all on her own. Clever bunny.

We had snow showers yesterday and this morning there is a hard frost on the ground. This is classic Thanksgiving weather here in New England. I love Thanksgiving – the crowd of people in the house, the smells of so many different food being cooked and that moment of thankfulness for all of it. But I don’t have a large family to have Thanksgiving with and so it is a small affair here at Little Pond Farm. I missed the abundance and craziness. I miss the cooking! So, several years ago I started my own Thanksgiving tradition- my Pie Party. The Sunday after Thanksgiving, when friends are traveling home, they stop here for pie. A lot of pie. Just pie. No leftovers. No bowls of chips and dips. Just pie. My house is full of the best smells of baking and the kitchen and dining room are filled with my dearest friends. AND I get my favorite part of the Thanksgiving feast.

Right now, I am deciding which pies to make. The only rule is no pumpkin! Currently, this is my list:

What are you going to bake?

It’s always a challenge introducing a pullet to an established flock. Because my chickens are different sizes, ages and breeds (and currently in different phases of molt), there’s a lot of jostling establishing pecking order. It’s not as easy as introducing the new hen and saying, “play nice girls.”

I have two flocks that live separately, except for when they roam the lawn together, and even then they don’t mingle much. The hens in the big barn are more assertive. In my experience, Barred Rocks and Wyandottes do not tolerate bantams, and that observation rang true this week. I let all of the hens into the yard and put Coco into the big barn’s fenced run. Alma got a glimmer in her eye, ran over and chest-banged the fence. Coco half-heartedly flapped back. Alma never settled. She did not want this newcomer in her space. The Barred Rocks also came over, fluffed up and challenged Coco. One pecked at Coco’s comb through the fence and drew blood. The big girls paced and did not relax their assertive stance. I knew from this that Coco would never be safe if I put her into the big barn to live (which had been my plan, since that barn has a lot more space.) So, instead, Ginger, who used to live with some of these hens in the big barn was switched over. I felt bad for her, kind of like when the teacher in school makes the good kid sit near the bullies, “to be a good influence.” Anyway, Ginger can hold her own, and didn’t even get a feather mussed in the transition.

Yesterday I put all the chickens out on the lawn again, but this time I put Coco in the Hencam barn run. I made sure that she knew what the inside of the barn looked like and where the roost was outside. This time it was Eggers (another little leghorn) who challenged Coco. They flew up and chest-butted each other through the fence, then lost interest. Alma caught sight of Coco and charged at the fence. Alma was so annoyed at this interloper that she attacked the only white hen she could get at – Betsy Ross. Alma pinned Betsy down and pecked at her head. She was not simply asserting pecking order. She would have killed her if I hadn’t intervened.

Today, I tried again. This time Eggers huffed up when she saw Coco in her run, but then decided that it was more interesting to scratch in the leaves. None of the big hens from the hencam barn cared about this third little white hen. Alma was off in another direction. Things looked good. So, one by one, I put the hencam girls back into their run. Eggers chased Coco, but not aggressively. Marge tried to pin Coco down, but I shoved the big brown hen away and she lost interest. Coco, not used to flock dynamics (having been a show bird) quickly learned to watch for body language and avoid birds bent on telling her that she is lowest in the pecking order. That status seems fine to Coco. She’s enjoying the pumpkin, curious about the bunny, and investigating this wider world that she’s been dropped into.

Yesterday was warm and sunny. I decided to give Candy a treat of rutabaga tops, pulled fresh from my garden. Candy was in her hutch, where she likes to sun-bathe. Usually, even if Candy is relaxing, she looks up when I come near. Rabbits are prey animals. Even a confident and safe bunny like Candy stays on the alert. I stepped into the run and the hens all got excited and noisy. (Out? they said. Corn? Leftover spaghetti?) Candy didn’t move. Now I was concerned. She was lying on her side, all four feet and part of her belly showing. Not normal. Her legs and nose were twitching. Had she had a stroke? I called her name. No response! I tickled her nose with the rutabaga leaves. Her eyes squinted open. She jumped up, shook herself, and glared at me. I had woken her up from a very fine, deep nap and obviously good dreams. I apologized and showed her the rutabaga leaves. Oh! she said. I like to think that Candy forgave me. Certainly she ate all up the greens quickly enough.

Who knew that rabbits dream like dogs, legs running in imaginary adventures?

I have a new Bantam White Leghorn! She has been named Coco – short for Coconut. Right now she is as white as freshly flaked coconut, but soon, in with the backyard birds, she’ll bathe in the dirt and be brown like the outside of a coconut.

I’ve been looking for another hen that not only had the same physical exterior, but also that same look in the eye as my beloved Snowball. There were more than a dozen little white pullets at the poultry show yesterday: 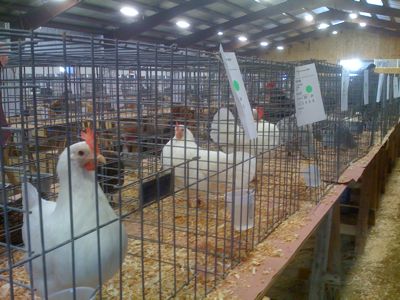 See the pullet in the first cage? That’s Coco. She won a blue ribbon, but her owner, Brandon, very nicely agreed to sell her to me (I was very persistent!)

Here is Brandon with Coco: 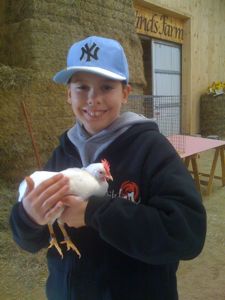 So, thank you Brandon, and also your grandfather, Don, who breeds these gorgeous chickens.

If you are thinking of getting into poultry, go to a show! You’ll get great advice, meet good people and probably fall in love with a breed you weren’t even thinking about. You’ll also be supporting folks like Brandon and Don. “Local Agriculture” is a buzz phrase these days, but poultry shows are the real thing. If you are in the eastern US, then the next big show is the Northeast Poultry Congress , in Springfield, MA, January 18-19. I’ll be there. I might even find a few more hens to bring home.