Although you don’t see him on the cams, Tonka is as much a part of my life as the animals that you watch here at HenCam. In fact, I spend more time with him that anyone else in the family. My sons (one home from college, one in high school) assume that if they don’t see me around the house, that “mom’s at the barn.”

There’s all sorts of theories about why women love horses. I’ve heard people go on and on about how women get a power rush from being able to control a large beast, and that there’s an undercurrent of sexual connotations. I don’t buy it. It’s also not just about having an animal to talk to – for that people have dogs. I became smitten with horses as a toddler and that love has never ebbed. I’ve put a lot of thought into why that is.

Horse are domestic animals. They’ve been working alongside people for thousands of years. They relate to us. They communicate with us. That’s true of other domestic animals, from dogs to chickens, but, with horses it’s at another level. Because we ride them, we can communicate instantaneously through our bodies. So, for example, not only do I know what Tonka is looking at because I can see his head turn, and his ears flick, but I can feel it, too. Conversely, that goes for him as well. He knows where I’m looking. He feels if I’m tense. If I shift my weight from one hip bone to the other, he senses it, and, with training, will adjust what he does accordingly. Ride with enough quiet and tact, and you feel each other breathe. Go out into the world on your horse, and you see the landscape together. You can’t do that with any other animal.

There’s this theory out there about how, because horses are prey animals, (big carnivores want to eat them) that they relate to humans as if we are predators and are a threat to them. “Natural horsemanship” bases a lot of their training on this premise. I think it’s totally wrong. Horses are smart enough to know that we’re not going to hunt them. We might scare them once in awhile (and they might scare us) but it’s not a predator/prey relationship. My horse knows I’m not a mountain lion. If I trained him as if I were, I’d be causing a lot of problems between us. There’s also this idea that, because horses are herd animals, and that the herd has a hierarchy, that we humans have to take the dominant position in the group. I don’t agree with that, either. First of all, horses know that we’re not horses. They don’t expect us to be part of their herd. Secondly, there’s a lot of misunderstanding with what “dominance,” and “leadership” is. Just thinking that you have to be “dominant” makes you behave in a way that sets up conflict. That doesn’t mean that I don’t maintain a relationship that asks for and requires appropriate and safe behavior from my horse; it does meant that I don’t rely on aversive training techniques to have that relationship. Horses are social animals and develop long-lasting and deep friendships over time. That’s the key. That’s what I aim for.

On the other hand, even though I don’t have to act like a horse to train Tonka, it does help, in our relationship, to be aware of what horses respond to. They’re hyperaware of movement, and so being calm and predictable is something that I try to do. They respond to body language and so I am aware of where I place myself in relation to my horse. They vocalize rarely, but when they do, it means something, and so I try not to chatter, but I do use my voice, when I have something to say.

The relationship with my horse fascinates me and enriches my life. But there’s something else about horses. Beauty. Especially in movement.

Of the three horse gaits, walk, trot and canter, two of them have moments when all four feet are off of the ground.

Here is Tonka at the trot. 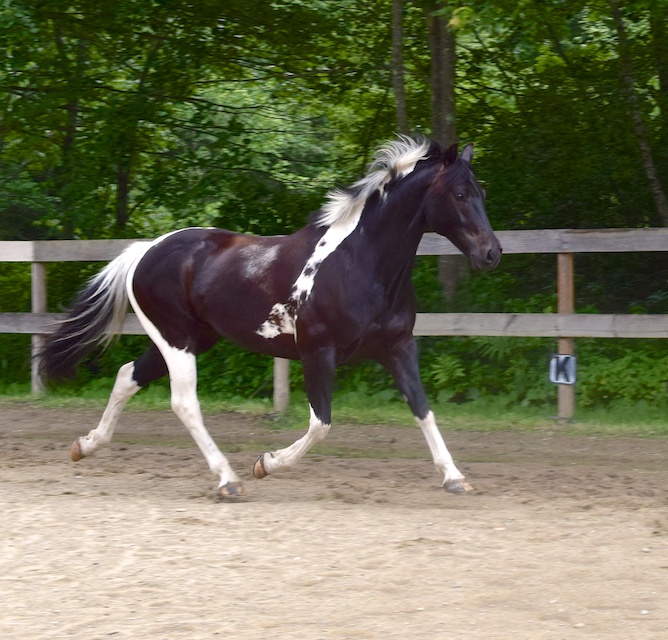 This is the canter. 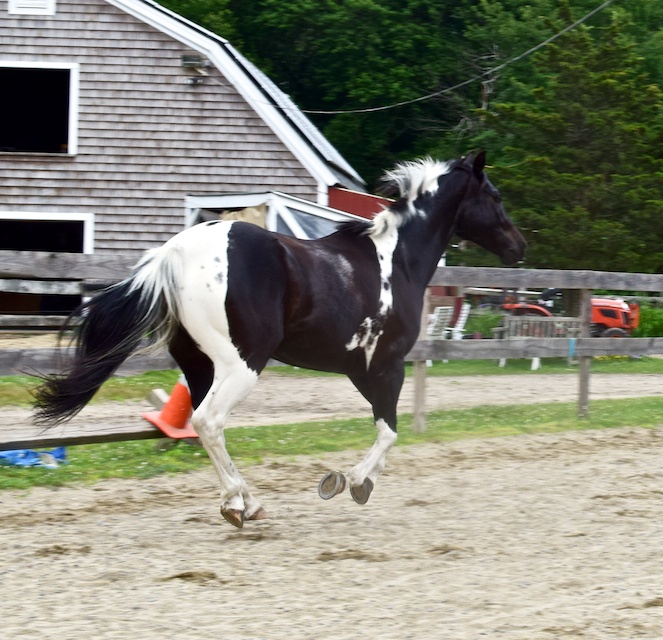 How amazing is it that I can put a saddle and bridle on this horse, and he’ll do that when I’m on his back? That I can take flight with  him?

That said, it’s not the rush of galloping that makes me so happy around horses. We can be standing still, like we are in the photo below. Actually, look closely at it. We’re not still at all. Tonka has one ear towards the camera, and one ear back to listen to me. My legs are on his sides and I can feel that he’s relaxed, but also ready to move off. He’s waiting for me to tell him what’s next.

And so the conversation continues. What’s next, Tonka? 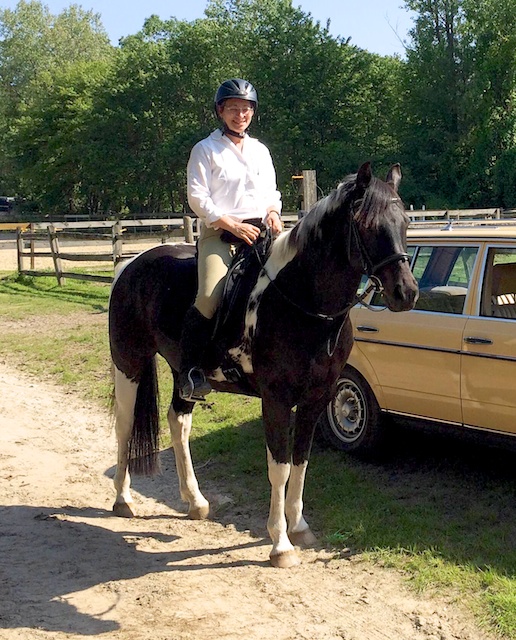