Within a day of a chick hatching she is ready to search for food, to explore, and to interact with others. Unfortunately, a typical brooder is a boring place. There’s nothing to peck at except for uninteresting crumbles and the other chicks. In a perfect world, the chicks would be able to go outside and scratch up bugs in the dirt, eat greens in the yard, and try little bits of this and that. But, that’s not usually possible. Chicks need to be kept in a safe and warm enclosure. We’ve had a very cold spring. Yesterday it was drizzly and didn’t warm up past 40 degrees F. There’s no way that my chicks could go outside. Also, the first week or two, it’s best to keep them on clean ground where they won’t be exposed to coccidia and respiratory diseases. That’s why they stay in the brooder.

Chicks will grow okay if fed only crumbles. But, from the get go they’re omnivores, and a varied diet will do them good. That doesn’t mean that you should give them piles of treats. Although chicks are designed to eat continuously (except for when they’re napping) they are gluttons. Give them an easy to chow down on food and they’ll overeat; depending on what you feed, it could be like letting a toddler eat only Lucky Charms cereal.

You might have read that you can chop up vegetables and bread into fine bits and feed this as treats to your chicks. I disagree. Chicks don’t need their treats minced. By day four a chick can swallow a whole worm with no problem (and digest it easily thanks to grit.) Besides, I want my chicks to be kept busy by their treats, which should take time and effort to consume. Also, the treats must be nutritious. Chicks require a higher protein content than adult hens. Bread and corn won’t provide that. On the other hand, don’t feed dried mealworms, as a few too many can lead to kidney disease.

The first week I give the chicks a small clod of dirt with a clump of clover attached. This is better than grass, which has long blades that can get impacted in the crop. The chicks peck and eat bits of green and they even find bugs to eat. You might see a chase and tug of war when a worm has been found. They’ll scratch at the dirt. Scratching is another innate behavior that chicks are preprogrammed to do. Giving them an outlet for this is important to their well-being. You’ll hear much excited and happy chirping. 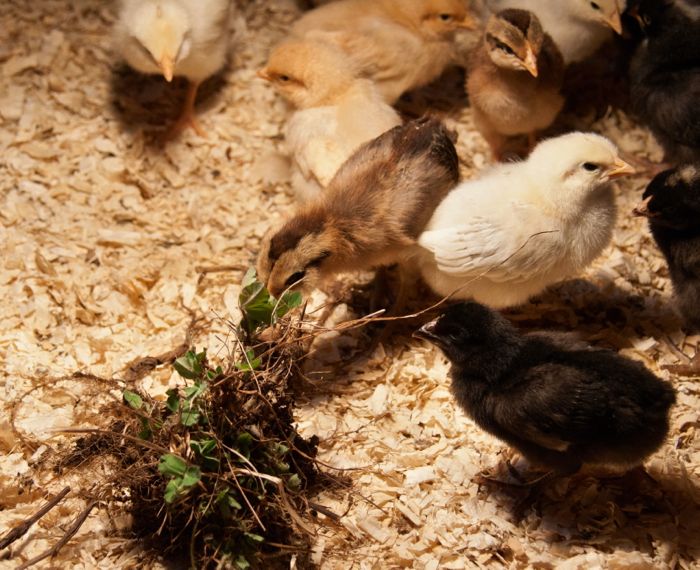 Dandelions are also good treats for the youngest chicks. At first they’ll eye this new thing, but in no time at all they’ll be all over it. 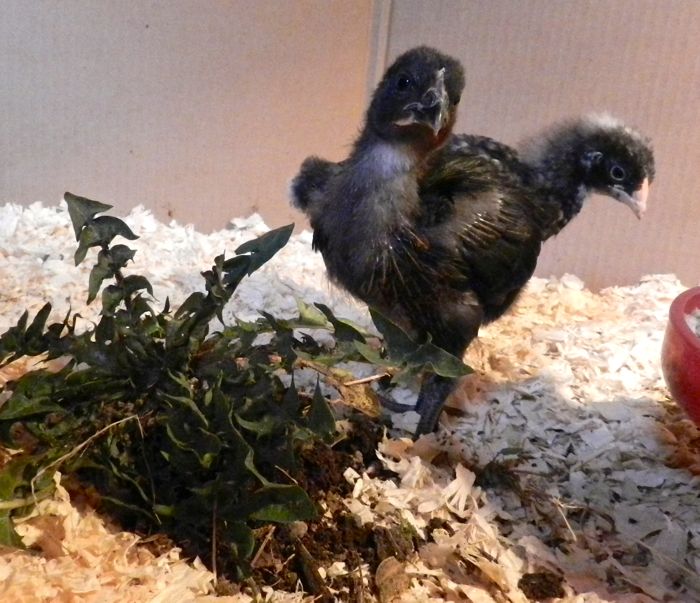 If nothing is growing, or just for a change, give them a vegetable to work at. They’ll peck at it and not at each other. Win-win! 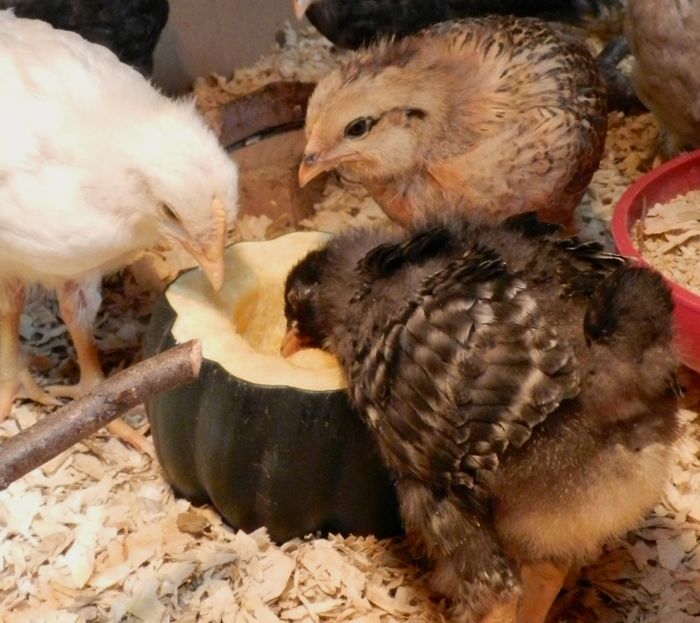 As the chicks get older, you can continue to offer clover. 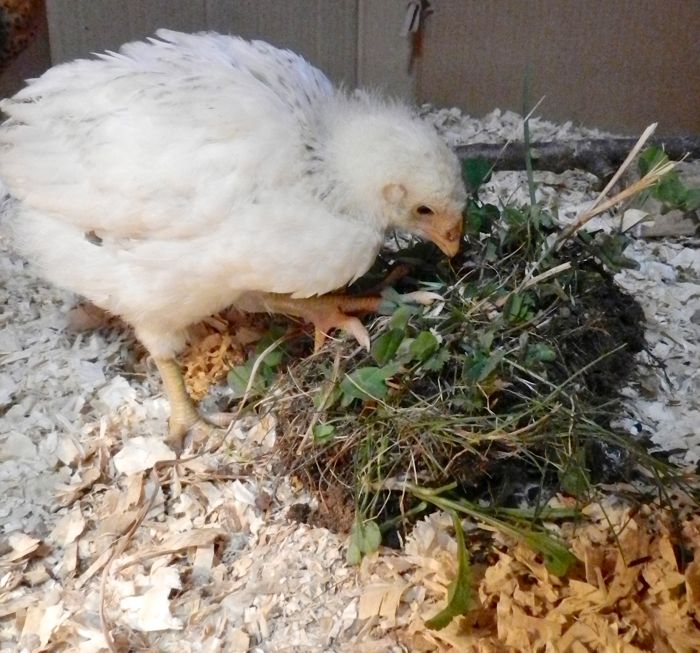 You can also give them a clod with short blades of grass attached. 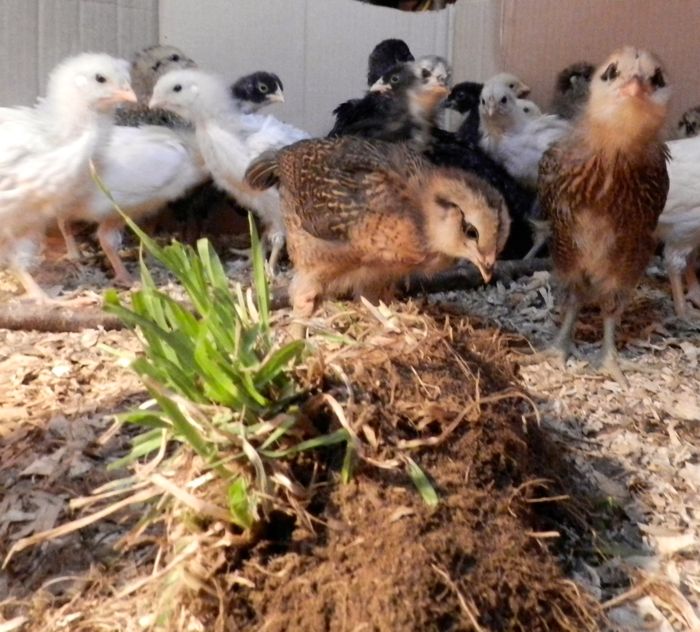 An added benefit is that once the greens and the bugs are eaten up, there will be dirt for them to take a dirt bath in. Your chicks will know how to do that their first week, too!

In no time at all they’ll grow up. But, they’ll never stop eating their greens. 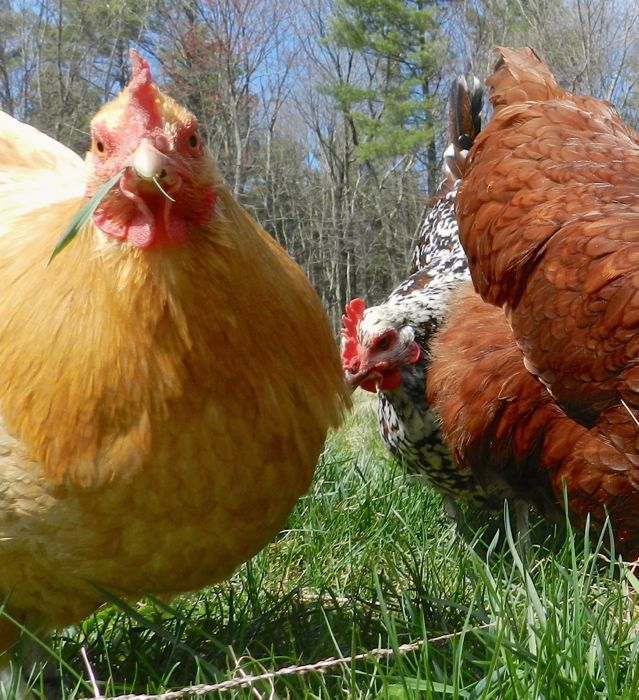