As many of you know, I had a cochlear implant implanted on December 17. My surgeon says that I had a tougher recovery than 90% of her patients. More pain, more of a reaction to the anesthesia, and more weird side-effects. But that’s over with! (Well, almost.)

On January 10 the device was turned on, and, as expected, voices sounded like they went through one of those machines that a criminal might use to leave a ransom message. It takes awhile for the brain to make sense of these new pathways for aural inputs. Already, after only two weeks, voices are sounding more normal. Voices continue to have a metallic echo, but already I have more clarity than I had with my hearing aids.

For thirty years I have dealt with being hard of hearing, and with the anger, frustration, grieving, and acceptance, that comes with a disability. Because my loss is progressive, I went through that emotional cycle over and over. I’d learn to cope, and then have the rug pulled out from under me and have to go through it all over again. The CI has stopped that. I know my baseline. If I never hear better than I am hearing now, it’s okay, because I know it will never get worse. Just that has changed my world. The icing on the cake is that my hearing is getting better.  It’s likely that my hearing will improve not just over the next few weeks, but over the next year or more. Amazing.

From the start, human voices, although weird, were understandable. It was another story with my animals. The first time I heard Lily bark I thought that the fire alarm went off! Walking down my hallway, I wondered what a loud tick-tick-tick was. I turned around and discovered that Lily’s nails make a lot of noise when she trots behind me. I’m enjoying the chickens’ chortles and clucks (I wasn’t deaf, so I had heard them, but now I’m hearing their fuller musical range.) Surprisingly, the goats don’t sound much different than they did before. But, now that I can hear noises from a greater distance, I’ve found out that Caper bleats when I leave the barn to go back to the house. I didn’t know. Sweet. 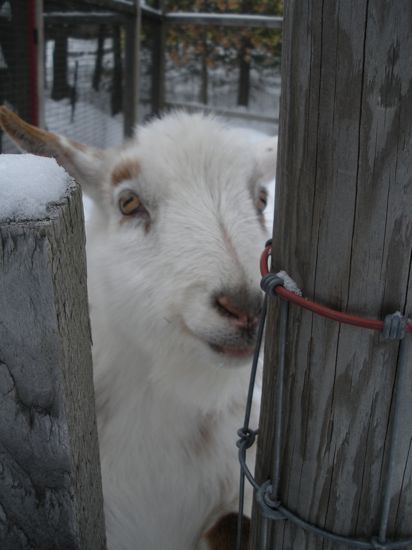