I’m lucky to live in a corner of New England that has historic buildings, dating from the Colonial Period of the 1700’s and into the 1800’s. A mile from my home is a house that was built in the 1750’s. Somehow, the property lines have stayed intact since then. Stone walls still mark the border between hay fields and woods. Of course, the landscape has changed over the years. The road is now black pavement and much closer to the front door than the original dirt tract. Powerlines bisect the view. But not all change is bad – the trees that were planted 200 years ago are now full-blown beauties. One of them is a Red Buckeye that reaches thirty feet. Although tree guides say that the Red Buckeye is a native of the southeast, and is more shrub than tree, this one proves otherwise. The tree is not easy to find at local nurseries, but my landscaper, Mark, found one and planted it a couple of years ago in my front yard. 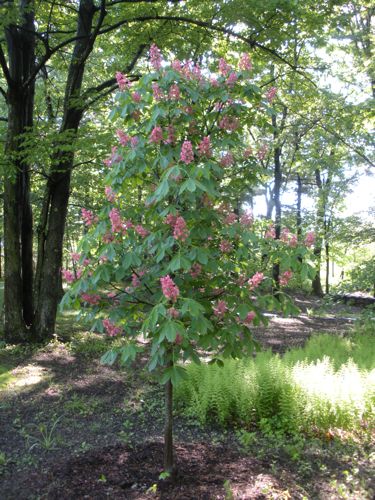 Those pinky-red bottlebrush blooms are why I wanted this tree. It’s old-fashioned, yet dramatic. 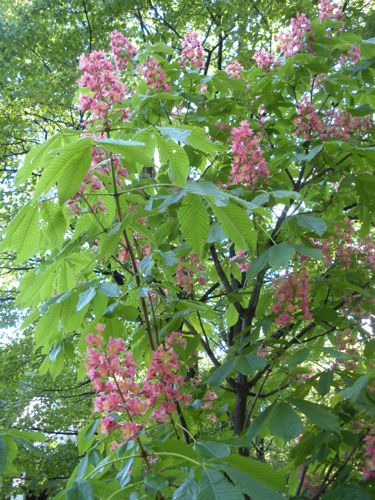 I took these photos early this morning, after a heavy rain. When the sunlight reaches the tree in another hour, it will be covered with buzzing bees. 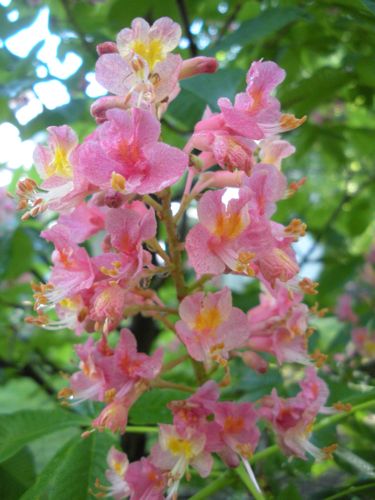 Pollinators, especially honeybees, are in decline. Many showy plants at garden centers look pretty, but are like candy – they have no nutritive value. Last year I went on a garden tour in a neighboring town. One of the gardens was in a newer development. I walked around the block and felt uneasy. Something was amiss, but I couldn’t figure out what it was. The next garden was at an older home, and bordered wetlands. At that garden there was birdsong and insect noises. It sounded alive. I realized that as pretty as the homes were in that new development, that it was deadly quiet there. Hopefully, some of the residents will plant Red Buckeyes.

(There’s a new book for children about the crisis with honeybees, The Hive Detectives. It should be in every school library.)