Alma looks no better. She doesn’t look worse. One reason to keep her in a crate is to keep tabs on how much she eats and drinks. She hasn’t touched her food. That’s not good. Alma isn’t defecating and/or laying. If you leave a chicken in with the flock, you don’t know this most important diagnostic information.

It’s rare that when a chicken is ill that you know the exact cause. You could call a county or state vet to have blood tests done to detect bacteria and viruses. But, usually they’re not interested unless the chicken has dropped dead. Few people have access to avian vets, and few avian vets know anything about chickens. But, really, it doesn’t matter the exact cause since the treatment is usually the same.

Yesterday I started Alma on a dose of antibiotics in her water. This is the easiest way to administer the drugs, especially if you are treating an entire flock (which I’m not.) If the hen has a bacterial infection, this usually cures them. Since Alma isn’t drinking, I’m thinking of switching to a pill form.

Meanwhile, the next step I apply to all lethargic, not-eating, not-pooping hens it to dose with olive oil. I use a syringe that came with infant’s cough medicine. 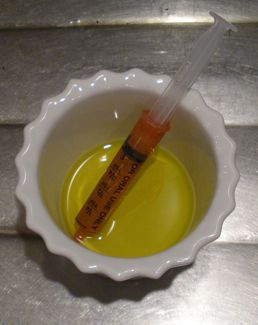 Secure the hen under one arm, and with the other hand, open her beak and squirt the oil down. Don’t wear nice clothes. Have paper towels handy. If the hen is ailing because of a blockage, the olive oil will help. Since Alma shows no signs of respiratory distress, an impacted intestinal tract might be the issue. Or, she might have something serious, like cancer or liver disease, which is not uncommon in older hens. The only way to know is after the fact, with an autopsy.

I’ll let you know if the olive oil trick works (the result will be obvious!) and if not, what’s next.