I’m pleased as punch (do my overseas readers use that expression?) because HenCam has been selected as a Top Ten Cam by EarthCam!

EarthCam has an international audience, and I’ve already heard from new viewers in Italy and London.

Not only did I get this news on Mother’s Day, but I also got the sweetest present from my husband – he bought me the domain name goatcam.com, and as soon as the babies are old enough to come home (about the end of June), the goatcam will be up and running. Here’s a teaser for what you’ll be seeing: 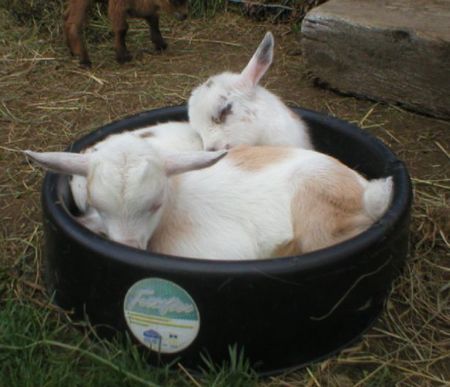 I’ve also been getting accolades on Tillie Lays an Egg. The book got a starred review in Publishers Weekly, and also great reviews in Kirkus, The Wall Street Journal, The LA Times and The School Library Journal. Blogging book reviewers have also been writing favorably about Tillie.

Everyone needs a pat on the back now and then (that’s another expression that I wonder if it translates to other cultures,) and I can tell you that writers especially need external validation. Being a writer requires self-editing, outside critiques, long spaces of time when no one is interested in what you are doing, a lot of internal one-sided conversations, self-doubt, and a willingness to be judged in public by others.

But, being a writer also means that once in awhile you get it right. In the case of a happy picture book like Tillie Lays an Egg, it’s been like I’m in a roomful of friends, and we’re all laughing and talking about the same joke. It’s been more fun than I can shake a stick at (an expression I’m sure is regional but I’m sure you get the gist!)

I’ve tentatively named the goats Pip and Caper. I’ve a feeling that we’re all going to be enjoying a few of their jokes soon.