An average large laying hen eats 1/4 pound of feed a day, drinks about 4 ounces of water and produces 1/4 pound of manure. Chickens, like other birds, don’t pee; it all comes out in one, fairly solid, glob. Chicken poo is smelly, but a well-cared for coop and yard is not. The trick is to keep it picked up and compost the waste.

I’m rather lazy about my compost. I don’t bother to add water, or microbes, or turn it. I let the chickens and time do the work. I have a three-step system. Kitchen scraps, garden refuse and weeds go into a section of the chicken run. 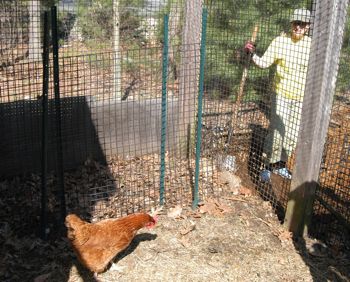 You can see it here – this view is in the HenCam yard. It’s around the corner to the side of the coop and out of sight of the HenCam camera. Notice that there’s a piece of fencing in the yard. The materials to be composted get tossed behind it. The chickens can get in – there’s a foot opening on both sides, but because of the fence, despite the girls’ active scratching, the material stays in that corner. I don’t bother to chop up the stuff that goes into the compost – the chickens do that work for me. I don’t have to turn it, either. They do all of that work, too. In this photo I’m standing outside of the chicken run, in the next stage of the compost. Once the chickens eat what they want, and shred the rest, I shovel it into this next bin. Here I add the manure and shavings that are cleaned out of the coops. I also put in kitchen scraps that I don’t want the chickens to get – like coffee grounds and moldy strawberries. 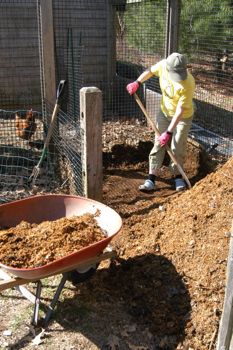 These two bins outside of the chicken run are fenced to keep the material in and the dogs and chickens out. The one that I’m standing in was filled over the course of a year. In the spring, I shovel the old compost from one side to another. I’m almost done here! The really good stuff at the bottom goes into the wheelbarrow and is taken to the garden. The rest of it gets to age a little longer, and in June is used for my pumpkin patch. It always looks like a lot, but it is never enough.

Now that the left side is shoveled out, I’ll be starting a new bunch of compost.

Look how lovely, fluffy and dark the compost is in the wheelbarrow. There’s no stinky odor. Here I am, spreading it under my Fox River Birch. Isn’t that the prettiest bark? 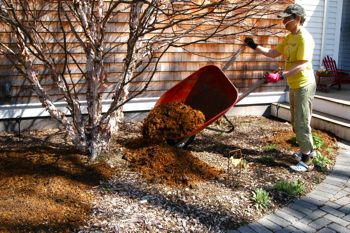 BTW, did you notice the yellow tee-shirt I’m wearing? It’s my Chick It Out tee from the Chicago Ridge Public Library. Read about what they are doing this month to celebrate all things chicken and how Tillie Lays an Egg inspired them, in this article in the School Library Journal.