I ruined a pie with my hens’ good eggs. For his birthday, my husband, Steve, asked for pie. I didn’t have on hand the can of evaporated skim milk that I usually put in my pumpkin pie, so I pulled out a recipe from an old Mennonite cookbook that needed exactly what I had in the pantry – pureed pumpkin and eggs.

The recipe read rather like a chiffon pie – the eggs are separated and the whites whipped until firm and then stirred back in. A nice, light pie, I thought. Very light, I thought, as I folded the mass of egg whites in.

I was surprised to see that the directions called for an unbaked crust and an initial oven temperature of 425 for 10 minutes, then only another 20 minutes at 350. I did as told. The top of the pie browned, the crust, however did not, and the center was jiggly. Twenty minutes of further cooking brought the interior to a better consistency, but not perfect.

However, the pie tasted wonderful, and we have eaten it all up. Still, what went wrong? The old expression, do as I say, not as I do, applies here. In my Farmstead Egg Cookbook I write about how eggs from backyard flocks come in various sizes and that for baking recipes, one should weigh them first. I didn’t. I since have. It turns out that what looks normal to me these days are jumbo eggs. Huge. Duck sized. Who knew that Alma was laying eggs that top the scales at 2 3/4 ounces? And that no one was laying a medium egg, or even a standard large 2 ounce egg? I’ll spare you the math, but with three eggs in that pie, I used 40% more eggs than the recipe called for.

Next time, I’ll weigh my eggs first. Steve says that I just need to make a bigger pie.

The egg on the left is the only 2 ounce egg in the carton. Buffy laid it. The one on the right is the 2 3/4 egg from Alma. 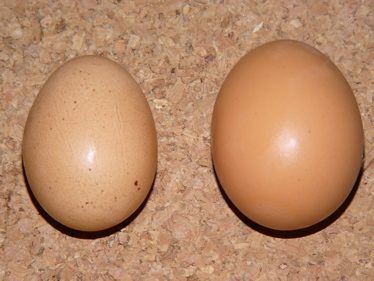