Snowball laid an egg today! She is my only bantam hen, and the only one who lays white eggs. Here is a photo: 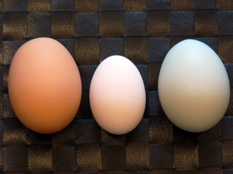 The large, roundish one on the left was laid by the Buff Orpingtons, Buffy. The one in the middle is, of course, Snowball’s, (it’s whiter than it looks in this photo) and the blue one on the right was laid by Perrie, the Araucana mix.

I will not be cooking with Snowball’s egg. It will be saved for a photo shoot for a children’s book, called, appropriately, Snowball Lays an Egg. It is a silly work of fiction in which Snowball has decided not to lay her eggs in the coop. I won’t give the story totally away, but I will tell you that she will be posed in tableaus filled with vintage chicken items and that in each photo, her egg will be hidden somewhere on the page.

How will I get her to pose for the camera? In the next few weeks, I’ll be training Snowball to stand on a post-it note. Yes, this is easy to do with chickens! They are so food motivated. I’ll be using clicker training. (This is the same technique used to train dolphins to jump through hoops.) You’ll be hearing more about this in the future.