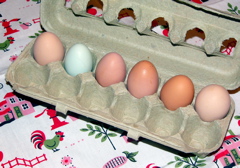 I got a nice email from a hencam regular in Canada who wanted to know how I can tell which egg came from which hen. Each breed of hen lays a distinctive egg, both in size and color. That’s how I know that the blue egg is from Perrie, the darkest egg (second from the right) is from one of the Australorps, and the buff-colored big, rounded egg on the right is from Buffy. The uniformly medium-brown eggs are laid by either Marge or Petunia, the New Hampshire Reds (Marge, BTW, is the fat hen, Petunia is the skinny one) and the eggs that have subtle dark speckles are from our Barred Rocks.

Usually the eggs from hens of the same breed look so similar that I can’t tell if it was, for example, Blackie or Twinkydink, that left the egg in the nesting box. It helps to watch hencam because I can see which box which girl is in! But, sometimes a hen lays an egg that is unmistakably her own. Ginger lays an egg that is pointy on both sides. I can even pick out which egg is hers out of a bowl of peeled hard-cooked eggs.

Once cooked, all of the eggs taste the same. Except for Snowball’s. If that slacker would ever start laying, I could show you how, the smaller the egg, the larger the percentage of yolk. Make an omelet with Snowball’s eggs, and it will be the richest, yellowest, omelet you ever had.