It takes about 26 hours for the from the time that the yolk is released from the ovary until the egg is fully formed and comes out the vent. Egg laying is a complicated process. Once that yolk is in transit through the oviduct, it gets surrounded by more yolk, then white, then gets enclosed by the shell (which requires about 15 hours to fully form) until it’s finally dropped into the nesting box. This process works like a conveyor belt. Even as the first egg is being laid, another is starting its journey through the system. There can be glitches. Sometimes an egg is missing the yolk, or the shell, or is a weird shape or teeny tiny or especially huge. When an egg stops moving along the tract, then your hen is egg bound. As you can imagine, this can cause all sorts of issues. Not only will eggs back up behind the stuck one, but also, since the egg shares the same outlet as the digestive tract (the vent), it will be difficult for her to expel manure. She’ll be miserable. She’ll die if that egg doesn’t come out.

When a hen is egg bound she is in obvious discomfort. An egg bound hen stands more upright than usual and walks like a penguin. Her abdomen might feel bloated. She might be sitting in a nesting box, tilted with her tail up, her vent opening and closing, looking like she’s straining. However, these are not definitive indications that she is egg bound because these are also the symptoms of many other ailments. In fact, it is very rare that has an egg stuck in her oviduct. More often than not, what you think is an egg bound chicken is actually a hen that is quite sick from something else.

It is very, very rare that a perfectly formed egg is stuck at the lower end of the tract near the vent. In twenty years of keeping hens, I’ve never had such an egg bound hen. But, it does happen. If this is the case, you might be able to see or feel the stuck egg just inside the vent. Slather vaseline on a (gloved) finger and feel up her vent. If you reach the obstruction, try to grease it to help it along.

Sometimes, with the stuck mass further up the hen, what she needs is to get the both the reproductive tract and the digestive tract active. Although these two systems are separate, a problem in one affects the other. When the digestive tract stalls, manure can build up and block the movement of the egg. Likewise, buildup in the reproductive tract can block the expelling of waste. There’s a simple remedy for this situation. A hen that looks miserable and constipated needs what I call The Spa Treatment – a nice, long warm soak in an epsom salt bath. (Read the FAQ for an explanation of how the epsom salts work.)

Here is Jasper having a soak. 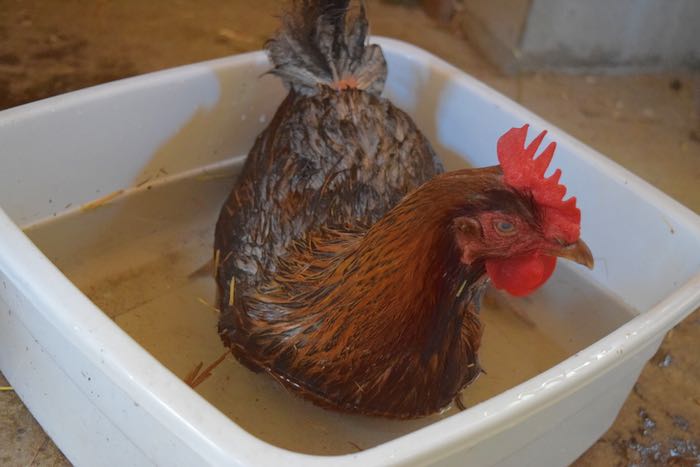 It looks like she’s enjoying the bath, doesn’t it?

With any luck, manure and an egg will pass and the hen will be fine.

Just keep in mind that an accurate diagnosis isn’t possible until after the fact. If she recovers without expelling an egg, then you know that it was a different issue that caused her to look poorly. Sometimes, despite the best care, a hen dies. That allows me find out exactly what went wrong. I do necropsies on all of my deceased birds. Over the years I’ve done more than twenty of these. In many cases, the external symptoms were the same – that penguin stance, lack of appetite, and straining at the vent. Of all of the hens that I’ve examined, only one was truly egg bound. The others had, among other ills, tumors, cancer, ascites and internal laying.

So, all of this is to say that being egg bound is a rare occurrence, however an accurate diagnosis isn’t necessary for knowing what to do next. If the hen can be saved, she will be with the Spa Treatment. I’ve had many hens bounce back after a rejuvenating soak. It’s worth a try. And, if it doesn’t work, you’ll know that you did your best.