Almost all chickens have external parasites and lice are the most common. Your birds can live with a few lice crawling on the skin under their feathers. So can you. These bugs are specific to your chickens – they are not the same lice that children get on their scalps! Poultry have ways to keep these parasites under control. However, when health or housing isn’t optimum the external louse load can explode and cause problems.

There are 40 to 50 species of lice found on domestic poultry. They are all soft-bodied, pale-colored, flattened-bodied insects. None suck blood, but they do have mouth parts that chew on feathers and scales from the skin. If there’s a large population of lice living on your hen, they will cause irritation and can be so annoying that the bird will fail to thrive. 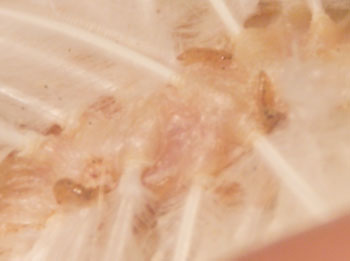 The entire life cycle of these pests occurs on the fowl, which makes them fairly easy to control, since they don’t live in dirt and wood or in intermediary hosts like beetle larvae. Lice can live only a couple of days off of their host, so even in the worst infestations, a thorough coop cleaning and ridding them from the birds, will take care of the problem.

A hen’s first line of defense against lice is to dust bathe. This is when a hen finds a wallow of loose, warm dirt, lies down in it, kicks it about and gets it under her feathers. The dirt kills off the soft-bodied lice by both dessicating and shredding them. Add some food-grade diatomaceous earth (DE) to your flock’s favorite dusting area, and you’ll be sure to kill off the lice. The DE is jagged and lacerates the lice. DE is derived from diatoms – microscopically small water creatures. Be sure to only use food-grade DE. Agricultural DE, used to kill slugs, etc, is derived from sea diatoms, is very sharp, and it will shred chicken’s soft tissues if ingested! In the winter when the ground is frozen, and during times of mud and cold, hens can’t dust bathe outside and the louse population explodes. I remedy this situation by half-filling an inexpensive kitty litter tub with coarse builder’s sand and then add a cup of food grade diatomaceous earth (DE) to the mix. 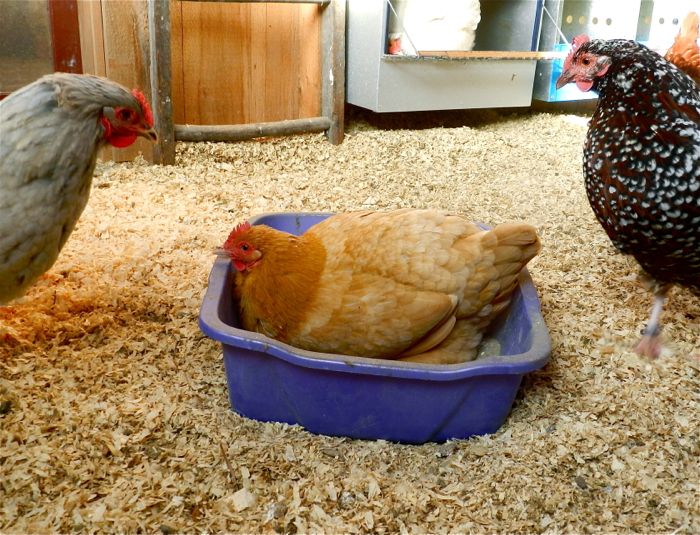 DE is often touted as the be-all and end-all of parasite control. It is effective for lice, but for situations in which the lice are running rampant I use a louse powder with permethrin as the key ingredient. Most feed stores sell poultry louse powder in a shaker cardboard tube that looks like Ajax for your kitchen. Permethrin is the synthetic form of pyrethrum, an organic insecticide derived from flowers. Poultry keepers have used pyrethrum for over a hundred years. My 1895 Biggle Poultry Book recommends it. Permethrin is more stable, with a longer shelf life and so that’s what is sold. It’s safe for poultry, but toxic to cats and fish. I only use it when I know that my hens are enclosed in their coops and not going anywhere.

Louse eggs are not killed by dust baths or DE, and so it is essential that your hens always have access to a dust bathing area, so that as eggs hatch, the lice are killed immediately.

Along with dust baths, your hens keep their parasite load to a healthy minimum by preening. But, a hen that is not feeling well, or one that is elderly and not energetic, or a hen from a factory production facility that has had her beak burned off, cannot preen. Often, a louse infestation is the first sign that something is amiss with your chicken. For that reason alone, it’s a good idea to check your hens every few weeks for lice. Since lice tend to congregate near the vent, you have to pick pick up your hen, turn her over and part the feathers under her tail. I’ve made a video to show you how. You might see tiny, yellowish insects moving. Or you might only see feathers that look like Q-tips. 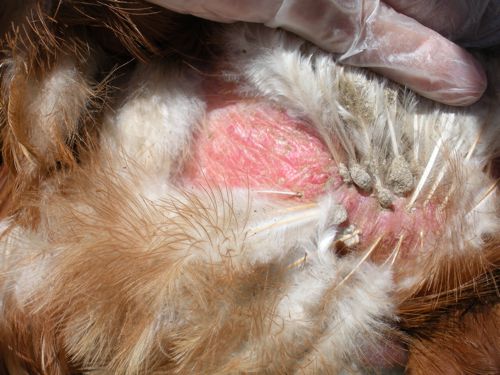 The cottony area at the base of the quill are the egg sacs. These can be so large and numerous that they irritate the skin and ruin the hen’s feathers to the point that even preening can’t remove them. In that case, you might want to bathe your hen. It’s not essential for her health, but it will make her life more comfortable. Chickens, although they don’t like to wade in water, surprisingly do like this “spa” treatment. I have a video to show you how to bathe (and blowdry!) your hen.